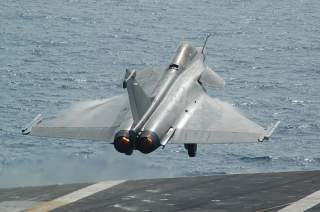 Influential members of the Saudi Arabian government believe that the United States—the kingdom’s most valuable strategic ally since 1945—has abandoned Riyadh on a host of regional issues, most notably Iran’s nuclear program. As the Saudis respond by seeking to enhance their political and economic relations with powers other than the United States, France sees an opportunity to supplant Washington as Riyadh’s closest ally. While it remains unlikely that Paris will entirely replace Washington as Saudi Arabia’s most important ally, France can compete with the United States to become the kingdom’s top supplier of advanced military technology in the future.

Following the interim nuclear agreement of November 2013, French officials joined their Saudi counterparts in questioning whether Tehran could be trusted, and Iran’s commitment to ending its ability to build a nuclear bomb. While it remains to be seen how the recently signed Iranian nuclear agreement will impact Paris and Tehran’s relationship, of all parties in the P5+1 talks, France is said to have taken the toughest stance against the Iranian nuclear program, which has not gone unnoticed in Riyadh.

French Arms Deals in the Gulf

Although France’s economy barely maintains positive GDP growth rates, its arms industry is booming. As the world’s fourth largest arms exporter (behind the United States, Russia, and China), France sold nearly double the amount of arms in the first five months of 2015 (more than $16 billion) than in all of 2014. From 2010 to 2014, 38 percent of French arms exports went to the Middle East, making it the most important region for the country’s arms industry (30 percent went to Asia; 13 percent to Europe; 11 percent to North and South America; and four percent to Africa). France’s arms sales for the first half of 2015 created more than 30,000 jobs— significant for a country grappling with record high unemployment.

In May, French President François Hollande visited Riyadh to address a Gulf Cooperation Council (GCC) summit (the first time a non-GCC head of state has done so) and to launch a strategic initiative between France and the Council. Hollande spoke of the GCC facing “dangers emanating from countries’ designs and interference in (GCC) internal affairs,” a clear reference to Iran. Hollande’s address was delivered one day after he was in Doha, where he signed a $7 billion deal that included the sale of 24 French Rafale fighter jets to Qatar, along with the training of Qatari intelligence officers.

In 2013, President Hollande, Foreign Minister Laurent Fabius and Defense Minister Jean-Yves Le Drian traveled to the kingdom to meet with the late King Abdullah, other Saudi officials, former Lebanese Prime Minister Saad Hariri and Ahmed Jarba of the Syrian opposition. A delegation of 30 businesses accompanied Hollande on his visit, which ended with the signing of a deal in which France pledged $3 billion of French weapons for the Lebanese Army (a grant worth twice as much as Lebanon’s entire military budget).

Saudi Arabia’s growing interest in fostering a stronger alliance with France should also be understood within a grander geostrategic context, in which Washington’s traditional Sunni Arab allies have become frustrated and confused by U.S. foreign policy on a plethora of issues, such as the “Arab Awakening”, human rights and the Iranian nuclear agreement. Officials in Saudi Arabia, as well as Egypt and other GCC states, have sought to explore deeper partnerships with powers beyond the United States.

The United Kingdom’s decision last year to double down on support for Bahrain by opening a naval base in the island kingdom (which marked the British navy’s first permanent return to the Gulf since the British officially departed in 1971) was rich in symbolism. As the Obama administration’s rhetoric condemning Bahrain’s human rights violations has fueled tension in U.S.-Bahrain relations, Manama’s growing military alliance with London factors into the Bahraini leadership’s determination to explore relationships with other powers. Qatar and Kuwait’s recent signing of defense deals (and talks of others) with France, Germany and Italy fits into the same geopolitical context. Apart from the gradual thaw in U.S.-Iran relations, the Obama administration’s declared pivot-to-Asia (a shift away from the Middle East) has prompted reconsideration of basic post-World War II geostrategic and security norms in the oil-rich Persian Gulf.

Perhaps nowhere has Riyadh’s interest in diversifying its strategic partnerships been as evident as the kingdom’s recent dealings with Russia. Deputy Crown Prince and Minister of Defense Mohammed bin Salman’s visit to St. Petersburg last month—where he signed agreements in the areas of nuclear technology sharing, oil production, and space exploration—sent a clear message to the United States that the kingdom will not hesitate to collaborate with Washington’s rivals to gain leverage by taking advantage of Moscow and the West’s deteriorating relationship.

However, given Russia’s growing alliance with Iran, ongoing strong support for the Syrian regime, opposition to the Riyadh-led military campaign in Yemen, and the Kremlin’s anger over the kingdom’s oil production policy, there are a host of issues that will likely prevent Russia from supplanting the United States as Riyadh’s key ally. Similarly, although China’s quest for energy in light of its economic explosion has enabled the Saudis to keep a foot in both the U.S. and Chinese camps by buying arms from Washington while selling an increasingly sizable portion of its oil to China and other Asian countries, Beijing’s position on various regional issues (most notably, Iran and Syria) will similarly limit the extent to which China could supplant the United States as the kingdom’s key ally.

Although Saudi Arabia finds more support for its foreign policy agenda from France than from other world powers, a growing French-Saudi alliance faces its own complications. Just as U.S. criticism of Saudi Arabia’s human rights record does not sit well with officials in Riyadh, France’s condemnation of the kingdom’s liberal use of capital punishment undoubtedly annoys Saudi officials. While in Saudi Arabia for the GCC summit, Hollande called on the kingdom to abolish the death penalty (the previous day Saudi authorities executed five foreigners on charges of murder and robbery).

At the same time, French public opinion is a factor as Paris weighs strategic and moral costs. Following France’s sale of 24 of its own Rafale fighter jets to the Egyptian government, Julien Bayou, spokesperson for the EELV (France’s green party), denounced “the delivery of weapons of war to a military dictatorship whose violations against human rights…are now legion.” Given Saudi Arabia’s abysmal human rights record, opposition to selling arms to GCC countries may create a political dilemma for French officials, as it has recently in Germany.

A potential improvement in French-Iranian relations—both in economic and security spheres— following the June 14 agreement could erode France’s image as the most hawkish world power on Iran. France’s businesses, like those of most European countries, see Iran as a potentially lucrative market once the sanctions are lifted. Fabius visited Tehran earlier this month, marking the first trip of a French diplomat to Iran in 12 years, to discuss bilateral trade with Iranian officials.

In late July, PSA Peugeot Citroën’s CEO announced that the company reached an agreement to sell its DS model in Iran (until three years ago, Iran was PSA Peugeot Citroën’s second largest market and the French car manufacturer sold nearly half a million vehicles in Iran each year until western economic sanctions were imposed.) In addition to PSA Peugeot Citroën, other French businesses—including Total and Renault—are eyeing a reopening of the Iranian market with great anticipation. In September, representatives of the Mouvement des Entreprises de France (MEDEF)—France’s largest employers’ federation—are expected to visit Iran.

The EU and Iran’s mutual concerns about Daesh (the Islamic State) in Iraq and Syria have led European officials to also explore the idea of greater European-Iranian cooperation in security sectors. Late last month, EU foreign policy chief Federica Mogherini met with Iranian Foreign Minister Mohammad Javad Zarif in Tehran, where the two diplomats discussed regional issues. Mogherini hailed the nuclear deal as having “the capacity to pave the ground for wider cooperation between Iran and the West.”

From the Saudi Arabian perspective, the reintegration of Iran into Western-led economic and security initiatives would constitute a strategic loss for Riyadh, which sees its rivalry with Tehran as a zero-sum game. Indeed, if the international community views Iran as compliant with the July 14 agreement throughout upcoming months and years, relations between the West and Iran have much potential to improve significantly, even if it will take years for relations to fully normalize with Iran.