France Will Get Over Its Anger at Washington 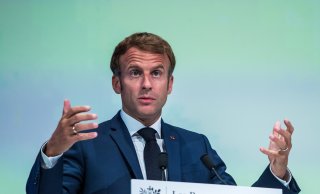 Australia’s cancellation of its purchase of twelve French Shortfin Barracuda-class diesel-electric attack submarines—in favor of a new class of nuclear-powered submarines to be developed with American and British support—has set off a firestorm in Paris. French defense minister Florence Parly stated that it was “very bad news with regards to keeping one's word.” Her counterpart at the Quai D’Orsay, Foreign Minister Jean-Yves Le Drian went further, calling the deal a “stab in the back,” a term the German military famously used to blame civilians, leftists, and Jews for the Armistice that ended World War I. Le Drian later stated that the Australian submarine deal with the United States and Britain, which was accompanied by a new technology sharing agreement, called AUKUS, was a product of “duplicity, disdain, and lies.” Clearly unable to contain himself, he also said that “this brutal, unilateral, unpredictable decision looks very much like what Mr. Trump used to do.”

Both ministers also issued a joint statement placing as much blame on the United States as on Australia, and stating that “the American decision…signals a lack of consistency which France can only notice and regret.” And to emphasize its anger, for the first time ever Paris recalled its ambassadors to Washington and Canberra. France did not recall its ambassador to London, because, as it rather impolitely put it, Britain was nothing more than a “third wheel,” in the tripartite arrangement.

Yet the Shortfin Barracuda program had been a source of worry for Australia for some time.  Originally priced at approximately 36 billion U.S. dollars, the cost had nearly doubled to $65 billion, creating a heavy financial burden for an Australian defense ministry whose total annual budget is less than $30 billion USD. Moreover, the first submarine was not even going to be delivered until 2035.

Australia’s previous defense minister had signaled Australia’s unhappiness as early as 2019. It should therefore have come as no surprise to the French that during his June 2021 visit to Paris, Australian prime minister Scott Morrison made it clear to President Emmanuel Macron that Canberra was exceedingly unhappy with the pace and cost of the submarine program. Indeed, he has announced that Australia is now prepared to pay France’s Naval Group approximately two billion US dollars in termination liabilities just to bring the contract to an end.

Morrison’s unhappiness should have put the French on notice that the Barracuda contract was in deep trouble.  Moreover, it is inconceivable that French intelligence had no inkling that an American-British-Australian deal was in the works. Australian officials had reached out to their American counterparts shortly after the Biden Administration took office indicating that they wanted to walk away from their arrangement with France.

It is arguable that Paris doth protest too much. Emmanuel Macron is seeking re-election in 2022, and his prospects are at best uncertain. Recent polls show him attracting only twenty-four percent. of the French vote, with hard-right candidate Marie Le Pen just behind him at twenty-three percent. What better way to pump up his popularity than to stoke Gallic suspicion of “les Anglo-Saxons,” especially as the three countries are members of the “Five Eyes” intelligence group (the others are Canada and New Zealand), which has never included the French. The submarine flap also enables Macron to underscore to France’s EU partners—all of whom had no inkling that a deal was imminent—that they must seriously consider his proposal for European “strategic autonomy.”

In any event, this latest controversy is unlikely to do any lasting damage to France-American relations. That was the case when France refused to support America’s 2003 invasion of Iraq, much to Washington’s anger. Despite bitterness on both sides, the two countries continued to work together in Afghanistan, the Indian Ocean, and elsewhere. Nor did then-French president Jacques Chirac pull France out of NATO’s integrated military command, as Charles de Gaulle had done in 1966. Just as the split over Iraq healed relatively quickly, so too will this crisis pass.

France and the United States, as well as Britain and Australia, recognize the need to confront an increasingly assertive China. Beijing’s leaders are aware that fast, quiet heavily armed nuclear submarines pose the greatest threat to both their navy and to other forces as well. It, therefore, is hardly surprising that Beijing has attacked the new arrangement with a ferocity that matches if not exceeds that of Paris. That China is so unhappy with the new arrangement is not at all a bad thing, however. Perhaps it will convince Beijing that its military policy is counterproductive and that the United States and its allies will no longer sit still in the face of its aggressive behavior.