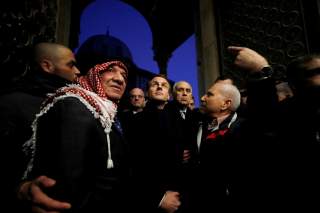 IT IS often said that there is a Muslim problem in France. But that does not mean that French Muslims themselves are necessarily its cause, any more than that Jews were responsible for the Jewish Question in nineteenth- and twentieth-century Europe.

The French Muslim world is large and heterogeneous and defies facile generalization. Unfortunately, facile generalizations abound. The French Muslim “problem” is frequently the subject of heated ideological debates and gross simplifications, which obscure (often intentionally) rather than enlighten. French Islam is often seen in terms of religious essentialism and determinism, ignoring the diversity of Muslim practice and historical experience. But religion is only one element of the story. Few Muslims have anything to do with terrorism, yet, understandably, hideous acts of terrorism committed in the name of Islam cannot fail to frighten fellow citizens and make it more difficult for Muslims to be accepted as Frenchmen “like everyone else.” In this context, Islamism and self-segregation on the part of some Muslims also play into the hands of racists.

If some French Muslims are not well integrated in French society and are ambivalent about their relationship with the Republic, much of the reason lies in long-term historical and social factors. These factors cannot be dismissed as “mere history”—they continue to shape attitudes and behavior. Historical memory must be reckoned with.

Yet history is not destiny: Muslims are not just victims of history and institutional racism; they are engaged in advancing their interests on an individual and collective level. And even if the values of the French Republic were misused in the past to justify racism and colonialism, they can also serve as a means of emancipation today.

France is a grand laboratory for the relationship between Islam and Western society. It has the largest Muslim population in Europe, overwhelmingly composed of immigrants from its former colonial empire. Can France create a harmonious relationship with a population whose ancestors suffered much from French colonialism? And what does France’s experience say about Europe’s ability to integrate Muslims?

THERE ARE five main factors that have contributed to the marginalization of Muslims in France, primarily those from Northern Africa.

The second factor is the timing of North African immigration. Immigration, in general, is always a charged phenomenon, but there are times which are better than others. It can be argued that an expanding industrial economy creates ideal conditions for social integration, not that integration is ever easy. Muslims came to France at a time of great economic expansion, when many jobs were available for unskilled workers in the industrial sector. These immigrants were working class: they could identify with the native French working class and the local trade union movement. Ironically, in their opposition to the status quo, the trade unions and the French Communist Party (PCF) played an important role in turning immigrants into “Frenchmen.” Had these economic conditions persisted, North Africans might have been integrated into the French working class like previous immigrants. But most of these Muslim immigrants joined the workforce at the end of the industrial era. France was shifting into a post-industrial economy; manufacturing jobs were being shed fast. Woe unto those lacking education and other kinds of commercial skills, who end up economically marginalized.

The third factor is the unintended consequences of post-war French urban planning. After World War II, France built vast housing projects outside of major urban areas for the native French population. They were a technocrat’s delight, but their isolation and brutal modernist aesthetic were not what the French population wanted. Once the opportunity arose, they left, and these cités increasingly became segregated immigrant enclaves.

The fourth factor is the concept of laïcité—the particular way the French state handles its relationship to religion subsequent to the separation of church and state. The separation, which occurred in 1905, had nothing to do with Islam; it was the result of a long history of conflict between the Republic and the Roman Catholic Church. But the legacy of suspicion, and even hostility, towards religion, in general, affects attitudes towards Islam.

The fifth factor is the impact of external developments in the broader Islamic world on French Muslims. These developments took two forms. The first was the growth of a more fundamentalist approach to Islam that was reflected in France by tendencies towards greater piety, outward observance, and self-segregation. The second, not unrelated but analytically quite different, was the advent of Muslim extremism and terrorism, first outside of France—the Iranian Revolution, the Rushdie Affair, the attack on the World Trade Center—then within France, perpetrated by French residents or citizens: Charlie Hebdo, Hyper Cacher, Bataclan, Nice. As a result, French Muslims were called upon to answer for what other Muslims did.

Each of these factors must be understood at length before a resolution can be advanced.

THAT COLONIALISM was inherently oppressive and exploitative is hardly news, but the impact on Algeria was particularly problematic and left a bitter legacy. Settlers, as well as taking control over the cities, took over vast areas of the best arable land, leaving marginal tracts to the indigenous population. Limitations on settlement ended under the Third Republic, extending the European footprint to the most fertile areas of the country, often by expropriation, legal skullduggery, and the elimination of the habous (endowed properties to provide income for mosques and charities). The existing structures and elites of Algerian society were destroyed. The French did very little to provide education for the indigenous population, since the last thing the settlers wanted was an educated population more likely to resist and/or demand higher wages. After all, the whole reason for the colony was exploitation. And a colony it was, even if in theory it was an integral part of France. It combined features of being part of the Republic (representation in Parliament) with some elements of home rule by the settlers. What was particularly galling was the hypocrisy of France—the ways in which it eluded the principles of the Rights of Man which it had pioneered in 1789.

Although all those living in Algeria were nominally French citizens, in practice the population was divided into three castes: those living by French law, Jews (who obtained French citizenship through the Crémieux Decree of 1870), and those living by Muslim (sharia) law. In the late nineteenth century, Muslims were subject to the infamous and humiliating Code de l’indigénat: they enjoyed little legal protection, paid heavier taxes, and had few political rights. To change from Muslim status to French status required an individual application. Settlers were successful in making this application very difficult, and it was a point of honor for most Muslims, even those with a French education, to not “change sides.” The vast majority of Algerians were, therefore, by legal definition, “Muslims.” Thus, it was French law which defined the non-settler population of Algeria as Muslim—that was their official legal identity. This shaped the future, helping explain why independent Algeria would emerge as an Islamic republic and why later Algerian immigrants to France (and their descendants) often continue to consider themselves as Muslims rather than take on a distinct French identity. For many Algerian immigrants, France’s republican values were, and maybe are, forever tarnished.

The catastrophic process of decolonization in Algeria further poisoned the relationship. Eight years of bitter war, enormous casualties, vast destruction, the ravages of the Organisation Armée Secrète paramilitaries at the end, and the wholesale departure of embittered French settlers and the harkis—Algerians who fought for the French and who, if they escaped, were basically warehoused in camps by the French for decades. Few experiences of decolonization were so traumatic. The Algerian catastrophe made much of the French population profoundly suspicious of Muslim immigrants from North Africa and deepened the antagonism of the latter towards France. But that is not all. There is another problem that has complicated the possibility of vivre ensemble—the way in which historical memory of the Algerian trauma was repressed. Simmering tensions emanating from the Algerian trauma continue to roil beneath the surface, generations after the war ended. Perhaps the most noxious result of decolonization was that it engendered a political party that has carried on—with no little success—the battle against acceptance of North Africans on the North side of the Mediterranean: the National Front (now Rassemblement National).

VICTIMIZED BY French colonialism, Muslims became a kind of undercaste in their own countries. In Algeria, the survival of the precarious village economy required that peasants be sent to work on a temporary basis in France. The push from North Africa corresponded to a pull from France, which needed unskilled industrial workers. Eventually, by the 1970s, this pattern of migrant labor turned into de facto permanent settlement.