France's Pivot to Asia: It's More than Just Submarines 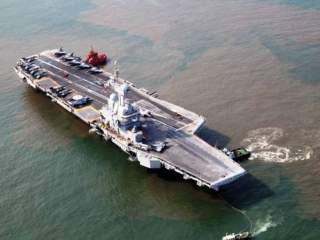 On April 26, France’s defense shipbuilding company DCNS secured a victory in winning, against Japan and Germany, a long-awaited $40 billion Australian submarine deal. It may not come as a surprise to anyone who has been following France’s growing interest in the Asia-Pacific for the past five years. Since President François Hollande’s 2012 election, the country has launched an Asia-wide initiative in an attempt to halt declining trade figures and improve its overall leverage with the region.

Visiting New Caledonia last weekend, Prime Minister Manuel Valls immediately decided on the spot to fly to Australia to celebrate the submarine news. Having been at odds in the 1990s over France’s decision to test its nuclear weapon capacities on an isolated Pacific island, Paris and Canberra have begun a close partnership over the last decade, culminating in the decision by Australia’s Prime Minister Malcolm Turnbull, in power since September 2015.

Unlike its Japanese competitor Mitsubishi Heavy Industries (MHI), DCNS promised to build the submarine main parts on Australian soil, creating 2,900 jobs in the Adelaide area. The French also secured support from U.S. defense contractors Lockheed Martin and Raytheon, one of which will eventually build the twelve shortfin Barracuda submarines’ combat systems. Meanwhile, this unexpected victory, in light of the close strategic relationship between Australia and Japan, has shed light on France’s sustained ambitions in the Asia-Pacific region. Thanks to its overseas territories of New Caledonia, Wallis and Futuna, French Polynesia and Clipperton Island, France has the world’s second-largest maritime domain. It is also part of QUAD, the Quadrilateral Defence Coordination Group that also includes the United States, Australia and New Zealand, and which coordinates security efforts in the Pacific, particularly in the maritime domain, by supporting island states to robustly and sustainably manage their natural resources, including fisheries.

France is also attempting to correct an excessive focus on China by developing new ties with India, Japan, South Korea and Southeast Asian countries, which have all received a number of French ministerial visits. France’s overseas territories also include a presence in the southern part of the Indian Ocean, with the islands of Mayotte, Réunion and the Scattered Islands, and French Southern and Antarctic Territories, as well as the northwest region of the Indian Ocean through its permanent military presence in the United Arab Emirates and Djibouti. Altogether these presences encompass one million French citizens. This sets France apart from its fellow EU member states regarding defense and security in the Asia-Pacific, particularly as France is a top supplier of military equipment to several Asian countries including Singapore, Malaysia, India and Australia. Between 2008 and 2012, Asian nations accounted for 28 percent of French defense equipment sales, versus 12 percent during 1998–2002. (More broadly, 70 percent of European containerized merchandise trade transits through the Indian Ocean.)

Despite its unique position, France is also supportive of a joint European Union policy toward the region, especially when it comes to developments in the South China Sea. Last March, with support from Paris, Berlin, London and other members, Federica Mogherini, the EU’s High representative for Foreign Affairs and Security Policy, issued a statement criticizing China’s actions:

“The EU is committed to maintaining a legal order for the seas and oceans based upon the principles of international law, as reflected notably in the United Nations Convention on the Law of the Sea (UNCLOS). This includes the maintenance of maritime safety, security, and cooperation, freedom of navigation and overflight. While not taking a position on claims to land territory and maritime space in the South China Sea, the EU urges all claimants to resolve disputes through peaceful means, to clarify the basis of their claims, and to pursue them in accordance with international law including UNCLOS and its arbitration procedures.”

This does not mean that France is neglecting its “global partnership” with China. In 2014, the two countries celebrated fifty years of diplomatic relations; both governments conduct annual bilateral dialogues on international and security issues. But as a key EU state, a permanent member of the UN Security Council and a significant contributor to tje Asia-Pacific’s security, France has launched a multidimensional Asia policy.

All of this should be seen as welcome news by Washington. While there would have been advantages to any of the three worthy bids, a greater French role in the Asia-Pacific should be beneficial. At this crucial historical moment in China's rise and the region's broader blossoming, the United States needs a strong and engaged European partnership to encourage Beijing in the right direction and push back together when that does not occur. Acting in concert with some of the world's other major democracies can add further legitimacy to America's actions to uphold the international order in the Asia-Pacific. To be sure, Japan, South Korea and Australia are key U.S. partners here and will remain so. But each also has its own limitations (and in Japan's case, a great deal of historical baggage in dealing with China).

European states are already heavily involved in economic interactions with China. The submarine decision will help ensure a broader European role that includes a hard-headed perspective on security trends as well.

Philippe Le Corre and Michael O’Hanlon are scholars at the Brookings Institution in Washington.