Freedom of Speech with Islamic Characteristics 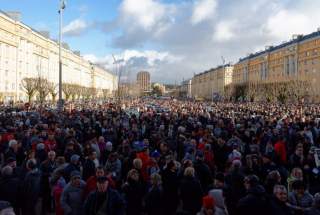 The outpouring of rage over Islamic extremism in Europe has reignited the familiar critique of Islam as an intolerant faith whose adherents are inherently pre-modern and unable, or unwilling, to adopt or accept Western values.

Sadly, this “secularist” narrative has changed little, if at all, in the twenty-six years since the Rushdie Affair, when the author, Western governments, and the writer’s millions of supporters affirmed his absolute right to defame the Prophet Mohammad and thereby insult 1.6 billion Muslims in the novel The Satanic Verses.

Almost three decades later, it seems that irreconcilable differences between Muslims and non-Muslims remain over freedom of expression. Yet, it is worth asking, is the Western commitment to freedom of expression as absolute as today’s anti-Islam rhetoric would suggest? Or is something else at work here, an underlying anti-Islam campaign dressed up in the language of civic rights?

A quick glance at European law and practice strongly suggests the latter. While blasphemy laws have shifted their focus since the 19th century, European courts today regularly rule that insulting a person’s religion improperly inhibits the right to practice that faith freely.

Separately, France, Germany, and Austria all make it illegal to deny the Holocaust, and virtually all nations worldwide attempt to regulate pornography, bar incitement to imminent violence, and prohibit yelling “fire!” in a packed cinema. And neither the Charlie Hebdo case nor the Danish cartoons affair is a “clean” example of free speech at work, for in both cases there is ample evidence that overt Islamophobia was also at work.

The Muslim world is, of course, well-aware of Western limitations on free speech. Now, they wonder, how is it that images ridiculing their holiest figure have become a litmus test for press freedom – and even a proxy for “modernity” – while issues closer to the concerns of Europeans, say the Holocaust and its aftermath, remain off-limits?

And it is not just Muslim extremists who believe their faith is under attack. Since the Danish newspaper Jyllands-Posten published twelve editorial cartoons, most of which depicted the Prophet Mohammad negatively, Islamic religious scholars and Arab leaders have been engaged in a debate with their Western counterparts over the limits of free expression according to Islamic law.

In the aftermath of the Charlie Hebdo violence in France, when eight staff members were killed, Jordanian Foreign Minister Nasser Judeh called for prohibiting any cartoons that target religious beliefs. “What is happening now is merely a conflation of freedom of expression and defamation/slander. This in turn leads European leaders to defend defamation or to justify it as being freedom of expression.”

The Koran, from which Islamic religious scholars interpret the challenges of modern life, restricts free speech when it does harm to others. Criticism is not permitted in instances of dogma, or in matters directly identified in the Koran and Sunnah, the part of Islamic law that is based upon the words and teachings of the Prophet.

Islamic religious scholars have been clear for years in delineating the differences between the legal limits of freedom of expression within Islam, according to the sharia, or the body of Islamic laws. Back in April 2009, the Council of the International Islamic Fiqh Academy, an initiative of the Organization of the Islamic Conference, declared that the most important sharia limitations on freedom of expression include:

• Freedom of expression must not lead to a disruption of public order or strife between Muslims.

• Freedom of expression must not contain an attack on religion, its symbols, its rulings and sanctities.

• The purpose of freedom of expression must be aligned to God’s will and serve the public and private interests of Muslims.

The recommendations of the Fiqh Academy included:

• Guaranteeing the protection of freedom of expression in line with the sharia by issuing laws to protect it and ensuring the existence of a fair judiciary.

• Drafting an international document among Islamic states to protect religious feelings and sanctities from any encroachment, criticism, or distortion under the guise of art or freedom of expression or any other excuse.

Similarly, the Arabic-language Journal of Sharia and Islamic Studies, has written about the differences between freedom of expression in Islam and in liberal societies. These include:

•   Difference in the content of what can be expressed and the existence of certain sanctities in Islam.

With Europe’s rapidly growing Muslim population and the world’s increased globalization and digital connectivity, it is important to understand the traditions that inform this important constituency, its views, and practices. It is important for these groups to integrate and feel that they are fully part of these societies. And it is worth recognizing that they, too, have a claim on the legitimate protection of their sensibilities and values, in particular when they are too weak socially, politically, or economically to defend themselves. The alternative, as we have seen all too tragically, is more violence carried out in the name of religious claim.

It should be pointed out that the concept of freedom of expression means different things to different people, with some willing to limit its reach for the sake of peaceful coexistence and others believing it is limitless to the point where it can and should be offensive. Stereotypically, it could be argued that Muslims would agree with the former interpretation while Westerners would agree with the latter.

While this may be true to a certain extent, a number of democracies, including the United States, Canada, Australia and the UK, can also be said to conform to the former interpretation. This is best illustrated by the fact that it was generally these Anglophone countries that refrained from republication of the Danish cartoons in 2005, while the same images were front-page news in those European countries facing the greatest social tensions with their respective Muslim underclasses. Something similar happened with the Charlie Hebdo cartoons, which The New York Times – seemingly to its editor’s later regret – declined to reprint.

Often times, decisions are made by governments and the media to accept those limitations for greater purposes than ourselves, such as maintaining public order or protecting national security. And how many times have we deemed it acceptable for freedom of information to yield to the right to privacy? In this case, the exercise is then to try to find the right balance between the legal right to publish and the moral and ethical implications of exercising that right. In other words, just because someone has the right to publish an offensive image, does not make it the right thing to do.

Over two decades, Muslims and non-Muslims have been talking pass one another: there is moral outrage among Muslims over lampooning the Prophet and determined efforts among non-Muslims that their notion of free expression should not be limited. The problem has escalated because of the growing numbers of Muslims living in non-Muslim societies, as well as the wars initiated by Western governments in Muslim lands. As a result, both sides have become more extreme, which makes it incumbent upon the freedom fighters in the West to better understand their Muslim citizens.

Geneive Abdo is a fellow in the Middle East Program at the Stimson Center and a non-resident fellow at the Brookings Institution. Jonathan Lyons is an independent scholar and author of, among other works, Islam Through Western Eyes: From the Crusades to the War on Terrorism (Columbia University Press, 2013). Lulwa Rizkallah, a research associate at the Stimson Center, contributed to this article.