Frenemies: Why Rival Insurgents Work Together 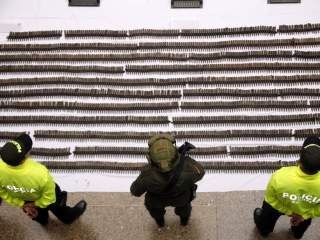 Most studies separate and focus on either competition or cooperation—such as Hanne Fjelde and Desirée Nilsson, Navin Bapat and Kanisha D. Bond, Ely Karmon, Assaf Moghadam, or Fotini Christia—while ignoring the overlap between them.

As a result, huge questions remain concerning the behavior of nonstate armed groups and their interactions. Moreover, if the purpose of scholarly research is to develop competent counterterrorist and insurgency policies, then ignoring the other side of the coin in considering groups’ behavior will undoubtedly result in failed policies.

My research tries to understand that intriguing yet common phenomenon of “coopetition.” Indeed, scholars have ignored that groups can simultaneously collaborate and compete. If this phenomenon exists, it means that cooperation and competition are not mutually exclusive, and that they may have the same causal mechanism and logic. I have borrowed the term coopetition from organizational theory to describe the phenomenon in the behavior of nonstate armed groups.

Interestingly enough, simultaneous cooperation and competition is not restricted to militant groups. This has been observed in firm-level behavior as well as in nation-states. International relations and organizational theory can also help explain relationships among nonstate armed groups, and portray them as more unstable and dynamic than they are usually described.

The issue of competing objectives coexisting is explored in the literature of international relations, especially during the Second World War. Jeffrey W. Legro has explored the question of why nations during those times cooperated, even if they tried to destroy one another. Legro emphasizes the organizational structures of national militaries, including how their beliefs and customs in waging war delimited the use of force.

More recently, the journalist Seymour Hersh has documented how the U.S. Joint Chiefs of Staff indirectly shared intelligence with the regime of Bashar al-Assad. In brief, the senior echelons of the military disagreed with the policy of President Barack Obama's and his State Department toward Assad, and were willing to undermine it.

In firm-level behavior, rules and boundaries exist as to when and where firms collaborate and compete. Nonstate armed groups also create formal arrangements among themselves, but increasingly lack explicit enforcement of guidelines and mandates. This increases the probability that a group will change from collaborator to competitor, or from competitor to collaborator.

Groups exist in an anarchic environment, and their decentralized structure increases ambiguity in the delimitation of their relationships. While certain external institutions can shift them to cooperate or to compete, such as the drug market, their internal features have a very strong hand in delimiting their relationships.

Militant groups, like firms, are composed of individuals who will always have different interests, and may push the groups in different directions. In 2014, the leadership of Syria’s Islamic Front issued a statement in support of anti-ISIS rebels in Atareb, but without declaring war against ISIS. Thus, it hoped to remain neutral toward the rival Islamist group. However parts of the Aleppo-based Tawhid brigade (a member of the Islamic Front) fought against ISIS, even if the leadership did not agree that doing so was one of its goals.

Around 2014, Jabhat al-Nusra showed evidence of suspected clashes in its internal structure and leadership. There were disputes when Maysar al-Juburi, a founding member of the group, was pushed out of his position. As reported by Aron Lund, after his expulsion Saleh al-Hamawi declared that Nusra's Shura Council, tasked with policy and supervision, was superficial and unstable. Moreover, Nusra’s branches in Qalamoun and northern Syria have been split from each other, as reflected in the decentralization of its chain of command.

In the case of ISIS, the risks that Abu Bakr al-Baghdadi runs to his own life, as well the near impossibility of his appearing in public, force him to rely on individuals that do not number among his closest associates. He is suspected of using primitive methods to communicate with his commanders, making direct management of the group harder. Moreover, Baghdadi has already lost many of his closest associates. His original council was made up of eighteen leaders, most of whom were killed in 2014.

Many powers have therefore been delegated from Baghdadi to ISIS field commanders. One could then expect many differences and cracks in the organization. In any case, decentralization in the organization is not only a product of this process, but an inevitable outcome of the group’s nature.

ISIS’s expansion across Syrian territory required a change in the system of governance, and a clear and direct relationship with each city, town or locality that ISIS controls. This is reflected not only in terms of military leadership being local to every territory, but also administratively, in civilian affairs. Al Monitor has reported that management within cities and towns differs from neighborhood to neighborhood, even if they are controlled by the same group.

This should be no surprise, however; in modern nations, towns are controlled and governed differently by different mayors, and different localities of the same city enforce different regulations and decisions.

Further complicating the picture, many of the groups are clashing over prioritizing Syria instead of global jihadism. This is further inflamed by the accumulation of foreign fighters, and the accommodation of some of their requests.

Rather than seeing nonstate armed groups as unitary actors, one must comprehend them as disaggregated groups in the form of different factions under the same umbrella. While there are still layers of bureaucracy in a decentralized structure, decisions come from local members who have a different and more effective knowledge base from which to make them, therefore improving and increasing tactical-level relationships with other groups.

It should be no surprise, then, that different fronts of an armed group have different strategic objectives and that as a result, their midlevel commanders might take different decisions from what their central command expects. Lower-level operators would be further expected to take even more diluted decisions than those goals expected from the leadership.

Even in nation-states there are many forms of deconcentration and delegation of powers, authorities and autonomies. Think of the federal system in the United States, wherein different states are free to make their own laws. Think, then, how defense and wartime legislation has left the U.S. president free to delegate administrative authority to others.

While many say that ISIS and Nusra have always been rivals, others say that they have been allies. In reality, both claims are true, since they cooperate and they compete in space and in time. In Arsal the two actors, in coalition with a faction of the Free Syrian Army (FSA) group, cooperated in joint attacks against the Lebanese Army as well as taking some soldiers hostage, while fighting each other in eastern Syria.

Bassel Idriss, the local commander of the FSA in Arsal/Qalamoun, spoke to the Lebanon’s Daily Star in September 2014, saying he recognized that ISIS and Nusra were critical players in that area, and that it would be very difficult to launch operations against the Assad regime without their collaboration.

In that same year, however, ISIS would kick Nusra and a number of its allies out of an important stronghold in Deir al-Zour that included significant oil fields, an important source of revenue for Nusra.

As we can see, Nusra in northern Syria differs from Nusra in southern Syria. ISIS in southern Syria is different from ISIS in the east. And the same logic applies to the FSA. Throughout the Syrian conflict, all these groups’ fronts have taken different positions toward other armed groups.

Nusra and certain Free Syrian Army groups have both collaborated and fought each other. In 2013, the FSA and Nusra launched an offensive against the Syrian Army in Idlib. In the same year Nusra killed Thaer al-Waqqas, the northern commander of the al-Farouq Brigades (FSA), in reprisal for the assassination of Firas al-Absi. Early in 2014, fighting between ISIS and FSA groups was widespread in the countryside of Idlib and Aleppo.

In late 2013 and early 2014, the Islamic Front fought ISIS in some areas and made peace or aligned with it in other regions, including Aleppo. Ahrar al-Sham and Suqour al-Sham would fight with the Syrian Revolutionaries Front, only to then make peace with it and turn their attention against ISIS (if only at the local lower levels).

Throughout the war in Syria, there have been military strategies described as “operations rooms” (ghurfat amaliyat). These are basically coalitions to grab territory, made up of different militant groups which might have different financial backers or different ideologies. Yet this military concept cannot explain why some actors would ally themselves with others in certain regions, yet fight the same groups in other parts of the country. It is important to note that this is not caused by chaotic or irrational feature of nonstate armed groups. but rather part of a very logical dimension of power and authority.