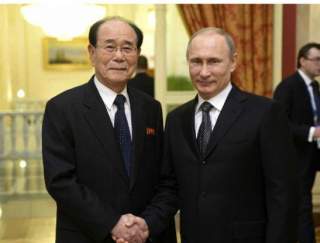 Russia and North Korea make up the latest international odd couple. President Vladimir Putin has recently reached out to one of the poorest and least predictable states on earth. So far, the new Moscow-Pyongyang axis matters little. But Russia has demonstrated that it can make Washington pay for confronting Moscow over Ukraine. It may try to leverage its influence in North Korea to make things harder for the United States.

The Democratic People’s Republic of Korea (DPRK) exists only because of Russia’s predecessor state. The United States and the Soviet Union divided the Korean peninsula, which had been a Japanese colony, after Tokyo’s surrender in World War II. Moscow set up the DPRK in its zone of control.

In 1950, Joseph Stalin approved Kim Il-sung’s plan for a military offensive to conquer the southern half of the peninsula, where the Republic of Korea (ROK) had been established. As the leader of global communism, Stalin could hardly say no to Kim Il-sung. But he distanced the USSR from Pyongyang’s invasion in order to avoid conflict with America.

After the United States and its allies threatened to overrun North Korea, the People’s Republic of China (PRC) intervened massively. The PRC then eclipsed the USSR in Pyongyang’s halls of power; the Sino-North Korean relationship was said to be as close as lips and teeth.

In practice, however, the DPRK’s relations with both communist giants were tempestuous as Kim balanced the two while extirpating all domestic opposition. He disapproved of de-Stalinization and denounced Khrushchev; Kim was later angered by Chinese opposition to turning the North into a de-facto monarchy under the Kim family. North Korea denounced Moscow in 1991 after it recognized South Korea. The North reacted more calmly when Beijing did the same the following year only because Pyongyang had no other patrons to turn to.

Over the last two decades, Russo-North Korean relations have been minimal. The DPRK welshed on its debt and offered few economic opportunities. In contrast, Seoul provided Russia with investment and trade in abundance. Moscow even transferred weapons to the ROK to help pay off Russia’s debts to the South.

Russian President Dmitry Medvedev met with “Dear Leader” Kim Jong-il in 2011, but little came of this meeting. Two years later, President Vladimir Putin held a summit with South Korean President Park Geun-hye, by when it appeared that Russia was beginning to lean towards Seoul. Russia only played a minor role in the Six-Party nuclear talks with North Korea, in keeping with its emphasis on Europe and the “near abroad.”

However, a new entente now appears to be in the works. Last year, Kim Yong-nam, the North’s formal head of state, attended the Sochi Olympics. Throughout the year, the two countries exchanged high-level visitors and inked a number of economic agreements. Pyongyang sent more officials to Russia than the PRC in 2014, capping the year with a trip by Choe Ryong-hae, the unofficial number two in North Korea, Choe sought Moscow’s aid in blocking UN attempts to charge the DPRK with human rights violations. Russia indicated its willingness to host a summit between the two nations’ leaders.

Both governments supplied copious rhetoric. Last fall, Putin harkened back to a “long-standing tradition of friendship and cooperation” and declared that “a further deepening of political ties and trade and economic cooperation is definitely in the interests of the peoples of both countries and ensuring regional stability and security.” Earlier this year, North Korea’s Foreign Ministry declared that the two governments would “deepen political, economic and military contacts and exchanges.”

Putin invited both North Korean leader Kim Jong-un and South Korean President Park Geun-hye to Russia’s Victory Day celebrations in May. If Kim were to go, it would be his first foreign trip as North Korea’s top leader. In contrast, China rebuffed Kim’s request for a meeting with President Xi Jinping. Neither Kim nor Park have announced whether they will attend the celebrations or not. It is also possible that a Kim-Putin summit would take place somewhere else in Russia or perhaps during a Putin stopover in North Korea during a future trip to Tokyo.

Although Russia’s DPRK initiatives are new, the interests at stake are old: stability on the peninsula, denuclearization of the North, improved transportation links through Asia, expanded commercial and energy activities, and enhanced diplomatic clout. Pyongyang is more ready to respond to these overtures with Beijing having turned hostile and diplomacy with the ROK and America going nowhere.

So far Moscow has invested little in its relationship with the DPRK. There is no aid, like the energy and food provided by the PRC. Last year, the Russian government confirmed a 2012 agreement providing for a 90 percent debt write-off of the $11 billion Soviet-era loans North Korea owed Russia. But this came at no cost anyhow, since the debt wasn’t going to be repaid. Despite talk of economic deals, profit is likely to prove elusive for Russia. The North is impoverished, its people lack training, and its countryside has little infrastructure.

As for security, Putin’s government is focused elsewhere. Joint military maneuvers are planned for later this year, but no one imagines the two countries actually fighting together. Pyongyang wants to purchase Moscow’s best fighter, the Su-35, but has little money to buy, let alone maintain and fuel, the planes.

Although the two governments have moved closer, their underlying interests are divergent. Pyongyang wants to diversify its international relationships. Korea is often known as a “shrimp between whales,” a statement especially true of the North, which has been left behind all its neighbors economically, most embarrassingly South Korea. Even the once comparably poor nation of Burma has abandoned isolation and is beginning to move forward economically.

North Korea also wants to find a counterweight to Beijing. During the Cold War, Kim Il-sung maneuvered adroitly between the Soviet Union and China. Since then, the DPRK has unsuccessfully sought to engage America, Japan, and South Korea. The Chinese have grown increasingly irritated with Pyongyang’s determination to build nuclear weapons and refusal to adopt meaningful economic reforms. As a result, the North is more isolated than ever, despite periodic outreach efforts.

Thus, Pyongyang hopes for Russian investment and trade. The DPRK would welcome another friend on the UN Security Council whenever nuclear and human rights issues arise. Even if Moscow provides little of practical value—economic plans are not always executed in the North—possible Russian involvement may encourage the PRC to overlook Pyongyang’s blemishes.

Moscow has a very different perspective. Russian Foreign Minister Sergey Lavrov declared last fall that economic ties were “reaching a whole new level,” but that isn’t saying much. While the DPRK offers some economic possibilities, its poverty and unpredictability reduce its attractiveness as a market. Nor is resource-rich Russia looking for new mineral supplies. Ironically, Moscow’s chief economic interest in the North is as a transit route to South Korea. Already Russia is shipping some coal to the South via a cargo terminal in the DPRK. Among the projects being discussed are railroad, gas pipeline, and power transmission lines from Russia passing through North Korea to the South. In this way the Putin government is interested in northern Korea, not North Korea.

However, as Russo-American relations have deteriorated, especially after events in Ukraine over the last year, Moscow has been looking for other places to counter the United States. Pressing for the resumption of the Six-Party Talks raises Russia’s diplomatic profile, moves Moscow closer to China, and applies pressure on the United States.

Moreover, threatening to turn the Korean peninsula into a new ‘Great Game’ targets the United States in two ways. The first is to apply subtle pressure on Seoul, encouraging it to distance itself from U.S. policy toward Moscow. For instance, Mikhail Bondarenko, Moscow’s trade representative in the South, visited North Korea’s Kaesong Industrial Complex, which is mostly filled with South Korean firms. Russian investment there would leave the North less dependent on its southern neighbor, where some have suggested closing the facility to cut hard currency transfers to Pyongyang. The Putin government does not expect the South to formally break with America, but would benefit from a less enthusiastic application of sanctions.

The second effect of Russian involvement in Korea is that it interferes in Washington’s attempt to isolate and pressure the North. Alexander Galushka, in charge of economic development of Russia’s Far East, predicted a ten-fold increase of trade between Russia and the North to $1 billion annually by 2020. He also cited greater investor interest in the North. Enhanced economic ties would reduce the impact of existing sanctions and make Moscow less receptive to new U.S. proposals to tighten controls. Indeed, in the midst of the Sony hacking controversy, Russia denounced U.S. “threats” against the North.

The Putin government could do more to upend the balance of power in Korea. However, so far, the Russo-North Korean performance is largely an international Kabuki Theater. Greater Russian interest in the DPRK will hinder Washington’s efforts to force North Korea to submit, but China was not going to allow that to happen anyhow, despite Beijing’s deteriorating relations with Pyongyang. The Obama administration may find the North in a less giving mood though. But then, the Kim regime was never planning to negotiate away its nuclear weapons, its most important leverage with the rest of the world.