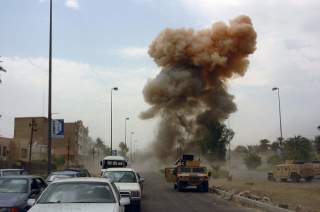 Second, ISIS’s extreme violence has allowed it to successfully outbid Al-Qaeda and attract more recruits, so that the former affiliate is now the center of the global jihadist movement. ISIS is strong enough to conquer and hold major population centers in Iraq and Syria. The group’s extreme ideology makes it anathema to many governments, but new research demonstrates that territorial control is the most important factor in causing a state to negotiate with a non-state actor, regardless of its ideology.

Third, ISIS’s attempts to kill free speech and less extreme interpretations of Islam will undoubtedly lose in a broader war of ideas due to the wide-scale rejection of the content by those inside and outside of the Middle East. However, the prominence and territorial control the group has gained via terrorist violence will allow it to spread its ideology to a not-insignificant minority, especially if ISIS opponents respond with indiscriminate repression and/or ineffective governance. Furthermore, the fact that ideas are not easily killed via violence against committed adversaries also means that U.S. attempts to kill jihadi ideas via the decapitation of ISIS leaders are also likely to fail.

Understanding the Effectiveness of Terrorism: Nuance Over Bumper Stickers

Maximal strategic goals are not the main focus of terrorist groups, so why should they be the overwhelming focus of academics and policymakers seeking to understand these organizations? Even if an extreme “caliphate” does not endure, a polarized population wracked by ethnic cleansing, violence, and hatred is certainly not “success” for the enemies of ISIS in the Middle East and beyond. Furthermore, such developments set the stage for years of state failure, regardless of who rules them.

Claims like “terrorism works” or “terrorism does not work” may make for pithy headlines, but they obscure a far more nuanced reality. Academics, policymakers, and the general public need to take that nuance far more seriously if they are to understand and prevent terrorism in the future.

Peter Krause is Assistant Professor in the Department of Political Science at Boston College and a Research Fellow at Harvard Kennedy School’s Belfer Center for Science and International Affairs.

Craig Noyes is a recent graduate of Boston College.