G-20: It’s ‘Now or Never’ in the ‘Fight of the Century’ Between Donald Trump and Xi Jinping 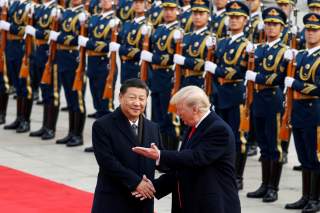 Larry Kudlow announced on Tuesday that President Trump believes there is a “good possibility” he will reach a trade deal when he meets with Chinese ruler Xi Jinping at the conclusion of the G-20 meeting in Buenos Aires.

The director of the National Economic Council also revealed that the administration is talking with China in a comprehensive fashion. “We’re having now a lot of communication with the Chinese government at all levels,” Kudlow said. “We were at a total standstill. Nothing was going on.”

The “trade war” is the “fight of the century,” and many think a deal to end it is “now or never.”

In the now-or-never camp are Yan Se, an associate professor at Peking University’s Guanghua School of Management, and Pearson Goodman, a graduate economics student at Peking University. “We are currently in the midst of a golden window of opportunity to end the ongoing U.S.-China trade war,” they wrote on the widely followed Caixin site Tuesday. “A visible shift in rhetoric and policy by Chinese General Secretary Xi Jinping and other high-ranking party officials provide evidence that China is willing to make meaningful and sincere reforms. Under this liberalizing momentum, China and the U.S. are in better positions than ever to reach a deal that would work for both sides.”

They are undoubtedly over optimistic about Xi willing to make meaningful concessions. He has, after all, roiled the leadership and cannot back down without painful personal consequences, but Yan and Goodman nonetheless look correct when they argue that there is only a one-month window of opportunity to avoid a breakdown in trade relationships. Their argument is based upon the effect of American tariffs on Chinese employment.

Up until now, Trump has imposed “Section 301” tariffs on $250 billion of Chinese goods. To date, there have been no noticeable layoffs in China as a result of these additional charges.

Yet on January 1 America’s tariffs on $200 billion of Chinese goods, imposed in September at a 10 percent rate, are scheduled to jump to 25 percent. Also Trump has threatened to put tariffs on another $267 billion of imports.

Yan and Goodman point out that the last batch of American tariffs would hit “low-profit but high-employment fields” and would have a “devastating” effect on the Chinese workforce, perhaps causing “a major shift in sentiment.”

“Massive unemployment” would change Chinese perceptions of the dispute from a disagreement “between two governments” to that of “between the Chinese and American people.” New tariffs, they predict, “could cause irreparable damage to the bilateral relationship.”

So should Trump come to terms with Xi to prevent an irrevocable break? “It’s crucial that President Trump recognize that his top priority in America’s trade and tech conflict with China is not cutting a deal, and especially not achieving an agreement to meet an artificial deadline,” Alan Tonelson told the National Interest. Tonelson is a trade expert based in Washington, DC.

Trump’s top priority should be the welfare of American workers, a group that has been neglected by his three immediate predecessors.

And now Trump has an opportunity, at his G-20 sit-down with Xi, to put their interests before those of their Chinese counterparts. It appears that manufacturers will be taking their cue from the results of the dinner that the two leaders will have on Saturday.

“Manufacturers and retailers are watching,” Jonathan Bass, the CEO of PTM Images, said on Monday. “If Trump announces an agreement with Xi or even indicates he will come to one soon, they will keep their factories and production in China. On the other hand, if they think Trump will not cave, and no agreement is likely, they will begin to move production out of the country.”

In the no-deal scenario, Bass, who manufactures home furnishings and décor items, believes that the unpredictability of the situation would drive retailers to “immediately pivot sourcing” and thus make the U.S. competitive again, even for low-cost goods.

The leave-China mentality affects more than just low-cost manufacturers. “There’s a real concern that Western corporates in Asia will be forced to move supply chains, hurting employment in Hong Kong and China,” Andrew Collier of Orient Capital Research told the National Interest this week. As Collier, based in Hong Kong notes, “The American Chamber of Commerce in Shanghai said 30 percent of its members are expecting this.”

Trump, by standing firm in Argentina this weekend, can accelerate the trend of disengagement of the American and Chinese companies. Yet it is not only the American president who is pushing factories out of China. Xi Jinping is also helping the cause of disengagement by punishing American companies in China, turning Fortune 500 behemoths into potential hostages with thus an added reason to leave the country.

Many said that supply chains could not move out of China. That wisdom, which sounded reasonable a half decade ago, now looks questionable.

As Bass reminds us, business abhors uncertainty. The so-called trade war creates a lot of it.

Yet even if there is a deal Saturday, the uncertainty does not go away. China’s leadership, despite what Yan and Goodman imply, has not made a decision to make the changes that Washington and other capitals demand. So in all probability there will be future disruptions in the trade relationship as Beijing fails to honor commitments. Xi, ominously, has not kept commitments that went into the 100-Day Action Plan announced by Washington in April of last year.

Beijing, which took decades to earn the reputation as a reliable member of supply chains, is losing that status fast. Saturday’s Trump-Xi meeting could be the now-or-never moment for not only America’s economic engagement with China but also China’s role as the world’s factory floor.