The G-20 Should Focus on E-Commerce, Not the Trade War 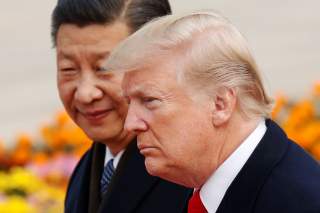 In the latest development of the U.S.-China trade war, President Donald Trump is threatening to slap new tariffs on goods from China if President Xi Jinping doesn’t show at the G-20 Summit in Japan later this month.

If a Trump-Xi side summit can be arranged, it could be a good thing. But restarting trade talks shouldn’t be the focus—or even the highlight—of events in Osaka.

Prospects for a breakthrough in relations between the world’s two largest economies are remote. Two years of meetings between Washington and Beijing have been fruitless, and even public statements remain general and broad.

Another sit-down between Trump and Xi may simply replay their meeting in Buenos Aires last year. A summit might well produce another general statement saying the two sides will restart negotiations (hopefully in good faith). Perhaps President Trump would decide to hold off on applying new tariffs to $300 billion worth of Chinese goods, so long as negotiations continue to be productive. He’s already indicated he’ll hold off until after the meeting in Osaka.

Whether negotiations can continue to be productive, however, is a whole other question.

Luckily, there is much more to talk about at the G-20 than Washington and Beijing’s disputes. Additionally, it is fair to assume that Japanese Prime Minister Shinzo Abe will do his utmost to make sure that some ground is covered.

Abe has every interest in not allowing the G-20 to be overshadowed by Trump-Xi side-talks. Not with his sun-setting political career. Not when this is Japan’s first hosting of the G-20 summit. Not when the Prime Minister hosted President Trump over the long Memorial Day weekend. And not with up-coming Upper House elections, and a possible snap-election, in Japan.

Abe has already set the stage for this G-20. During his speech at the World Economic Forum in Davos, Switzerland, he stated, “I would like Osaka G-20 to be long remembered as the summit that started world-wide data governance.”

And that is exactly what should be focused on during this G-20 summit.

Back in January, Abe announced his initiative for “Data Free Flow with Trust” (DFFT) – given the importance data plays for the development of modern industries and economies.

For consumers, e-commerce is just as important as the phones that enable us to participate in the digital economy. For businesses, it means more production with greater efficiency.

For America alone, the digital economy makes up almost 7 percent of U.S. GDP. That’s more than double the amount that trade with China accounts for America’s GDP.

Moreover, as Abe noted back in January, “The engine for growth, if you think about it, is fueled no longer by gasoline, but more and more by digital data.” It is important a Trump-Xi meeting should not get in the way of making progress on what is already a global effort to liberalize e-commerce.

Already, members of the World Trade Organization have begun talks to establish rules for this burgeoning area as e-commerce has become a much-needed addition to modern trade agreements. After all, both the U.S.-Canada-Mexico Agreement and the Comprehensive and Progressive Agreement for Trans-Pacific Partnership included agreements on e-commerce.

It would be easy for Abe to build, and expand, a coalition of like-minded countries starting with those members in the G-20, around existing rules on e-commerce. Easy candidates include the United States, South Korea, and Brazil.

Some G-20 members, the China, Russia, India, and Turkey, will make e-commerce negotiations difficult, whether it’s at the G-20 or the World Trade Organization.

Beyond the G-20, however, this coalition can expand to include other economies, like Taiwan, that are being left out of regional trade deals.

U.S.-China relations are pretty unstable right now. Unfortunately, it’s unlikely their relationship will improve much before America enters into its next presidential election cycle.

There can be a Trump-Xi summit, but tensions will remain. A summit could restart U.S.-China negotiations, which would be good. However, such a restart shouldn’t be the focus, or even highlight, of the G-20 Osaka summit.

Americans shouldn’t let progress that can be made on securing the future of U.S. commercial interests be overshadowed by a meeting between Trump and Xi.

Riley Walters is a policy analyst specializing in economics and technology in The Heritage Foundation’s Asian Studies Center.