Game of Groans: The Defense Department Loses Another Defense Secretary 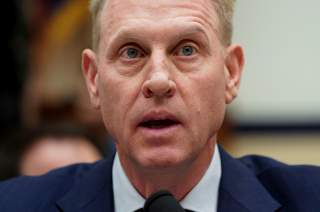 Four days ago, Patrick Shanahan participated in his only Beltway story. The exclusive report from Politico was a profile of sorts, a chance for the acting secretary of defense to make the case for why he is the right man for the job and why he should be confirmed.

We learned quite a lot from the story. Shanahan, for instance, was someone who likely didn’t expect the role when he first agreed to take the position of deputy secretary in 2017. All of that changed when James Mattis resigned last December, and he was thrust in as a replacement. Shanahan was in many ways learning on the job.

Like all cabinet members, politicians, and officials who call Washington home, the defense industry executive had his supporters and detractors. Shanahan’s critics called him superficial and uninterested in policy details, while his allies credited him with becoming an active proponent for the Pentagon on Capitol Hill. He was no Mattis, of course, but he wasn’t a placeholder either. President Donald Trump, in fact, nominated him for the position over other candidates.

And then, it was over.  Like a flash-bang grenade that overwhelms an enemy’s senses, Trump tweeted that Shanahan was withdrawing from the confirmation process. Only later did we learn that he was cooperating with a Washington Post investigation into a domestic abuse incident that occurred over a decade ago in which his son physically beat Shanahan’s ex-wife. Shanahan knew the story would eventually be published and understood it would further delay the Senate advise-and-consent timeline. So, he decided to take his hat out of the ring and resign immediately.

Lest anyone question whether Trump asked for Shanahan’s resignation, the president denied it outright on his way to Florida for the first formal rally of his re-election campaign. “I had heard about it yesterday for the first time,” Trump told reporters when asked about the family dispute. “I didn’t know about it. I heard about it yesterday. It’s very unfortunate, very unfortunate.”

Shanahan was a bit of a mystery to those on the outside. Known as “Mr. Fix-It” at Boeing, where he climbed the hierarchy during a three-decade career, Shanahan didn’t have military or government experience under his belt like many of his predecessors. Unlike former secretaries of defense, like George Marshall, Casper Weinberger, Donald Rumsfeld, Dick Cheney, Leon Panetta, and his old boss, James Mattis, Shanahan didn’t possess the lengthy resume one would expect a defense secretary to have. He wasn’t a long-time staffer in the Pentagon bureaucracy, a proven Washington operator, or a public servant of any kind. While he certainly had experience dealing with the Pentagon brass and Congress during his time as the head of one of the world’s largest defense contractors, Shanahan wasn’t a policy guy; he was a business guy.

That may have been why Trump liked him.

Until he didn’t. Trump has a habit of getting bored, angry, or sick of his staffers. Rex Tillerson, Mattis, Reince Priebus, Steve Bannon, and Sean Spicer have all been in the president’s good-graces until had a falling out with the boss. Others, like H. R. McMaster and Kirstjen Nielsen, never really got on Trump’s good-side at all. Pat Shanahan was in the first camp; NBC reported on June 11 that Trump was polling his friends and associates about his acting Pentagon chief, wondering whether there was a better candidate. There was a pretty good chance that even if Shanahan stuck around and got confirmed, he would eventually be fired, forced out, or browbeaten by the president.

The question now is what happens next. Mark Esper, the secretary of the Army, will be moved into the role of acting secretary of defense. At a time when additional U.S. forces are being deployed to the Persian Gulf and Washington and Tehran are taunting each other, it would be comforting to have a secretary of defense that is actually confirmed—or more importantly, one who will serve as a guard rail to the administration’s more hawkish advisers on the National Security Council and on the seventh floor of the State Department.

In Trump’s Washington, however, we don’t get much comfort or normality. Instead, we will get more confirmation hearings, more salacious accounts, more gossip, and more questions.