A Game of Russian Roulette? The West's Dangerous Sanctions Play against Russia 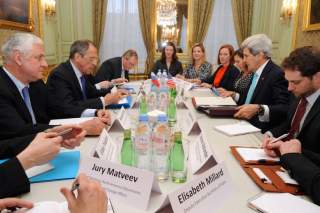 Current Western policy toward Russia, as it pertains to the Ukraine crisis, rests on several premises, each of them flawed.

The first is that President Vladimir Putin's progressive political isolation will persuade him to retreat and to settle the Ukraine crisis on terms favored by the West and the Ukrainian government.

The second is that Western economic sanctions will force Putin to change course and will hurt Russia but not Europe, or that they will hit Russia much harder. The bottom line is that the sanctions strategy assumes that Russia will cry "Uncle" first.

The third assumption underlying Western policy, and it is unstated because the official line of Washington and Brussels is that they support a political settlement, is that the Ukrainian army will soon overcome the insurgency by force of arms—that Kiev’s military is on a roll and that the trend will continue and culminate in a triumph.

There is no evidence whatsoever to support the first two premises—and the third deserves scrutiny because it is shaky.

Let’s start with the effects of international isolation.

There’s no denying that Putin has paid a political price, particularly in the West, and especially after the downing of MH17. But that downside hasn’t been accompanied by an erosion of popularity at home.

Indeed, so far, the crisis over Ukraine has improved Putin’s standing among Russians compared to last year, with over 80 percent opining this summer that he is doing a good job as president.

It may be hard to discern what Russians “really” think about what their government is up to in Ukraine, and it’s a safe bet that not a few of them are worried about how the sanctions will affect their personal budgets and even about the risks of war.

But Putin doesn’t face the pressure of public opinion in the way that European governments do; and if the hope among Western governments is that mass dissatisfaction might spark street protests that force the Kremlin to rethink its policies in Ukraine, it’s almost certainly misplaced.

Moreover, it’s a mistake to assume that Putin’s pronouncements on Ukraine and his defiant attitude toward sanctions are divorced from the sentiments of most Russian citizens.

For now, anyway, the standard rally-around-the-flag effect is what sanctions and ostracism have produced among Russians. Besides, so significant is Ukraine to Russia—and in multiple ways—that Putin may be prepared to pay a bigger price for defending Russian interests there, as he sees them, than is the West.

It’s inconceivable that he annexed Crimea and still supports the Donbas separatists without having factored in the probability of sanctions, which, diplomatic demarches aside, are the only realistic means the West has available.

If we know one thing about crises, it’s that they are not shaped by the calculations of accountants. Honor, prestige and hubris—all emotions not easily factored into equations and hence predictions, but no less real for that—take center stage; and there proves to be a lot of ruin in countries.

Now to the effects of economic punishment.

Far from having induced Putin to back off, they have prompted him to up the ante by slapping sanctions of his own on the EU, specifically on agriculture and food products, the exports of which netted EU economies nearly $16 billion last year. That’s not a colossal sum perhaps but it’s enough to pinch particular sectors and particular countries, such as Poland, Germany and the Netherlands, among the top EU food suppliers to Russia.

Thus sanctions have become a two-way street. And the cost to the EU will exceed the cost to the United States, which shipped only $1.6 billion worth of food items to Russia last year, about 4 percent of all such American exports.

The average unemployment rate in the Eurozone economies is 11.6 percent. In ten EU countries, it exceeds 10 percent, and in five (Spain, Croatia, Cyprus, Portugal, and Slovakia) over 14 percent. That’s compared to 6.2 percent in the United States at the end of last month.

So far, there’s solid support in Europe for sanctions; but it’s early yet. Sanctions were backed by 70 percent of Germans in a recent poll—but the number fell to 49 percent when the question turned to what the attitude would be in the event that there were economic costs to Germany.

If this is the level of endurance in Europe’s strongest economy even before there has been any real pain, what’s it likely to be in those EU countries that are still in the economic doldrums?

Western sanctions on Russia—especially those that affect its access to credit and technologies for key economic sectors such as energy—will be painful. There’s no question about that, not least because Russia’s economic growth rate has slowed to a crawl—0.8 percent in the second quarter of this year.

But the relevant questions are: how much will they bite, how soon and with what consequences for the Kremlin’s conduct in Ukraine?

The answer is that we don’t know.

What we do know is that Russia has the means to reduce the adverse effects. It has $478 billion in reserves, the fifth largest in the world. This gives the Russian central bank the means to help companies pinched by the credit squeeze created by sanctions. Not an ideal solution, but better than none.

Moreover, Russia’s external debt is $721 billion. That’s not a trivial amount, but in relation to Russia’s GDP, was 33 percent at the end of last year. The corresponding figure for the United States was 97.9 percent, for Ukraine 78.8 percent. In global rankings on this metric, Russia fares very well.

Then of course there’s the revenue Russia can count on from energy and gas exports, likely $362 billion this year.

The upshot is that policy makers banking on sanctions to force Russia to yield in Ukraine may be in for a long wait.

And time matters, because Russia can inflict even more economic pain on Ukraine than it has, leaving the West to pick up the tab. Ukraine’s economy is already in bad shape, and the war is making matters worse. Total output is expected to shrink by 8 percent this year and the budget deficit—not counting money owed Russia for gas imports—is on course to top 12 percent of GDP.

As for a military solution, while that can't be ruled out, it will prove an even more bloody and destructive process than it has been already and will make political reconciliation in Ukraine much harder.

Kiev’s forces are indeed closing in on Donetsk, but taking a city with a population of one million may prove a long and bloody affair, especially if Russia ramps up aid to the insurgents.

The conflict has already claimed 1,500 lives, and the UNHCR estimates that as of early August 117,000 Ukrainian citizens have been internally displaced and that another 168,000 have sought refuge in Russia.

It’s particularly important that people living in Ukraine’s war-torn eastern regions be able to vote unimpeded in the upcoming parliamentary elections—something that wasn’t possible in the presidential vote—so that the country’s emerging political institutions have legitimacy in the Donbas. Without that, Ukraine risks continued instability.

All of this of course assumes that Russia will necessarily allow the insurgents' defeat.

There is, then, no sanctions-cum-war solution at hand. What’s required is a political package that combines an internationally monitored ceasefire; mediated talks; agreements on Ukraine neutrality and on joint efforts to help its economic stabilization; and confidence-building measures that reduce the likelihood of war between Russia and Ukraine.

Russia has been seen as the problem in each of these areas—and with good reason. Putin bears much responsibility for this crisis. At the same time, it will not end, and indeed may get worse, unless we rethink our present strategy and figure out how to make Russia part of the solution, without its being able to define all aspects of that solution.

Alas, in the current circumstances in the United States—certainly inside the DC beltway—any idea that falls short of ratcheting up pressure on Russia and coming across as tough brings on charges of appeasement.

Hence we are a long way from a political context in which proposals for a new approach are apt to gain acceptance. The question is how much worse things will have to get before they do.

That's the pity of it all.