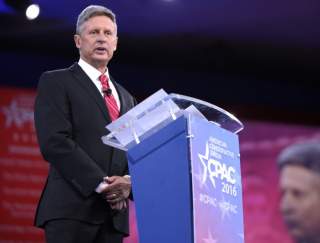 If we adopt and follow these basic principles, the politically sensitive idea of reducing military spending becomes realistic. We must balance the federal budget, and it is fallacy to believe we can do so without being smarter and more focused in our military spending. The Defense Base Closure and Realignment Commission has regularly concluded that we have excess capacity in military bases of more than 20 percent. We have tens of thousands of troops stationed in places like Japan and Europe—for what purpose? We have weapons systems the military doesn’t even want, and yes, we are subsidizing the national defense of too many other nations with our own troops, equipment and deployments.

With defined missions, a focus on defense rather than intervention, regime change and nation-building, we can gain significant military savings while, in fact, better securing our safety here at home.

I often say we must “rule the world with diplomacy and free trade.” That isn’t just a slogan. What is missing from our foreign policy is the idea that we must operate from a position of economic and, therefore, diplomatic strength. Right now, we are wringing our hands because Russia and China are imposing their wills across the globe, and we appear powerless to influence their decisions or ambitions.

That would not be the case if those nations—and others—had no choice but to be concerned about the economic and diplomatic ramifications of their actions. Conversely, our strongest and most valuable alliances are not with nations who are dependent upon our military, but rather with those nations who are dependent upon our goods, services, markets and trade.

We are foolish if we believe that we can continue to be the world’s premier superpower if we do not put our financial house in order. The Soviet Union ultimately crumbled because it bankrupted itself with flawed economic policies and overextensions of its military. No one conquered them; they crumbled from within.

Likewise, it is absurd to believe, in a global economy, that we can somehow restore our economic strength and competitiveness by building walls, both physical and financial, between ourselves and competitors—as some would have us do.

Show me an America with less debt, greater economic strength, and robust trade relationships across the globe, and I will show you a safer, more secure, America.

Finally, we cannot talk about foreign policy and national defense without discussing ISIS and other extremists who have done us harm, and will do so again. Terrorism and the threat from extremists are real. But our approach to those threats must be real as well.

The notion that we will someday celebrate V-I Day, Victory over ISIS, is both naive and misleading. It won’t happen. What must, and I believe, will, happen is that we focus our resources on isolating the extremists, containing them, and starving them of the funds and support they must have to mount large-scale attacks. Tens of thousands of boots on the ground won’t do it. Dropping bombs on the other side of the globe won’t do it. And pretending that some military-style Global War on Terror will bring about a clear victory is not realistic.

Protecting American lives, freedom and property from extremists here and abroad will be a continuing process combining law enforcement, gaining greater cooperation from other nations, military action where clearly appropriate and effective, and many other efforts.

We may never know if and when we have won a “War on Terror.” It simply isn’t that kind of threat, and we need to deal with that reality. And we certainly won’t win that war with a foreign policy that continues to contribute to chaos and vacuums of power across the globe.

Gov. Gary Johnson (@GovGaryJohnson), the former two-term Governor of New Mexico, is the Libertarian Party nominee for president. His running mate is Bill Weld, the former Governor of Massachusetts. Learn more at http://JohnsonWeld.com.