Genocide and Democracy in Burma 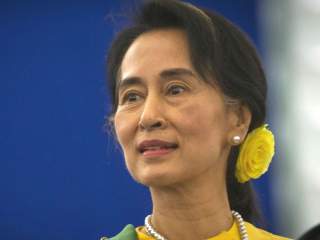 SOUTHEAST ASIA is a miracle of modernization. In the course of a few generations, the region has experienced startling change. Singapore makes parts of the United States look like the Third World; you can barely turn around in Thailand without bumping into a convenience store or a car-parts factory. Malaysia, too, has raised living standards dramatically. Over the past fifteen years, even former laggards like Vietnam and Cambodia have managed to get into the act.

There has been one particularly glaring exception to this pattern of growing prosperity: Burma (also known as Myanmar). For most of the past half-century, the country of fifty million people has been sinking steadily deeper into poverty and stagnation. The generals who seized power in 1962 took what had been one of the region’s engines of growth and drove it into the ground.

If anyone dared to complain, the junta threw them into jail—and when the jails grew full, they filled them again. In 1988, with a ruthlessness that presaged Tiananmen Square a year later, the generals slaughtered thousands of protesters who had taken to the streets to challenge their rule. A grudgingly granted election followed—and when it was won, predictably, by the prodemocracy opposition, led by a charismatic young political novice named Aung San Suu Kyi, the generals annulled the result and threw still more of their foes into prison. The leaders of an entire generation spent decades of their lives behind bars.

And then, in 2011, to widespread astonishment, the new president—an ex-general and junta alumnus named Thein Sein—embarked on an unexpected opening. Aung San Suu Kyi, having spent much of her adult life under house arrest, was suddenly released and encouraged to return to political life. Political prisoners emerged, blinking in the sunlight. The press found its voice again. Elections came, at first modestly, and then more elections, on a national scale.

Burma may be a faraway country about which we know little, but what happens there is of considerable import to the rest of the world. It is virtually guaranteed an outsized international role by its unique position between India and China. As Economist correspondent Richard Cockett reminds us in his wonderfully readable book Blood, Dreams, and Gold, during World War II Burma served as the main Allied supply route to Nationalist forces in the rear of China’s Japanese occupiers, thus assuming “enormous strategic importance in the existential struggle over the world’s most populous country.”

Today, Burma offers the Chinese a useful outlet to the sea for their western flank as well as a lucrative source of raw materials. Indeed, the old junta’s excessive closeness to Beijing may well have factored into the decision to embark on the current opening, since liberalization was a prerequisite for good relations with the United States and Europe. And Washington’s much-ballyhooed “pivot” from the Middle East to East Asia has refocused attention on this former backwater. But there are also other sound reasons for an interest in Burma. If a place like this can succeed in embracing the open society, that could be a big morale booster for the world, a welcome example of momentous but peaceful change at a moment when the democratic idea appears to be losing some of its luster.

I had the great privilege to be in Rangoon on November 8 as the citizens of the city took part in the first real national election most of them could remember. It was a tremendously moving experience. Here were people who had long been denied even the thinnest whisper of a voice and now, given the chance to state their preferences, they were damned well going to use it. Most chose to do so by casting their votes for Aung San Suu Kyi’s prodemocracy opposition, the long-suffering National League for Democracy (NLD). To no one’s real surprise, they handed the party an overwhelming election victory that has now put it in the position to form the next government. Economically, as well, the country is on something of a roll. The mere act of revoking the old policies of isolation has provided a notable boost. Growth is robust, and many Burmese suddenly find themselves with access to a whole host of modern services and conveniences (like mobile Internet or ATMs) that were all but unknown just three or four years ago (even if they remain out of the reach of many in a place that is still among the poorest in Asia).

GIVEN THIS positive story line, then, Azeem Ibrahim’s book, The Rohingyas: Inside Myanmar’s Hidden Genocide, must come as something of a shock. How does the notion of a mass atrocity square with the image of a long-benighted country emerging from tyranny? The simple answer is that democracy and liberalism don’t necessarily go hand in hand—and, given the rocky history of its region, we shouldn’t expect Burma to be much different. Since the country first achieved independence in 1948, its leaders have struggled to reconcile viable state institutions with its extraordinary ethnic diversity and a culture of intense religiosity. Civil war broke out almost immediately between the central government, dominated by the majority Buddhist Bamars, and restive minorities along the periphery.

That conflict has yet to subside. Perhaps the greatest challenge for Suu Kyi’s new government (which still faces major constraints on its power from the old military establishment) will be negotiating a new federal structure that can accommodate the ethnic groups’ demands for self-rule. As Cockett notes, “no country in the world, with the possible exception of India, has ever tried a federal system based purely on ethnicity.”

Much of this complexity is the natural result of Burma’s geography. Yet British colonialism added another layer to the mix. In the late 1940s, as Cockett relates, a British scholar by the name of John Furnivall drew a vivid portrait of the multiethnic society that the Raj had brought about. The British encouraged migration throughout the vast free-trading space of their empire, and Furnivall showed how the resulting subcultures of Rangoon—Hindus, Muslims, Armenians, Jews—leveraged their wide networks of contacts to form a sort of protoglobalization. Furnivall coined a term for this strikingly cosmopolitan culture: he called it “the plural society.”

As Cockett notes, most of us nowadays tend to regard pluralism as something inherently positive. But Furnivall wasn’t so sure. Like many of his contemporaries, he worried about the cohesion of a society built solely on commercial ties. For all their everyday mingling, these disparate cultures shared little in the way of common values. They were all too clearly the product of the rootless capitalist culture imposed on Burma by its imperial masters—the same ones later lampooned by George Orwell in his first novel, Burmese Days. Meanwhile, the Buddhist Bamar majority in the hinterland often found itself excluded from the benefits of the plural society and came to regard the relatively privileged immigrants that symbolized it—many of them Muslims from the Bengali-speaking parts of India—with pronounced ill will. As a result, the terminal postwar weakness of the ostensibly victorious British soon prompted Burmese nationalist leaders to launch a full-scale purge of the old commercial elites, who were soon emigrating in the millions, mostly to India. The generals who seized power in 1962 repeated the exercise. Both waves of expulsions devastated the economy, blows from which, in many respects, it has yet to recover.

ONE GROUP in particular has found itself bearing the brunt of this nativist backlash: the Rohingyas, the persecuted Muslim minority at the center of Ibrahim’s book. As he shows, some of the Rohingyas trace their roots in the western state of Arakan well back to the precolonial period. The majority, though, were brought over by the British. The Buddhist Arakanese, themselves the remnants of an independent kingdom that was subjugated by the Burmese in the not-too-distant past, soon found that the newcomers, vulnerable and impoverished, made wonderful scapegoats for their own frustration. The military junta, like so many authoritarian leaders before them, soon figured out that the Rohingyas made perfect punching bags when the occasion demanded it. Tapping into a long-standing strain of Burmese xenophobia, they began undermining Rohingya claims to citizenship, proclaiming them to be “illegal immigrants” from India or Bangladesh, even in cases where families could show that they’d been living in the country for generations.

Indeed, today’s Burmese nationalists vehemently reject the very label “Rohingya,” which they dismiss as an artificial label for people who should simply be called “Bengalis.” The Burmese government has even stated that it has no record of the Rohingya among the “indigenous ethnic groups” of the country, even though the word is attested by many textbooks and works of history. This might sound trivial, but history has repeatedly shown that denying a group’s name often goes along with denying its existence. In 2012, just as the government began moving ahead with its cautious liberalization, a violent sectarian conflict broke out between the Buddhist Arakanese and their Muslim neighbors. Dozens of people were killed. The government reacted by dispatching many Rohingyas to camps, where they are now held in conditions of utmost squalor, with little access to food, medicine or education. Many of them, long denied official citizenship, have now been stripped of their voting rights as well. On the face of things, it is hard to dispute Ibrahim’s conclusion—one he shares by now with several prominent international organizations—that Burma “stands on the edge of genocide.”