The Geopolitical Cost of Battling the Coronavirus Separately (China Will Win) 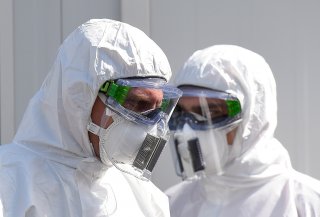 While the politics of foreign assistance are challenging, especially at a time of domestic crisis, the United States and Europe cannot afford to be outdone by the coronavirus diplomacy of China and other competitors. Europe has realized this and is moving forcefully to offset its early errors, whereas the United States continues to appear lethargic, self-absorbed, and disorganized. The United States must learn from Europe’s initial missteps and, to secure their shared interests, the United States and its European allies should unite their global coronavirus efforts into a single, closely coordinated, and mutually reinforcing transatlantic campaign.

Even though the European Union (EU) is struggling to manage the coronavirus crisis internally, its activities to assist other countries around the world have become increasingly effective. But it certainly didn’t start this way. Initially, the EU and its member states fixated on their own growing difficulties as coronavirus rapidly engulfed the continent, made a number of thoughtless errors that dented the EU’s external profile and influence.

In mid-March, Brussels issued what appeared to be an EU-wide prohibition regarding the export of certain medical equipment. Although Germany had in fact asked the European Commission to consider banning the export of personal protective equipment outside the bloc, the rule enacted was actually a requirement for member-states to explicitly authorize such exports to non-EU countries. But the damage was done, especially in the Western Balkans. These countries have a clear European perspective, meaning they will join the EU once they fulfill important reform criteria. Albanian prime minister Edi Rama responded to the measure by declaring “the EU cannot and should in no way exclude the Western Balkans from trade access for these essential goods for the health of our people.” His Serbian counterpart, Aleksandar Vucic, was even more pointed in his criticism, questioning whether European solidarity truly exists.

Perhaps Vucic’s frustration was expressed with the intention of turning heads in Brussels and EU capitals. It surely did. Whether his comments were a stimulant for EU action is hard to determine, but the EU quickly picked up its game in the Balkans soon thereafter. It has tapped into its Solidarity Fund and put together a package of €410 million in bilateral financial assistance to the countries of the Western Balkans, which includes €38 million in immediate assistance for medical and protective equipment and €374 million to help them recover economically once the quarantine ends. Brussels has paired this support with a robust public diplomacy campaign in traditional and on social media. EU ambassadors in the Western Balkans are meeting regularly with senior government officials and joining them at airports to welcome the arrival of supplies purchased or transported using EU funds, making sure numerous EU flags are on full display.

Moreover, European Commission officials and the leaders of the EU’s most influential member- states have been burning up the phone lines with direct calls to Balkan heads of state. EU foreign policy chief, Josep Borrell, has spoken with just about all of them. Austrian Chancellor Sebastian Kurz and EU Enlargement Commissioner Oliver Varhely hosted a videoconference with Western Balkan prime ministers, during which they emphasized “the EU’s readiness to support the region in addressing the coronavirus outbreak and its impact.” German Chancellor Angela Merkel and French President Emmanuel Macron have also placed calls to individual leaders.

The countries of the EU’s Eastern Partnership—Armenia, Azerbaijan, Belarus, Georgia, Moldova, and Ukraine—are now also receiving considerable attention from Brussels. Tracking with the structure of its financial assistance to the Western Balkans, the EU has allocated €140 million for the most immediate needs of these nations and is redirecting existing financial resources worth up to €700 million to help mitigate the economic fallout from the coronavirus crisis.

But the EU isn’t only providing assistance to countries in close proximity. In Africa, which could become the new global coronavirus hotspot, Brussels has announced a plan to dispense $3.8 billion in aid. According to Borrell, “Africa is a priority for the European Union, and we are very much aware it is under huge pressure, that the crisis could have consequences of an entirely different scale than in other parts of the world.” The EU is also earmarking $80 million for African coronavirus testing labs connected to the Gates Foundation. On a bilateral basis, France, which is the EU state with the greatest presence in Africa for reasons of history and culture, is providing nearly €1.2 billion in coronavirus support to the continent, mostly in the form of loans.

All of these activities are folded into what the EU has dubbed its “Team Europe” campaign to assist nations around the world in their fight against coronavirus. As part of the drive, Brussels is pooling resources from the EU, individual member-states, and joint financial institutions like the European Investment Bank and the European Bank for Reconstruction and Development to support countries in the Middle East & North Africa, parts of Asia and the Pacific, Latin America and the Caribbean. The funds available will be in the €20 billion range.

Ironically, the EU seems to be more organized in its efforts to provide external aid to countries around the world than reaching the necessary consensus to support its own member-states. The inverse is true with the United States. While Congress quickly came together to pass an economic stimulus package, the United States has been less active, visible, and effective than Europe in its policies to help other countries meet the challenges of coronavirus. Congress allocated a mere .05 percent of the $2.2 trillion stimulus package for the purposes of international assistance. The State Department and U.S. Agency of International Development have announced a total of $500 million to support international organizations on the front lines of the coronavirus pandemic.

But compare that to the figures earmarked by Europe. And as China has shown, it’s not just about money. President Xi Jinping and senior Chinese officials are personally engaged in outreach to world leaders. In a single day, Xi spoke with the leaders of France, German, Spain, and Serbia to offer coronavirus support. Moreover, Beijing is sending teams of doctors and medical specialists to various countries to provide technical assistance and advice. There has also been semi-official Chinese activity. In Ukraine, for example, Alibaba founder Jack Ma alone has donated $80 million in medical supplies compared to $1.2 million in U.S. aid.

The fact that Ma is outspending the United States nearly seventy-to-one in Ukraine matters. This is a country that is vital to the future of both Europe and Russia. The United States has critical national interests to protect in Ukraine. Already prior to the coronavirus pandemic, the Chinese were endeavoring to acquire parts of the Ukrainian defense industry, including one of the most advanced military aircraft engine manufacturers in the world, which Beijing could exploit to modernize its armed forces, undermining the national security interests of the United States and its allies in Asia.

Though Europe has been more effective in its coronavirus diplomacy relative to the United States, both have been outperformed by China. To be sure, there are countless reasons why Beijing was in a better position to assist other countries, especially as a result of its months-long coverup of coronavirus, which misled the entire world. Beijing had first-mover advantage. The coronavirus crisis arrived in Europe and the United States at virtually the same time and just as China was starting to recover. This reduced the need for medical supplies in China and allowed Beijing to sell and donate its excess stocks around the world.

Had the trendline instead continued to deteriorate inside China, Beijing surely would not have been as magnanimous in its global assistance. Moreover, having employed both effective and ineffective methods to manage the coronavirus crisis for months, China possessed—and still possesses—a unique experience and lessons-learned, giving Beijing the ability to deploy informed medical and quarantine experts around the world at little to no cost. These Chinese experts have been welcomed by local leaders, most of whom don’t care where such assistance is coming from at the moment, as long it helps them mitigate the consequences of coronavirus and bolsters the perception among their electorates that their governments are competing successfully to court external support against the disease. The adage that all politics is local, while always true, has been amplified countless times over by coronavirus.

But for the United States and EU, none of this alters reality. There are no asterixis when it comes to great-power politics. Rather than rely on the belief that the countries now expressing gratitude and lavishing praise on China for its aid will one day turn around and blame Beijing, recognizing that the Chinese coverup of coronavirus made it impossible for them to prepare adequately for the crisis, the United States and Europe must further improve their own global response.

First, the United States should adopt the policies and measures already undertaken by the EU and its member states. That means more money, more senior-level outreach, and a more active public diplomacy campaign to show societies around the world that the United States, as the wealthiest and most powerful country on the planet, can address the spread of coronavirus at home and provide robust support to others at the same time. President Donald Trump doesn’t need to call most world leaders, but someone from the United States must. It can be Trump, Secretary of State Mike Pompeo, National Security Advisor Robert O’Brien, Treasury Secretary Steve Mnuchin, Senate Majority Leader Mitch McConnell, House Speaker Nancy Pelosi, or any number of U.S. representatives on either side of the aisle. Regardless of who exactly makes the call, the message will be the same—the United States cares about the plight of your country, is providing assistance, and will continue to provide assistance until we defeat this common enemy together.