Geopolitical Fight Club: Why Iraq Must Square off with Saudi Arabia 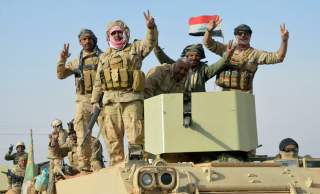 The defeat of ISIS has opened a new chapter for Iraq in the already dense and complicated geopolitical saga of the Middle East, providing an important opportunity to resolve sectarian tensions and rebuild Iraqi state and society once again. The abating of the extremist jihadi threat is a clear and momentous victory but also fraught with risks that could potentially lead to reversion of a bloody and protracted conflict. From the rapid reconquest of northern Iraq and strategic successes across the border in Syria, Shi’a armed groups directed and trained by the Iranians have proven to be effective boots on the ground in shaping the new geostrategic realities. These battles have pitted global Wahhabi jihadists against transnational Shi’a fighters in places like Syria and Iraq—representing the globalization of religious sectarianism in flashpoints across the Middle East.

These armed conflicts exacerbate challenges in a region already fraught with serious escalations of sectarian rhetoric and violence and highlight the importance of sectarian de-escalation in any fruitful move towards rebuilding Iraq as well and lowering regional tensions between Saudi Arabia, Iraq and Iran. The role of Iraq’s revered Grand Ayatollah Ali Sistani, who is highly influential in Iraqi politics, will be crucial in this peace-building process. Nevertheless, there is only so much that can be done as a moderating force unless serious progress can be made both towards interfaith dialogue between Sunnis and Shi’as and conflict resolution between Iran and Saudi Arabia in the broader regional context.

Iraq is a key piece to the regional sectarianism puzzle. It was the 2003 American toppling of Saddam Hussein, which brought to power the Arab world’s only Shi’a-led government and upended the sectarian political geography in the Middle East. Regionally, it disrupted the balance of power as Iraqi Shi’as assumed governance in an Arab world dominated by Sunni elites. It also enabled Iran and Iraq to forge close ties, which strengthened the Axis of Resistance and Iran’s geopolitical sway. These developments play into many Saudi concerns and narratives of a powerful Iran and a rising “Shi’a crescent.”

Domestically, within Iraq, a decade of ineffective and corrupt state-building plagued by an anti-American insurgency, destructive Sunni-Shi’a tensions, and neglect towards Sunnis, lower-class Shi’a, and other marginal groups hallowed out the Iraqi state. The success of ISIS was in part enabled by a weak Iraqi state. The Iraqi army effectively melted away in the face of two thousand ISIS insurgents advancing on Mosul in 2014, and radicalization among Iraqi Sunnis created a degree of sympathy for the cause of ISIS initially.

The victory over ISIS in Iraq however has created its own unique dilemmas for combating sectarianism. At the onset of ISIS’s expansion, a decisive fatwa by Iraq’s highest Shi’a authority radically changed the equation on the ground. Ayatollah Sistani’s fatwa mobilized the faithful to arms, contributed to the rise of the “Popular Mobilization Forces” (PMF), and brought more volunteers to fight against ISIS that could be absorbed. Since then, hundreds of thousands of Iraqis—including tens of thousands of Sunnis, Christians and Yazidis—have trained and served with the PMF, demonstrating the highly effective mobilizing power of the Shi’a clerical hierarchy (the Marja’iyya). While Sistani’s fatwa undoubtedly helped bolster the PMF, he has always framed his language as legitimating Iraqi state-security forces and explains Sistani’s conservative and balanced attitude towards the PMF. Despite this, the PMF is an umbrella organization and different factions within it operate quite autonomously even though it is officially a part of Iraqi government security forces.

The PMF’s particular configuration as a popular mobilization project who fight in the name of the Shi’a clergy and are formally integrated into the state renders it as a unique political force. The most immediate implication of this is that Iraq’s system has new powerful actors that will upend political calculations and the balance of power within the country. The PMF announced an electoral coalition to compete in upcoming May elections and will likely do well in the polls. Although the PMF is not technically allowed to run in elections, candidates and politicians affiliated with the movement—such as Hadi al-Amiri who resigned from his PMF post to run—are clearly identifiable through their public affiliations and political platforms. The PMF’s strategy thus seems to be to establish a strong presence in the parliament and to position themselves as a legitimate political force with a voice in government while maintaining their military wing. It remains to be seen whether they have the ability to govern as well as they fought on the battlefield and what, if any, ramifications this will have on the military nature of the organization.

An open question is what impact the PMF’s postwar policies will have on sectarian dynamics within Iraq. While the reintegration of PMF forces and combatants within the state is crucial for the internal stability of Iraq, the participation of PMF commanders in elections does create unease among many quarters, especially Sunnis, over how security forces’ involvement in elections will change Iraqi politics. Ayatollah Sistani and the clerical hierarchy in Najaf, however, could play an important balancing role to mediate the PMF, push for the inclusion of Sunni and other marginalized voices, and mitigate the associated influence of Iran in Iraqi politics. However, for Iraq’s Shi’a clergy to act as a moderate force, much will also depend on the direction of regional geopolitics and larger inter-state relations in the Middle East outside of Iraq.

While there has recently been a limited Saudi-Iraq thaw in relations with recent bilateral visits and the opening of the Saudi Embassy in Iraq, there are serious structural constraints to any meaningful long-term relations between the two states. Importantly, the exacerbation of the already fraught Iran-Saudi rivalry and the entrenchment of sectarian discourse in the region will only push Iraq more towards Iran and make mainstream Iraqi Shi’as distrustful of Saudi Arabia. Most Iraqis link the Muslim terror groups that sparked the recent conflict in the country back to the Wahhabi beliefs shared between Saudi Arabia and ISIS that formally excommunicated Shi’as as infidels and do not consider them to be Muslim. The shock execution of Saudi’s leading Shi’a authority, Ayatollah Nimr al-Nimr in 2016, its war in Yemen, support for the violent repression in Bahrain, as well as long-standing discriminatory Saudi actions against its own minority Shi’a population have created a toxic image of the country on the Shi’a street. Of course, the Shi’a clerical establishment in Iraq and Iran—whose authority transcends national boundaries—see Wahhabism as a serious threat and act as an institutional bulwark against it.

Consequently, high mistrust of Saudi Arabia by Iraqi Shi’as hampers any meaningful outreach they are undertaking toward the country, and any policy of balancing Iraq and Iran will not succeed unless serious steps toward sectarian de-escalation is taken in the region. In order to bridge the gap, there needs to be broad religious dialogue to discuss the role of Shia’s and Sunnis in the region and forge a common space for the inclusion of both denominations. Major Grand Ayatollahs—the highest authorities in the Shi’a world—have taken positive steps of forbidding the ritual cursing of certain companions of the Prophet Muhammad and the early caliphs considered reverential to the Sunni community. Moreover, Al-Azhar, the most prominent scholarly institution of the Sunni world, has recognized Shi’a (Jafari) law as the “fifth canonical school” of Islam and actively worked to create taghrib (“closeness”) among Islamic sects. Should Wahhabi Sunni scholars abandon their adherence to takfir (excommunication) and recognize Shi’as as real Muslims, a major step will be taken towards larger reconciliation which can lay the foundations for deeper intrafaith tolerance to take place.

In this endeavor the role of Ayatollah Sistani in Najaf will be crucial as he has a track record of promoting better relations between Shi’as and Sunnis and is an authoritative moderating figure who can reign in hardline elements in Iraq who might be opposed to a détente. Likewise, given the reforms Mohammad bin Salman is undertaking in Saudi Arabia, this may be an opportune time to push the religious establishment to reconcile with Shi’ism. But it still has to be seen whether MbS’s strategy for cultural liberalization domestically can go hand in hand with sectarian de-escalation regionally, or whether the push to liberalize is accompanied by an appeasement of Wahhabi hardliners to confront Shi’as and Iran regionally. The latter scenario will only exacerbate sectarian tensions and empower the ties that bind Iran and Iraq.

Payam Mohseni is the Iran project director at the Harvard Kennedy School for Government’s Belfer Center for Science and International Affairs.

Ammar Nakhjavani is an Iran project associate at the Harvard Kennedy School for Government’s Belfer Center for Science and International Affairs.