George F. Will: Back to the Neocons? 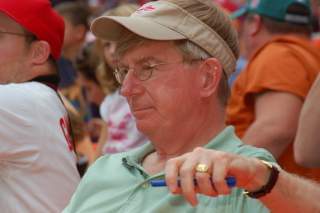 The death of William F. Buckley, Jr. in February 2008, besides depriving mainstream modern American conservatism of perhaps its most eloquent voice, also marked the departure of the Right’s most mercurial thinker. By the time the American conservative movement reached the half-century mark in 2005, Buckley, along with longtime National Review senior editor Jeffrey Hart , broke ranks with the movement they had founded and long given intellectual respectability, over the issue of the Iraq War. Both viewed it as a disaster, a fundamentally radical and therefore unconservative enterprise, one that had mired Washington in a war it should never have commenced in the first place.

Throughout his long career Buckley had taken stands that occasionally irritated some of his more doctrinaire followers. He successfully ostracized the John Birch Society in the early 1960s, against the advice of his publisher William Rusher. In his 1989 book Gratitude he called for compulsory national service; in the 1990’s he called for a halt to America’s insanely counterproductive ‘war on drugs’; and even as far back as 1965, during his campaign for mayor of New York City, he advocated environmentally friendly ideas like dedicated bicycle lanes and what is now widely known as congestion pricing.

While many on the Right felt that with Buckley’s passing the leadership of the conservative movement should and would pass to the bombastic Rush Limbaugh, Buckley’s true intellectual heir was of course none other than George F. Will. Will had started his career at NR, as it is known, where he attacked the Nixon administration for Watergate. His syndicated columns had long surpassed WFB’s in quality and impact, shared Buckley’s penchant for questioning some of the shibboleths of the populist Right and (like Buckley) had very much fallen out of favor in neoconservative circles over his criticism of the Iraq War, which he, too, saw as having more in common with the social engineering of Rousseau than the steadfastness of Burke. For infidelity to conservative doctrine, Buckley drew criticism from Norman Podhoretz and Will from both Commentary and the Weekly Standard.

Will had, up until Mr. Bush’s magnificently misconceived and ill-executed Iraq adventure, been a fairly reliable supporter of American military intervention abroad. But by 2006 Will had seemingly had enough. In his July 18, 2006 Washington Post column, Will said that the Weekly Standard was the “voice of a spectacularly misnamed radicalism, ‘neoconservatism’.” Warming to his theme, Will continued,  “One envies that publication's powers of prophecy but wishes it had exercised them on the nation's behalf before all of the surprises -- all of them unpleasant -- that Iraq has inflicted.” He concluded with a reminder: “Neoconservatives have much to learn, even from Buddy Bell, manager of the Kansas City Royals. After his team lost its 10th consecutive game in April, Bell said, "I never say it can't get worse." In their next game, the Royals extended their losing streak to 11 and in May lost 13 in a row.”

Then, in September of 2007, Will, dissented from the neocon and mainstream Republicans consensus which applauded President Bush’s “surge.” According to Will, this was bunk:

“Many of those who insist that the surge is a harbinger of U.S. victory in Iraq are making the same mistake they made in 1991 when they urged an advance on Baghdad, and in 2003 when they underestimated the challenge of building democracy there. The mistake is exaggerating the relevance of U.S. military power to achieve political progress in a society riven by ethnic and sectarian hatreds. America's military leaders, who are professional realists, do not make this mistake.”

In 2009 Will penned consecutive columns advocating the speedy withdrawal of American troops from both Iraq and Afghanistan. Earlier this year, in the wake of Liz Cheney’s withdrawal from the Wyoming Republican Senate primary, he appeared on Laura Ingraham’s radio program to say he wasn’t surprised by her departure from the race. In his words, “she is a neoconservative. So I think in that sense, again, she’s out of touch with the drift within the Republican Party."

Yet, recently, regular readers of his column may be forgiven for asking: what’s happened to Will? It seems that Will, like many of his compatriots at the Washington Post, has been suffering from a bad case of Russophobia, the kind acutely diagnosed by Paul Starobin in these pages. In March, around the time of Putin’s annexation of Crimea, Will, echoing the sentiments of Hillary Clinton, said that while Putin may not be Hitler, “he’s read Hitler’s playbook.”

In his syndicated column last week, Will seems to have revised his thinking somewhat. Readers were now informed that not only is Putin possessed of a “fascistic mind” whose “ethnic-cum-racial component makes it Hitlerian” but that he is actually “more dangerous than the Islamic State.”

Really? Does Putin, the head of a country whose economy is about the size of Italy’s, actually have the ability to challenge Hitler for the title of great dictator? The column is so bellicose, so overwrought, and so over-the-top that for a moment I thought I was reading the Weekly Standard. Not a chance. This was indeed Will, of late a scourge of neoconservative radicalism, now likening Putin’s annexation of Crimea with the Nazi invasion of Poland all the while warning against a Russian invasion of Estonia, Latvia, or Lithuania in the not-too-distant future.

Putin, according to Will, is both “more talented and dangerous than either Nikita Khrushchev or Leonid Brezhnev. Their truculence was not fueled by fury. Putin’s essence is anger.” Perhaps. But one wonders what emotion was fueling Khrushchev when, in 1956, he promised a delegation of Western ambassadors in Poland that “We will bury you!,” or what his state of mind was when he took off his shoe and began pounding a table at the United Nations in 1960. As for Putin being “more dangerous”: Khrushchev sent Soviet tanks into Budapest in 1956 and nuclear missiles to Cuba in 1962, while Brezhnev reversed Khrushchev’s efforts to come to terms with Stalin’s terror at home all the while crushing the Prague Spring in 1968 and orchestrating (or, more accurately, acquiescing in) the Soviet invasion of Afghanistan in 1979.

To counter Putin effectively requires more discrimination than simply indulging in the emotionally satisfying exercise of branding him a new Hitler. It requires statecraft and strategy. It requires a Kennanesque (or, to put it another way, realistic) sensibility that doesn’t seek so much to demonize the Kremlin as to carefully assess what its actual intentions are and how best to check them without resorting to rhetorical overkill. Alas, it seems that when it comes to Mr. Putin, Will and the neocons are reading from the same playbook. And our already low level of public discourse when it comes to Russia is all the worse for it.