The George Floyd Tragedy Is Part of a Bigger National Problem 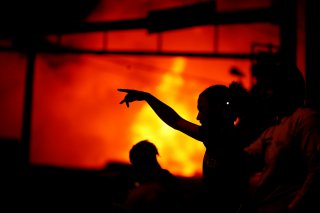 It quickly became clear as the United States emerged haltingly from coronavirus lockdown that the greatest pent up yearning of Americans (as measured imprecisely by mainstream media coverage and what attracts attention on social media) was for an opportunity to fight about race.  More specifically for the chance of some to hector others about how deeply and systematically racist America is. For more than two months, Americans have been at least partially distracted from this narrative by a deadly new contagious disease and the greatest economic collapse in ninety years. But at the first glimmer of an opportunity to change the subject, they – the mainstream media, virtually every progressive politician, and millions of social media followers could not wait to change the focus to something more divisive if not more important: the terrible racial guilt borne by all white Americans, the evil residing in the institutions they have constructed, the general rottenness of the country they (with others, of course) built.

The incidents which sparked this outpouring, one genuinely trivial, one grave but isolated, bear retelling. In New York’s Central Park, in an area known for its vegetational wildness and lack of clear sightlines, and thus long appealing to bird watchers and cruising gay men, a white woman in early middle age was asked by a black bird watcher in late middle age to leash her dog, as the regulations there call for. She made excuses why she didn’t want to, and he made an ambiguous comment “you’re not going to like what I’m going to do” and fished some dog treats out of his pocket.  She called the cops, claiming that an “African American man” was threatening her. One’s first reaction upon seeing the video (when she began talking, he began filming her on his phone) was the woman possessed none of the social radar owned by virtually all middle-class New Yorkers own as a kind of birthright: how to distinguish threat from non-threat. It is well known (if seldom mentioned publicly) that black males do commit crime at much higher rates than other demographics—a fact that Jesse Jackson famously lamented more than a generation ago, but approximately none of this crime is committed by bird watchers in their fifties. Her reaction was a gaffe, and honestly, her Upper West Side residence card should be suspended. Cops arrived to investigate the incident, concluding laconically “Upon arrival, police determined two individuals had engaged in a verbal dispute.”

Nonetheless, the birder’s video was on the internet, millions were mesmerized. The woman was successfully doxed, shortly thereafter fired from her job. The dog was taken from her. In three days since the encounter, the Times has published three op-eds drawing moral and historical lessons from the incident, it led the news on the BBC web page, and more might still be in the pipeline if a more serious racial event had not pushed it from the screens.

In Minneapolis on Tuesday morning, four cops were arresting George Floyd on suspicion of check-kiting; a bystander video showed him on the ground by a squad car, one cop with his knee on his neck as he protested he couldn’t breathe. He died in custody. Whatever sympathy one might generally have for police officers in fraught resisting arrest situations seemed irrelevant: the case seemed a clear instance of egregious, deadly misconduct. The cops were immediately fired, are being investigated prior to being charged by both local and national authorities. But the prompt response—in a city with a black police superintendent and a left-wing mayor, whose outrage was echoed by the tweets of President Donald Trump, did not head off the script which has come to be inevitable: police misconduct, or even the allegation of it, gives a license to loot and burn. Minneapolis-Saint Paul has experienced several nights of arson and looting, and further destruction seems highly possible. The police force seems hunkered down, fearful above all else of inflicting casualties. There have been sympathetic though less severe outbursts in Los Angeles (blocking freeways, attacking police cars) and Memphis. The mainstream press has, thus far, dignified these actions as “protests” though some are clearly criminal.

If several days ago I had been asked about the horrible video coming from Minneapolis, I would have thought about films which surfaced last summer—one showing a group of about a dozen blacks battering a solitary white man outside the baseball stadium in broad daylight, jumping on him, riding bikes over him, pausing only to do touchdown style celebration dances. Or footage taken from downtown, showing black perpetrators sucker-punching white victims before robbing them. These were not a national story but were intensely followed locally, and prompting a series of arrests, a spike in new police hiring and a public vows to better patrol Minneapolis’s downtown. There is a vast difference of course when agents of the state do wrong, it does something far more severe damage to the fabric of society. But last summer’s assaults are surely evidence that white middle-class Twin Cities of the Mary Tyler Moore era are a thing of the past, and that Minneapolis is approaching the level of racial tension and animosity long experienced by other cities in the upper Midwest.

The rule about race relations in America is that the only murders that count in political terms are transracial ones. As the Central Park episode was being relished by millions on Twitter, some noticed that the easing of coronavirus lockdown led to a spate of shootings in Chicago—thirty-nine victims over Memorial Day weekend alone. But the victims were presumably black, the shooters were black, there were no available points against whites to be scored. No one seems to believe more intensely than progressives themselves that black lives matter only to the degree that their difficulties can be clearly attributed to whites, so the Chicago carnage passed if not entirely unnoticed at least entirely unremarked upon by the national commentariat. Compared, at least to the attention given to the foolish “Karen” of Central Park.

People of a certain age, especially if they are New Yorkers, will remember we’ve lived through a period like this before. In New York in the late 1980s, every incident, every altercation between the police and uncooperative arrestees that went badly was heavily politicized. Crime was soaring. Black anti-cop activists captured a lot of favorable media attention; a dapper black machine politician was elected mayor primarily on the hope that his victory would calm the black community down. It was a kind of fever, broken eventually by several local episodes (including a black activist boycott of a Korean grocery store that came to be seen as bullying and racist), the Los Angeles riots, which demonstrated among other things that immigrants of color were willing to take up arms to protect their property against looters and arsonists, and the unambiguous readiness of mainstream Democratic politicians to say enough is enough. America entered a law and order period. New York and other American cities thrived, experienced a heyday of gentrification.

It is tempting to think that this period of racial animosity too will pass—that something will break the fever. But there is cause to be less optimistic. One is that the coronavirus has demonstrated that people can work from home—the city may have been nice for collegial networking, but technology has made it unnecessary. Those who can afford to—ie middle-class people of all races, may well find there is less and less reason to put their children at greater perceived risk by raising them in an American city. Secondly, there is substantial white radical component engaged in the current racial unrest, almost non-existent in the 1980’s anti-cop agitation, and apart from few white intellectual cheerleaders for the black revolution, in the 1960’s. Many young whites were engaged in the Minneapolis looting and arson—an acting out of the substantial radicalization that social scientists (especially Zach Goldberg) have observed taken place among left-wing whites since 2014 or so. It gives greater demographic heft to the radicals and means that middle-class people fearful of them are more likely to prefer flight than fight. Third, and probably most significantly at all, America is now a weaker and less prosperous country.  One could plausibly say to any American thirty or fifty years ago, play by the rules, get a simple working-class job, and you can probably provide a decent and safe life for your family. That clearly isn’t the case anymore.

So the idea that we can, to quote Rodney King - the black man whose beating by LAPD officers after a long car chase sparked the 1992 Los Angeles riot - “just all get along” seems far more remote than it did then.