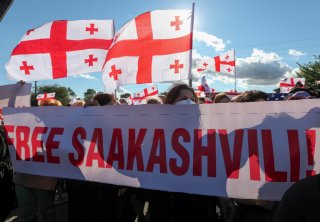 Another crucial Georgian run-off election is in the works, this time, not in the southern U.S. state, but the southern Caucasus country. Although the October 2 elections took place on the local level, they have had an outsized impact on the power struggle raging in Georgia between the ruling Georgian Dream Party and its political opponents. The leader of these opponents, former President Mikheil Saakashvili made a dramatic return from exile on the eve of the election. The country now awaits not only his trial but another round of heated run-off elections in four cities. How did an election of mayors and city council officials, who are among the least powerful in Europe, escalate into a referendum on the national government that experts warned could destabilize the entire country?

Last year, the 2020 parliamentary elections resulted in a Georgian Dream victory that the remaining eight opposition parties decried as fraudulent. Their subsequent decision to boycott parliament until new elections were held left Georgia effectively without a government from October until April 2021. An EU-brokered compromise, the Charles Michel Agreement, brought both the ruling and opposition factions (with the notable exception of Saakashvili’s United National Movement (UNM), the main opposition party) to the negotiating table and put a hold on, if not an end to, the political crisis. The agreement, among other things, required that Georgian Dream garner at least forty-three percent of the vote in the next round of local elections, which took place on October 2, 2021. Otherwise, the party would be required to hold snap parliamentary elections.

Georgian Dream has struggled to maintain its approval ratings amid a stagnating economy and a coronavirus outbreak “five times worse than India’s.” The party dropped out of the Charles Michel Agreement in July, (possibly from fears that it may not meet the forty-three percent threshold) to the chagrin of Washington and Brussels.

But Georgian Dream apparently need not have worried. The votes are in, with Georgian Dream weighing in at a safe, if not comfortable, 46.7 percent, followed by UNM at 30.7 percent, and the other seven parties splitting the remainder. Not even Saakashvili—who flew back to Georgia from Ukraine in order to mobilize voters against Georgian Dream—could kindle enough support to sway the results in his party’s favor. He arrived with a rallying cry for his supporters to take to the streets. Instead, he was arrested shortly after his arrival and faces a six-year prison sentence after having been tried in absentia in 2018 for abuse of power.

But not everyone is content to see Saakashvili serve time. Ukrainian president Volodymyr Zelensky has pledged to personally get Saakashvili back to Ukraine, where he was granted citizenship in 2015. In addition to the charges on which he was convicted, he awaits trial on several others related to the violent dispersal of a protest in 2007 and a raid on the television station of a political rival in 2008. For his part, Saakashvili claims the charges against him are politically motivated and has announced a hunger strike. White House spokesperson Ned Price has urged the Georgian authorities to ensure that Saakashvili receives fair treatment under the law, a remark that hints at the U.S. government's growing frustration with Georgia's democratic transition.

Critics of Georgian Dream, including those in the U.S. government, have accused the party of all manner of democratic backsliding, from covering up the death of slain journalist Lesko Lashkarava to vote-buying and intimidation in the lead-up to Saturday’s elections. Georgian authorities have invoked the ire of both Washington and Brussels, who condemned the government’s failures to uphold the rule of law and implement reforms, even going so far as to dangle the threat of sanctions. Adding to EU and U.S. “exasperation” was the leakage of Georgian Security Service files pointing to their surveillance of European and U.S. diplomatic missions in Tbilisi.

Despite its long-standing desire to join the EU and the fact that eighty-five percent of Georgians are in favor of a pro-Western foreign policy, the country now seems further from that goal than it has in decades. No amount of finger-wagging from Washington has made Georgian Dream change its course. Nor have financial incentives. Last month the Georgian government turned down a €75 million euro loan offered by the EU to help get Georgia’s raging coronavirus pandemic under control because it was unwilling to institute the judicial reforms upon which the loan was conditional. For now, it seems, all of the West’s entreaties to uphold are falling on deaf ears.

The true meaning of the October 2 elections is still unfolding. The country will now head into runoff elections to decide the mayors of the four biggest cities. Meanwhile, Saakashvili awaits his trial, the outcome of which will be a major test for Georgian institutions, particularly as the prospects for judicial reform are slim. Regardless, neither Saakashvili’s UNM nor Ivanishvili’s Georgian Dream have a clearly articulated vision for Georgia’s future. Rather than focus on the issues, the two parties have devoted their energies to undermining each other. If they continue, they will take Georgia’s once-lauded democratic institutions down with them.

Lillian Posner is the assistant managing editor at the National Interest.