Georgia's Aspiration: Living with, but Not in, Russia 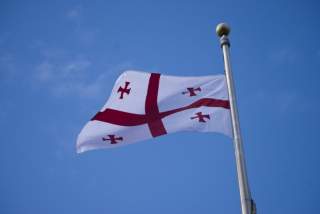 Georgia’s foreign and security policy is frequently talked about in “planetary terms.” For example, the statement that Georgia might enter “Russia’s orbit” like a “satellite” is a common expression; as a comet, Georgia is expected to follow a western trajectory. If so, Georgia—like a meteor—may find itself on “a collision course” with Moscow. In a recent article published by the Washington Post, the fear of entering Russia’s orbit was expressed. Speaking in cosmological terms, Georgia’s people, institutions and governments are expected to enthusiastically proclaim allegiance to the West and—with a single breath—denounce Russia.

Most recently, a National Democratic Institute opinion poll indicated that 26 percent of Georgians prefer the Eurasian Union over the EU. Out of context, there was one more “Russian orbit” interpretation, but this poll wonderfully captured the false choice that is being presented to Georgia from the outside. Georgia is not a celestial body. Grounded in the South Caucasus, Georgia has specific neighbors, political, economic, financial and military limitations. Thousands of Georgians receive remittances from Russia and trade in Russia. For generations, the mark of the elite was how “hallo” was pronounced when picking up the phone, which gave away how much time one had spent in Moscow.

Still, in May, the European Bank for Reconstruction and Development released its 2015 growth forecasts for Moldova, Georgia and Ukraine. The region very much suffers from Russia’s economic crisis, perhaps as much as the Finnish economy suffered in the early 1990s—and for similar reasons. Georgia’s growth projections halved: Our GDP is expected to grow by merely 2.3 percent this year. That is still better than Moldova, which is expected to see a 2-percent recession this year, not to mention Ukraine’s war economy. This is because Georgia’s economy (and society) is increasingly decoupled from its “post-Soviet” framework

Historically, it is simply wrong to assume that Georgia’s western choice is an anti-Russian statement. Georgia joined the Partnership for Peace (PfP) program in March 1994; Russia followed in June 1994. Russia signed a Partnership and Cooperation Agreement (PCA) with the EU in 1996; Russia had preceded Georgia signing a PCA agreement in June 1994. In sum, Georgia followed a course of institution-building, capacity-building, economic development, and in many respects, nation-building typical for a post-communist state. It is Russia that did not stay the course, not Georgia.

Furthermore, coming to an understanding with Moscow has been consistently sought in Tbilisi and confidently advised by the West. The Saakashvili government came to power in 2004 seeking an understanding with Russia; the Georgian Dream authorities came to power in 2012 with the similar hope of reinvigorating relations with Moscow. When the U.S. Secretary of State, Hillary Clinton presented Russian Foreign Minister Sergei Lavrov with a reset button in 2009, there were many among us who wanted to be a bridge in relations, rather than stand in the way.

To this day, NATO has not relinquished the 1997 NATO-Russia Founding Act, which forbids placing permanent bases in the Baltic States and Eastern Europe. Successive exercises ensure that at any one point in time, a sizable force is stationed in the region, but the West stays true to its commitment. NATO allies have been willing to heed Russia’s trauma, including Moscow’s security concerns in a region the Kremlin keeps calling the “Near Abroad.”

The term was initially benign, employed by Russia’s Foreign Minister Kozyrev, a man sincere in his intention to reach out to Europe. However, as early as 1993, I was warned by an advisor to President Vaclav Havel that once you recognize a “near abroad,” there may come a day you deal with notions of “middle” or “farther abroad.” This day has come. Georgia and Ukraine were invaded. Farther away, Montenegro is being considered for NATO membership. Nonetheless, an article published on Monday in the Wall Street Journal suggests that Russia is an inhibiting factor. Even farther abroad, Finland and Sweden see the violation of their airspace, territorial waters and cyberspace as a signal that their neutrality does not deter aggression. And Baltic States fear that Russia may be willing to test Article V.

Moscow’s “near-middle-farther-abroad” concept is tested in each NATO Summit, the next stop being Warsaw in July 2016. It is now clear that we need to move beyond the appeasement-deterrence pendulum. In considering what is the way forward, the status quo may be telling. Between article V “blanket security” and various “coalitions of the willing” tested in successive regional exercises collective security can be reimagined, restarted, assertively but not aggressively affirmed. The issue is not one “of principle” but of effect. Georgia never wished to scare or provoke Russia. Loudly attacking Russia at every turn may be good politics for some, but it is bad and dangerous policy for Georgia. We are near Russia, but not of Russia. We want to live with Russia but not in Russia.