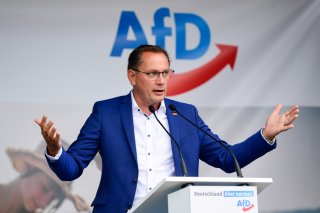 In many European countries, left-wing and right-wing populist movements have emerged that, despite all their differences, are united by their opposition to economic liberalism and capitalism. In some cases, right-wing populist parties began by promoting at least partially liberal economic policies, before transforming into anti-capitalist parties.

This is precisely what happened in Germany, where the AfD (Alternative für Deutschland) was initially founded in 2013 as a party with an economically liberal program. Gradually, however, pro-market economy members left the party in frustration, and the right-wing anti-capitalists increased their influence. This tendency is particularly strong in eastern Germany, where it feeds on the notion of “social patriotism” and thus wins over many voters who previously voted for the far-left Die Linke party (the latest incarnation of the SED, which formerly ruled East Germany and has changed its name several times in recent decades).

The anti-capitalist Right’s critique of capitalism and its economic policies differs only slightly from those of the Left. In his writings, Kaiser, the best-known pioneer of this movement, repeatedly quotes left-wing authors—from Karl Marx and Friedrich Engels to Thomas Piketty, Erich Fromm, and Theodor Adorno. The enemies, on the other hand, are “market radicals,” “neoliberals,” and “libertarians”—including Ludwig von Mises, Milton Friedmann, and Friedrich August von Hayek.

Are Left-Wingers and Big Business in Cahoots?

The core thesis of right-wing German anti-capitalists is that left-wing multicultural ideologists and big business are in cahoots. The real beneficiaries of mass immigration, they argue, are the capitalists, who benefit from access to a large reservoir of cheap labor. The left-wing ideologues who demand “open borders” are, so the argument goes, in fact pursuing a policy in the interests of capital: “It is not ‘the left that is driving mass migration, even if it approves for ideological reasons and acclaims it in the media. It is primarily driven by what was once called ‘big business’ in the form of industry and business federations.”

On this point in particular, however, questions remain: It is incomprehensible as to why mass immigration should be in the best interest of “big business.” Yes, “business” wants qualified specialists to move to Germany. But this is not only in the interest of companies but of society as a whole; it is not clear how demographic problems can realistically be overcome in any other way. But this immigration of qualified workers, which business leaders repeatedly call for, faces a lot of obstacles in Germany. There are countless bureaucratic hurdles for skilled workers, while immigration is comparatively much easier for those seeking to access social benefits—saying the word “asylum” at the border is all it takes. For this reason, mass immigration by people only looking to exploit the welfare system has been taking place in Germany for years, which is of course neither in the interest of “big business” nor workers—and is also something the majority of people in Germany do not want, as all surveys show.

In fact, mass immigration by people only looking to exploit the welfare system makes the necessary immigration of skilled workers even more difficult, because the resulting cultural problems reduce the acceptance of immigration across the population as a whole. As this example reveals, the thesis that left-wing multicultural ideologues and “big business” allegedly share the same goals is absurd because it makes no distinction between the type of immigration. There is no doubt that corporate leaders today often compliantly bend to the left-wing/green zeitgeist, but this is a sign of opportunism and not evidence that they are the real driving force behind the shift to the Left.

Kaiser approvingly quotes Axel Honneth, a theorist of the Frankfurt School, who raises the question “why mere ownership of the means of production should justify any claim at all to the returns on capital it generates.” Accordingly, parts of the economy should be nationalized. Götz Kubitschek, one of the masterminds of the anti-capitalist Right, believes that “the state should ensure the provision of basic services in the areas of transport, banking, communications, education, health, energy, housing, culture and security, and not just create a regulatory framework for private providers, who are primarily concerned with creaming off the most profitable sectors.” The task, according to Kubitschek, is therefore to “nationalize and simultaneously cut red tape”—although he does not seem to recognize that the more the state interferes in the economy, the more bureaucracy inevitably proliferates. Kaiser advocates considering the nationalization of all sectors of the economy that are crucial to the country’s development, e.g., heavy industry, chemicals and transportation. He also sees no justification for privately operated electricity plants and waterworks, etc. On the other hand, he generously concedes that light and consumer goods industries could remain “fields of activity for cooperative and private capitalist initiative.”

Marx, Engels, and Lenin, to whom the right-wing anti-capitalists also frequently refer, would have branded the ideology of the right-wing anti-capitalists as a petty-bourgeois reactionary criticism of capitalism. All large enterprises and corporations are regarded as problematic, while “consumer communities, cooperative village inns, which issue a dividend in the form of a community feast, and farms, which supply their small investors with free food (return on shares)” are idealized. East Germany has been selected as the testing ground for such anti-capitalist dreams. After all, Kaiser argues, surveys show that 75 percent of East Germans are in favor of a socialist system but believe it has never been correctly implemented.

Another idea: Following Otto Strasser, the leader of the “left-wing National Socialists,” Kaiser proposes the concept of a “hereditary fiefdom” that could replace private ownership. Accordingly, the state would remain the sole owner of land and means of production, leaving the management to the individual “according to ability and worthiness as a hereditary fiefdom.”

Social Policies Echo Those of the Left

In all other respects, these social policy proposals are closely aligned with those of Germany’s left-wing parties. The rich are to be burdened more in every respect, for example, by increasing income taxes on top earners and reintroducing the wealth tax, which has not been levied in Germany since 1996. The image of a “cherished and regulated social market economy” or “regulated social market economy of the twenty-first century” (Kaiser) actually has very little to do with a real market economy. The hope of the anti-capitalist Right is to bring together national and social elements in one movement, with a hatred of “the rich” common to both. Approvingly, Kaiser cites the demand of former U.S. secretary of labor Robert B. Reich: “We need to create a movement that brings right and left together to fight the rich elite.”

The right-wing anti-capitalists first set their sights on pushing back or eliminating the AfD’s economic liberal elements to make way for the “social patriotism” propagated by Björn Höcke, the leader of the right-wing of the AfD in eastern Germany.

Rainer Zitelmann is the author of the recently published book Hitler’s National Socialism.