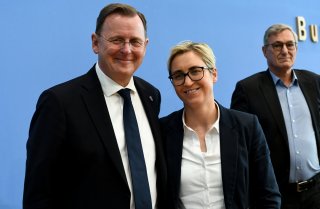 Just over thirty years after the collapse of socialism and the end of the communist dictatorships in the Soviet Union and East Germany, socialism is rearing its head once again. For decades, Berlin stood as a symbol of freedom in the fight against totalitarianism. On Sept. 9, 1948, Ernst Reuter, who was the mayor of Berlin at that time, stood in front of the ruined Reichstag building and issued an emotional appeal: “People of the world, people in America, in England, in France, in Italy: Look upon this city and see that you should not, indeed you cannot, abandon this city and its people!”

Today, freedom in Berlin is once again under threat. For years now, the same party that ruled the communist German Democratic Republic has been in power as a coalition partner in the German capital’s government. Back when Germany was a divided land, the ruling communist party was known as the Socialist Unity Party of Germany (SED). In its modern guise, the party is now known as Die Linke and governs Berlin with two other left-wing parties, the Social Democratic Party of Germany (SPD) and the Greens.

While a post-World War II anti-totalitarian consensus in West Germany was directed equally against national socialism and communism, the communists in the East established what they called an “anti-fascist democratic order.” This is the same goal pursued by Die Linke in Berlin, and it is coming ever closer to fruition.

Abolition of the Freedom of Assembly?

It was only a few weeks ago that authorities banned a demonstration in the German capital against the coronavirus curbs and Berlin’s Interior Minister Andreas Geisel (also a former SED comrade, now an SPD member) declared that he was “not prepared to stand by and watch for a second time as Berlin is misused as a stage for corona deniers, Reichsbürger and right-wing extremists.” As the renowned Neue Zürcher Zeitung commented at the time: “The term scandal is used far too easily and far too frequently nowadays. But Geisel’s words are indeed scandalous. They raise serious doubts about the extent to which Berlin’s red-red-green Senate is committed to upholding the country’s constitution. And they feed the suspicion that the fight against the pandemic is being abused to silence unpopular opinion.” A Berlin court ruled against the ban and the demonstration was allowed after all.

Defeated by the courts, Berlin’s Senate has decided to implement a second decisive measure. Berlin’s left-wing government has now announced a new “Freedom of Assembly Act,” which should make it easier to ban “racist” and “right-wing extremist” demonstrations. The renowned daily newspaper Die Welt explains: “This is a de facto special provision of the law and it is being used against right-wing extremists. Of course, no one wants to see right-wing extremist protestors marching through Berlin, but that is not the point here. This is about whether the government of Berlin should hold the power to legally determine which causes citizens may demonstrate about and which causes are banned.”

In stark contrast, Berlin’s government exhibits unlimited tolerance toward left-wing extremists. The well-known German television magazine Kontraste recently ran a shocking report about two apartment buildings occupied by left-wing extremists: “Rigaer Strasse in the heart of the German capital has long been a hotspot of left-wing extremist violence. In the past one and a half years alone, 346 criminal offences have been committed here. Neighbors living around the two occupied houses openly complain about being harassed. Internal documents show that the left-wing radicals have long since created a lawless zone, overriding the state’s monopoly on the right to use or authorize the use of physical force. Out of misguided political consideration, Berlin’s red-red-green Senate avoids the problem, leaving homeowners and police to fend for themselves.”

Abolition of the Market Economy

not only prohibits landlords from raising rents at any point over the next five years, but it also forces them to actually reduce legally binding in-place rents. In essence, this is equivalent to partial expropriation. And according to the German constitution, no federal state has the right to pass this kind of legislation, since the legislative competence in tenancy law clearly resides with the federal government. But such constitutional considerations do not seem to bother Berlin’s left-wing Senate. Nevertheless, given the fact that the law so clearly violates the German constitution, the Federal parliamentary factions of the CDU/CSU and the FDP have filed suit with the highest German court, the Federal Constitutional Court, on grounds of the law’s unconstitutionality. Incidentally, the “rent cap” is not a new idea. An earlier rent freeze was approved in Germany on April 20, 1936, as a gift from the National Socialist Party to the citizens of Germany on Adolf Hitler’s forty-seventh birthday. The National Socialist’s rent cap was adopted into the German Democratic Republic’s socialist law by Price Regulation No. 415 of May 6, 1955—and remained in force until the demise of communist East Germany in 1989.

For Die Linke and elements of the Green Party, two of the capital’s three governing parties, the “rent cap” is merely an intermediate step on the path to full expropriation. The two parties have previously declared their support for a grass-roots initiative that is campaigning for a referendum to expropriate all real estate companies that own more than three thousand apartments in Berlin. The left-wing daily newspaper taz is already delighted at the prospect of the referendum. The banner headline above a recent article on the referendum campaign declared: “Make Way For Socialism.”

The Senate has also recently unveiled a new marketing campaign for the city. The city’s new slogan, “From I to We!,” is identical to the slogan used in the communist German Democratic Republic to justify the forced collectivization of agriculture. Incidentally, the slogan used by the Nazi party’s youth organization (the Hitler Youth) was similar: “You are nothing, your people everything.”