Germany and America: Headed for a Divorce? 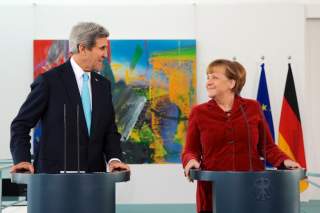 For younger Americans, the relations between the United States and Germany may seem divested of emotion. For many within America’s deep state (the one that occasionally informs the president what it is doing), those relations have become purely instrumental, linked to nothing but competitive advantage. But these perspectives must seem alien to anyone versed in the history of these countries over the past century. Much that was terribly base, but much, too, that was sublime, were bound up in the relationship of these two peoples. The meaning of this history is central to Germany’s identity, and was once central to ours.

The German-American relationship deteriorated ominously a hundred years ago, in 1914, when the outbreak of the Great War threw Germany and America into a host of disagreements over U.S. neutrality, issues that ultimately led to the U.S. declaration of war against Germany in April 1917. A century later, the relationship is again on the ropes; there is bitterness in Germany over U.S. spying and espionage. What Germans thought was a relationship founded on common values and mutual trust has suffered a profound betrayal. A deep anger simmers in Germany over what the Americans have become—apostates to the faith of civil freedom taught to Germany by America after 1945.

Between these two bad moments in 1914 and 2014, there were of course years that were far worse. The first three decades saw a trial by destruction in two separate wars. After 1945, however, something new and very different unfolded. The bitterest of enemies became the best of friends. Not only did America now have a very good relationship with its former hated antagonist, but it also helped Germany achieve a very good relationship with most (not all) of its former adversaries in Europe. Germany came to love America because it owed its renaissance in freedom to American power and American principles. America loved Germany because it was the most resplendent example of the constructive uses of American power, living proof that the awful sacrifices of the world wars had produced a beneficent outcome. Provide stability and deterrence; ensure fair and free elections under a liberal constitution; encourage exchange and cooperation—presto, a brand new Germany that loved freedom as much as anybody, having so long been deprived of it. To Americans, this was intensely gratifying. From pupils, the Germans became partners, and they were quite excellent in both capacities.

The most moving aspect of Germany’s rebirth is the way its people came to terms with their history. Rather than hide their folly and make excuses for their crimes, they acknowledged them, condemned them, and resolved “never again” from the depth of their souls. No other state in 1914 was more severely affected by the virus of extreme nationalism than Germany. As Walter Lippmann observed in 1917, “the doctrine of competitive nationalism” had Germany as its greatest advocate and exemplar. “Other nations had applied it here and there cautiously and timidly. No other nation in our time had ever applied it with absolute logic, with absolute preparation, and with absolute disregard of the consequences. Other nations had dallied with it, compromised about it, muddled along with it. But Germany followed through, and Germany taught the world just where the doctrine leads.” Twenty years later, Germany followed through once more in an even greater war, with even greater attendant evils. After 1945, however, the tiger did truly change his stripes. The impossible happened, and the resulting transformation of West Germany gave hope to the human race. The military colossus became a civilian power; the nation most obsessed by domination became the one who saw most keenly the advantages of partnership. Germany became Europe’s leading economy, but also its best citizen. Germany became an avid institution builder and burden sharer, both before and after its unification in 1990. Having suffered from the virus of nationalism, transmogrified into totalitarianism by war and privation, the Germans learned to recognize its symptoms better than anybody. They still can.

The estrangement brewing today in Germany has to be seen against the backdrop of these historic accomplishments. The backdoor and hidden activities of the U.S. government show a determined effort to squeeze out the elements of friendship, trust, and affection that were so often on display in ceremonial speeches over the last sixty years. They also show that the U.S. national security apparatus is no less voracious than the Stasi in seeking to penetrate the deeper recesses of the human soul. It wants it all; worse, it thinks that wanting it all is perfectly normal. That the United States should treat the Germans in this fashion is really incomprehensible to them, and they struggle to decide whether it is the stupidity and arrogance of the surveillance, or the betrayal and ingratitude that it manifests, that most disturbs them. But they are quite sure that it is a deep corruption of the faith that America once taught them.

After Merkel learned last fall that the United States had been bugging her cell phone since 2002, Obama promised that the United States would stop doing so. He subsequently banned surveillance on dozens of heads of government (but not on their staffs). Germany’s negotiations with the United States broke down. Germany wanted a mutual no-spying pact and thought it might want to join the “five eyes” group—which includes the United States, Great Britain, Australia, New Zealand, and Canada. The Anglosphere, we have learned, is not just a projection of imaginative writers but reflects a fundamental distinction in the security apparatus. These are the nations that agree not to spy on one another (more or less), but also agree to facilitate their mutual spying on everybody else—an instance, no doubt, of what the Germans once called “Anglo-Saxon morality.” Germany, it appears, initially angled to become a member of this dubious establishment, but then blanched when they learned the additional responsibilities for spying it would entail. In any case, it was not on offer from the United States. In a tumultuous meeting, National Security Council advisor Susan Rice told German officials that it would not even extend the “no-spying” guarantee beyond Merkel. If it did, other allies would want the same treatment. “The United States,” Rice declared, “is not going to set a precedent.” That U.S. response did not still, but rather confirmed, Merkel’s immediate reaction to the scale of American spying: “This is like the Stasi.”

Germany’s response to the latest disclosures has been limited to the expulsion of the CIA station chief in Berlin, hardly more than a gesture. All through the winter, the Germans prefaced every remonstrance against the illegal spying of the United States with the declaration that the Atlantic Alliance was the rock of their security. (“I love you and will never leave you,” said the wife to the husband, wishing to register a complaint. “Now, about that affair.”) That the United States should respond to these protestations by inveigling to get the documents on Germany’s parliamentary inquiry into the spying is about as rich as it could be. (“Could we talk about this tomorrow, honey? I’m going out tonight.”)

Germany comes to this controversy from what it perceives as a position of profound dependence. The Germans are a long way from considering a world without NATO and the American “guarantee.” Every sanction they can think of would end by damaging a relationship they want to preserve. They want the Americans to change without calling anything fundamental into question. That they have been spectacularly and almost mockingly defied in these latest transactions leaves them angry but with nowhere to go. But it also establishes the desirability, in principle, of an exit. Both “loyalty” and “voice,” as ways in which Berlin can imagine its relationship with Washington, are deeply wounded by the U.S. attitude.

Much as the indispensability of the U.S. role in Europe is treated as a sort of first axiom by the security establishment—in Washington, Brussels and Berlin—there are substantial reasons to doubt it. There is a threat of Russian domination only in the overheated imaginations of the liberal interventionists, who cannot tell the difference between a boundary dispute and Napoleonic ambitions. The Russians want decent treatment of the rights and interests of “their people” in their near abroad, in whom they have a justifiable interest, but otherwise they are attracted to multilateralism and quite conservative about the use of force. The Ukraine crisis hardly disproves this, given the culpable role of the West in sponsoring the February Revolution in Kiev. With or without Ukraine, Russia’s vaunted Eurasian project is just a customs union, a defensive barrier for a vast region of weak industries. Russia knows that its increasingly decrepit nuclear weapons are good for nothing save deterrence, and that to employ them as an instrument of intimidation would make Russia a pariah and be grossly self-defeating. The elite is conscious of Russia’s deep societal and demographic weaknesses and, all things considered, would prefer a good relationship with the West to a better relationship with China. A coalition of Germany, Sweden, France and Britain alone—to say nothing of the larger EU—is easily a match for Russia in Europe, but the more basic point is that Russian foreign policy cannot be about the “domination” of Europe. That would be an absurd objective for them, and they know it. In relation to the other European powers, Russia is less powerful today than at most periods from 1713 to 1913, yet on none of those earlier occasions was it able to dominate the continent. Russia came closest in the decades after 1815, an era that contemporary political scientists describe as an episode in Britain’s “liberal hegemony.”