Germany and Russia Are Getting Closer—Here's Why 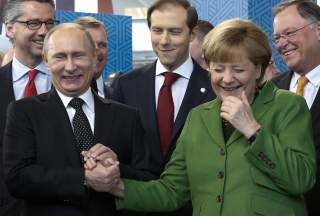 Recently, Lyle J. Goldstein wrote for The National Interest a piece on how German relations with both the United States and, more importantly, Russia were in trouble. His primary source on the latter appears to be a single interview of German Defense Minister Ursula von der Leyen with Ren TV. Von der Leyen, considered in the running to succeed Jens Stoltenberg as Secretary-General of the North Atlantic Treaty Organization (NATO), and coming from the CDU’s more feminist wing, tends towards a more adversarial relationship with Russia than the average German minister.

Goldstein rightly acknowledges that German-Russian relations saw a steep downturn following the crisis and war in Ukraine in 2014, but ties have been slowly normalizing again over the past two years. Though Germany did take command of the NATO Multinational Corps Northeast Battalion in Lithuania, Germany has since been a ray of hope for Russian diplomatic efforts in NATO Europe.

Perhaps the most glaring example of this is the ongoing saga of NordStream 2, the proposed expansion to the direct German-Russian gas pipeline in the Baltic Sea that avoids the more anti-Russian countries of Poland and Ukraine. Opposition to the pipeline expansion from central and eastern Europe, and even Denmark, has been increasing, leading to Lavrov to officially complain in October 2017 of political interference in the project. This opposition also resulted in Gazprom reducing funding for NordStream 2 that same year.

Yet, despite these Baltic-Ukrainian efforts to stop the pipeline, Germany continues to support it with German companies producing equipment for the project. German Energy Minister Peter Altmaier visited Russian Prime Minister Dmitri Medvedev on 15 May 2018 to discuss “large-scale joint projects in energy.” Though Nordstream 2 was not mentioned explicitly in the press readout, it could not have been far from their minds.

Furthermore, German-Russian diplomacy has been very active in 2018 so far. For example, among NATO members only France and Turkey have held more official talks with the government of the Russian Federation than Germany. Even then the number of German-Russian discussions would have been higher had it not been for Germany's ongoing government formation talks earlier this year, French President Emmanuel Macron's especially active diplomacy and Erdogan's increasingly independent strategy in Turkey. Indeed, Germany has had more engagements with Russia than unaligned, historically pro-Russia Serbia this year.

Moreover, the Russian media have taken to calling German-Russian relations one of "renaissance” in the wake of these summits, though Lavrov officially claims that relations never actually soured. At the press conference following Merkel and Putin’s meeting, Merkel described NordStream 2 as a project very much underway for which it would provide an “active role” and “assistance,” despite ongoing questions of Russian natural gas exports to Ukraine should the project continue.

The dry spell of Russia’s diplomacy in Europe that set in after the outbreak of the Ukraine crisis in 2014 also appears to be, if not coming to a definite close, at least opening a new chapter. The price of Urals crude oil, a key indicator of Russian budgetary stability, has rebounded in 2017 amidst a thriving world economy. Russia’s demographic crisis has stabilized. Finally, although the European sanctions regime has survived much longer than anyone anticipated (and may yet survive), a Russophile government seems on its way to power in Italy.

Since the Russian-Belarusian Zapad-2017 exercise in September 2017, which frightened some NATO members, Russia has had only one joint military effort with a European NATO member. That one joint exercise was done together with Germany during Zapad-2017. Germany and Russia worked together in a search for veterans’ remains from the Second World War on September 15. That effort will be followed by another, Barents-2018, a joint Russian-Norwegian naval exercise held in the Arctic scheduled for later in May 2018.

Russia today remains historically isolated from Europe by post-Soviet standards, especially in the wake of the attempted assassination of double agent Skripal. But it is also true that Russia is recovering from its isolation and that its relationship with Germany is probably the best one it has inside NATO besides wayward Turkey.

Nicholas J. Myers is a Russian and Belarusian military analyst at War Vs. Peace. You can follow him @WarVsPeaceOrg or see his research at warvspeace.org.​

Image: Russian President Vladimir Putin holds the hand of German Chancellor Angela Merkel as they visit the Russian booth during a tour through the Hanover Messe on the first day of the industrial trade fair, in Hanover April 8, 2013. Russia is the partner country of the Hanover fair 2013, which runs from April 8 -12. REUTERS/Fabrizio Bensch