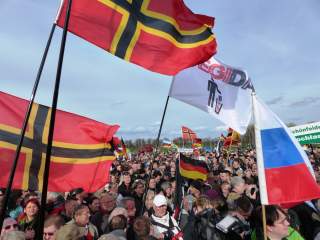 IN STUTTGART I was awoken by a large man outside my hotel window wearing a niqab. “I am the protest for the AfD / and that is totally ok!” went the hoarse refrain. It was the annual convention for the Alternative für Deutschland, Germany’s no longer fledgling far-right party. More than four thousand of the faithful had converged in Stuttgart to make it the largest rally of its kind in Germany since the war. (Unlike other German political parties, which send delegates to conventions, the AfD leadership, true to its populist credo, had invited all members to attend.) For AfDers passing by, the niqab man from Pforzheim was a Charlie Hebdo caricature come alive: a bit of a chore for the media-relations department, perhaps, but nevertheless a rude emblem of the cause. As I walked across the Stuttgart Messe from my hotel to the convention hall draped in the party’s sky-blue banners, the AfDers came under fire from young Greens and Antifascist protesters stationed in the adjacent parking lot, lobbing cake and packets of excrement over the security perimeter. “Blue is the new Brown!” they shouted. “Voting AfD is so 1933!” An Austrian venture capitalist directed me toward some cover, as we followed the AfD leaders through a thick row of bushes up an embankment into the main hall. “AfD forced to cut path through bushes. What poor rabbits!” was the comment of the Tageszeitung. “At least the bushes were German bushes.”

As a right-wing party that is likely to gain seats in the Bundestag in this September’s federal election, the AfD is more than a novelty in postwar German politics. In a country dominated by Angela Merkel’s Christian Democratic Union (CDU), however, there are only so many inroads it can make before its more viable platforms are cannibalized by the CDU. Ever since Merkel was caught unawares on her right flank, she has been speaking AfD talking points—from the proposed burqa ban to the swifter banishment of undesirable refugees—and thus far has gamely contained the threat. Merkel benefits, too, from previous practice down the slalom course to the chancellorship, which requires a hard-right turn on bended knee for her sister party’s constituents in Bavaria—where she tightly smiles alongside its local chieftain, Horst Seehofer, a man who has publicly accused her of conducting a “reign of injustice.” Then comes a soft slide to the center for the rest of the year in order to blur the miniscule differences between her party and the Social Democrats. What makes the AfD upstarts irritating for Merkel is that they make this blurring maneuver more difficult.

Inside the vast, hangar-like space of the Stuttgart Messe, the AfDers were already tipsy with the feeling of making history. The Alternative für Deutschland is a party of elbow patches and ascots, but also one of leather bodysuits and high-and-tight haircuts. Milling about the breakfast tables were men in Trachten jackets, surgically sculpted women, a Trappist monk, a child on an electronic scooter, and a man in a green uniform modeled on the one his ancestor wore in Blücher’s army at Waterloo (“Napoleon was the beginning of this EU shit”). The atmosphere was warm and burgherly, with a slightly forced sense of camaraderie. Conspiracy theories were politely passed around as if they were snaps of newborn children. There was the reaffirming presence of right-wing neighbors, brothers and sisters from Austria and Switzerland and German-speaking enclaves beyond. In a corner of the room I saw Václav Klaus standing alone, testing the coffee. Fed up with the staid rituals of Germany’s Altparteien, “the old parties,” the AfDers were preparing themselves for unknown territory: an open-floor debate over issues, and with it, the prospect of the sort of political exhilaration the rest of Germany regards in bad taste. A YouTube video AfDers like to circulate shows Merkel pulling the German flag out of the hands of one of her colleagues at a Christian Democrat rally, disposing it out of view of the camera and giving him a reproaching shake of the head. In Stuttgart, the German national flag and the AfD flag were everywhere, rivaled only by the awkward presence of placards for Turkish Airlines, the refugee carrier of choice.

The convention was not merely intended to channel grievances and rage. It was also meant to prove to the German press that the AfD was not a flash phenomenon, but a professional, fully functioning political party. To that purpose, the AfD leaders onstage lapsed into reflexive procedural frenzy—Vereinsmeierei—about how to conduct the voting: voting about whether to vote with electronic devices or a show of hands. A 1,250-page party program had been circulated. Clauses appeared on a giant blue screen, and AfDers queued in two lines for the microphones to make changes and offer amendments. “Burqas and hijabs do not belong in Germany,” read one clause. “But,” said a plaintive man in plaid, “we cannot just ban all headgear—handkerchiefs on women’s heads is the traditional German style—our grandmothers wore those!” “We need to make it specific: only burqas and niqabs should be banned—we need to be precise in our language.” Germany’s status as a country of immigrants was roundly rejected. “We should be a land of skilled immigrants,” shouted one man. Mild applause. “We should be a land of no immigration except special immigration that we want,” said another man. Raucous foot-thumping. Already a few hours in, the appetite for debate was quelled. The AfDers waited for their pet issues to come on the screen, which made them brush other people’s pet issues away from the microphone as soon as possible. We were moving at a brisk, auction-style pace. In the controversial categories, the more radical proposals rose to the surface as if obeying some hidden political law. There was disagreement over the merits of market reforms, the NATO alliance and the public funding of German theater, but one clause garnered no dissenters; it was the tie that bound: “Islam does not belong in Germany.”

THOUGH IT is hardly a difficult feat, leadership of the Alternative für Deutschland has more eye-catching creatures than the rest of the German political establishment combined. There is the gamine party cochair, Frauke Petry, and her husband, Marcus Pretzell, the AfD cohead of North-Rhine Westphalia, who were once treated as enterprising transgressors by the German tabloids. But now, in their effort to turn the party in a more “realistic” direction to woo “moderate” voters, they have been beaten back by a portion of the party that wants the AfD to be a “fundamental opposition” party that does not seek to soften its tone in order to make alliances, but rather to force other parties to toe its hard line. Petry likes to quote Kant, cites the studies of the Oxford economist Paul Collier and claims to have developed her views on Islam from deep teenage reading of V. S. Naipaul. Pretzell has called for more Germans to own firearms—which confuses almost everyone—and is an expert at worrying the elderly about the EU’s plans to abolish paper money. Then there is Alexander Gauland, the face of the “fundamental” opposition camp. He is a disgruntled CDU exile, prone to regular Trumpian outbursts, who holds a personal vendetta against Merkel for crushing his rebel CDU faction that secretly plotted against her. Together with the fresher face of Alice Weidel, a former Goldman Sachs foot soldier in China, who is the AfD’s latest sop to its pro-business constituents, Gauland is the candidate for the AfD’s bid to enter the Bundestag in the general election in September. Holding up the party’s base is Beatrix von Storch, an AfD representative to the EU, whose grandfather, Lutz Krosigk, was the short-lived Nazi chancellor after Hitler. A duchess of the House of Oldenberg who clings to her aristocratic roots and wears riding outfits at her public appearances, she is the party’s talk-show warrior. The AfD’s resident Islam expert is Hans-Thomas Tillschneider, a small man in his thirties, who was born in Romania and who has published peer-reviewed articles in American journals on Koranic jurisprudence. The house philosopher is Marc Jongen, an assistant professor of aesthetics at the University of Karlsruhe, who was born in Italy (“South Tyrol” on his curriculum vitae) and became a German citizen five years ago.

Finally, there is Björn Höcke. A former history and gym teacher, he is the AfD’s steely-eyed Robespierre, whose yearning to normalize Germany’s Nazi past makes the more practical AfDers perpetually try to purge him from their ranks. As Höcke entered the hall late on the first day of the convention in Stuttgart, he was loudly cheered by his faction. An avowed anti-Atlanticist who claims “our once respected army has deteriorated into a de-gendered and multi-culturalized response force in the service of the USA,” Höcke worries openly about the dilution of the ethnic German population due to the “reproductive strategies” of Africans. In a country where the average birth rate is 1.38 children per family, no one can fault the AfD leadership for not doing its part to perpetuate the German Volk. Höcke has four children; the AfD’s other co-chair, Jörg Meuthen, has five; Petry and Pretzell recently added a ninth child to their combined eight, in time for the federal elections in September.