Get Brexit Done? Be Careful What You Wish For. 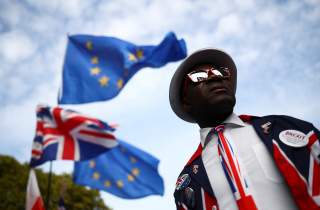 It is tempting to conclude that Boris Johnson has fundamentally reshaped British politics. With his stunning electoral victory last week, Johnson secured a majority in the House of Commons that, in ordinary times, would suggest up to ten more years (two parliamentary terms) of uninterrupted Conservative rule. It was a landslide that could easily auger not just a new relationship between Britain and the European Union (EU), which will be Johnson’s first order of business, but also a wholesale realignment of the British electorate.

The European front will be the most straightforward for Johnson to tackle, at least at first. It has been three and a half years since Britons voted to exit the EU via referendum, yet since then Parliament has repeatedly failed to find agreement on the precise form that “Brexit” should take. Some Members of Parliament (MPs) have urged a quick and comprehensive break with every EU institution, both political and economic, while others have schemed to reverse the outcome of the referendum and remain inside the EU as a full member. Just last Thursday, the second, third, and fourth largest parties in the British Parliament (Labour, the Scottish Nationalists, and Liberal Democrats) all stood on platforms of putting the question of EU membership back to the people in a second vote.

Now that he is equipped with an unassailable parliamentary majority of eighty, Johnson is in a position to lead Britain out of its Brexit quagmire. There can be no more lingering doubts over the legitimacy of the referendum result. The various rearguard actions to stay inside the EU have each been defeated. All that remains is Johnson’s government in possession of a clear mandate to implement the first (formal) phase of Brexit and to move onto negotiating the future of British-EU relations.

This much, at least, is clear enough. But the wider implications of Johnson’s triumph for domestic politics are far more difficult to discern. On its face, 2019 is a prime candidate to go down in history as a “critical” (or “realigning”) election. Working-class voters deserted Labour in droves, resulting in some sensational upsets in seats (districts) such as Leigh in Greater Manchester, which has never returned a Tory MP since its establishment in 1885 and was regarded as an ultra-safe Labour stronghold just two years ago. If these gains are sustained or expanded in future elections, then the Labour Party will enjoy no viable pathway power at Westminster. The Tories will be in the permanent majority.

Johnson was able to tear down Labour’s so-called “red wall” (the urban centers of northern and central England) by tilting the country’s politics to revolve around a Remain-Leave axis rather than the traditional left-right divide. Of course, Brexit was not the only issue at play during the election—the stupendous unpopularity of Labour leader Jeremy Corbyn was another obvious factor enabling the Tories’ raids on Labour’s heartlands—but the European Question was probably the most important feature of the campaign.

Until recently, both Labour and the Conservatives had been badly split on the question of how (or even whether) to implement Brexit. Defections of Tory MPs deprived Johnson of his parliamentary majority back in September of this year; a subsequent rebellion among those MPs who remained led him to seek a snap December election.

But Johnson stole a march on his political opponents when he purged his party of twenty-one disloyal MPs who had sought to delay or soften Britain’s withdrawal from the EU. It was a bold and ruthless act that drew heavy criticism, but it ensured that the Conservatives would not be plagued by infighting or indecision when it came to European policy, and would instead be able to rally around a clear message of delivering Brexit as quickly as possible.

Wrapping themselves in the mantle of Brexit proved to be a winning formula for the Conservatives. The party became the obvious political home for voters of all political stripes who simply wanted to see Brexit happen without further delay. The Labour Party, on the other hand, pleased neither Leavers nor Remainers with its confusing promise to negotiate a new Brexit deal that would then be put to a public vote but without the endorsement of the government.

Johnson was helped enormously, of course, by the decision of the Brexit Party—a single-issue political entity created less than twelve months ago, which exists solely to campaign for a hard Brexit from the EU—not to stand against Tory incumbents. This allowed the Conservatives to go on the offensive, safe in the knowledge that their existing MPs would face an easier time holding onto office than their Labour counterparts. Sure enough, the Conservatives suffered few losses. But in district after district, the Brexit Party syphoned off enough votes from Labour incumbents to let Conservative challengers in through the middle. This was a critical factor in Labour’s collapse.

But does any of this suggest that Britain is experiencing a lasting realignment of political loyalties?

There are big reasons to be skeptical. Most importantly, there is nothing to stop Labour’s working-class deserters from returning to the party once Brexit has been implemented (at least in formal terms) and the Brexit Party has ceased to exist. Anecdotally, at least, it seems to be the case that many traditional Labour voters felt as though their party had abandoned them rather than the other way around.

Second, it is historically unusual for a Conservative leader to have success uniting his party around a common European policy—so much so, in fact, that this rare moment of Tory consensus should be regarded as a precarious thing indeed, and perhaps even ephemeral. As recently as two months ago, the Tories were so badly split on the question of Brexit that many observers predicted a fracturing of the party.

For the time being, Johnson’s expulsion of recalcitrant MPs has bought the party some time. So, too, will his dramatic success at the ballot box. But divisions might yet reemerge once the reality of Brexit has set in. Especially with an expanded electoral coalition to look after, it will be difficult for Johnson to bridge the urban-rural, labor-capital, and north-south divides that now cut across the Tory fold. No formulation of British-EU relations will please both the financial sector and Britain’s farmers, big business and blue-collar workers, the leafy shires and inner cities. Choices will have to be made. And with hard choices come political openings for opposition parties.

Much will depend on whether Johnson and his advisers fully grasp the relationship between foreign economic policy—in this case, the “final status” relationship with the EU—and the everyday fortunes of ordinary people. The simplistic slogan of “get Brexit done” suggests that they probably do not, and still consider European policy as something that can be pursued in isolation from domestic priorities.

It is possible, of course, that Brexit will be implemented in a way that bolsters the economic opportunities of small towns and former industrial areas, in which case the foreign policy goal of “getting Brexit done” will complement the domestic ambition to establish the Tories as the new party of the working class. But it will be a tall order indeed. More likely than not, any new set of political and economic arrangements across the English Channel will spell uneven distributive consequences for ordinary people, complicating the task of holding together a broad Conservative coalition.

For now, it is safest to say that Johnson has not yet remade British politics in a fundamental sense. He has won and won big, but there is no telling how long his broad-based popularity will last. To be sure, a revolution in British politics is coming—but it will only happen when Brexit is finally settled, and its consequences are fully understood. It is even possible that the door is left open to a Labour resurgence if a new trading relationship with Europe (or lack of one) results in a decidedly worse economic situation for much of the country, which looks likely.

Get Brexit done? The Conservatives ought to be careful what they wish for.