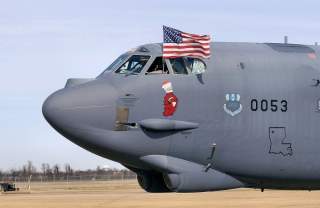 Mines are the ninjas of warfare: silent, deadly and a bit unsavory. Sneaky weapons that are extremely effective not just for the damage they cause, but also for the fear and uncertainty they sow.

Naval mines are especially potent. American air-dropped mines in Japanese waters in 1945--chillingly but accurately code-named Operation Starvation--sank more ships than U.S. submarines in the final months of the war. The 1972 mining of Haiphong harbor helped drive North Vietnam to the peace table, while Saddam Hussein's underwater booby traps threatened U.S. naval supremacy in Desert Storm. “In February 1991 the Navy lost command of the sea—the North Arabian Gulf—to more than a thousand mines that had been sown by Iraqi forces. Mines severely damaged two Navy warships, and commanders aborted an amphibious assault for fear of even more casualties,” says a U.S. Navy mine warfare history.

But when a high-altitude B-52H bomber dropped a Quickstrike naval mine on September 23, 2014, something extraordinary happened: instead of falling into the sea below, the mine glided to a splashdown 40 nautical miles away. The reason? The mine had wings.

It was a hybrid weapon, a combination of a Quickstrike mine and JDAM, or Joint Direct Attack Munition, the clever concept that attaches fins and GPS guidance to conventional “dumb” bombs, thus turning them into cheap guided bombs. This Quickstrike mine had been fitted with JSAM-ER, which slips actual wings on to the weapons, enabling it to glide long distances. The new weapon, designated GBU-62B(V-1)/B Quickstrike-ER, has a range of 40 nautical miles when launched from 35,000 feet.

Welcome to the advent of the stand-off mine.

“This effort marked the first advance in aerial mine delivery techniques since 1943, and demonstrated a capability that substantially changes the potential of aerial mining in a threat environment,” writes U.S. Air Force Col. Michael Pietrucha in an article in Air & Space Power Journal.

The problem with aerial minelaying is that it is tricky and dangerous, requiring aircraft to fly low-level drops into the teeth of enemy air defenses.

But stand-off mines create a new world of minelaying. Many U.S. tactical aircraft, as well as the B-1, carry JDAMs now, so why shouldn't they be able to drop mines?

“There is no practical difference between JDAM employment against a fixed ground target or a fixed location under shallow water; no additional training for basic mine laying is required," writes Pietrucha. High-altitude glide mines also allow aircrews to drop their loads much farther outside enemy air defenses.

The threat of conflict in the South China Sea has focused attention on high-tech weapons such as the F-35 and Chinese ship-killer ballistic missiles. But the beauty of the JDAM mine is that it is fairly low-tech. The Quickstrike mine--a 2,000-pound aircraft bomb configured as an underwater weapon--dates back to 1983, while a JDAM kit costs about $20,000.

Pietrucha paints several scenarios where U.S. glide mines could have a major impact. “Headquarters People’s Liberation Army Navy fleet at Zhanjiang, Ningbo (Zhoushan), and Qingdao are all susceptible to interdiction, with Zhoushan the easiest to isolate and Ningbo the most difficult. The fleet’s submarine pens on Hainan Island have limited approaches and might be bottled up from standoff range. A sunken ship in a shipping channel can prove brutally effective.”

The Iranian port of Bandar Abbas would also be a prime target, Pietrucha adds. Then there are vital rivers such as the Yangtze, as well as shallow-water choke points such as the Dardanelles, Gulf of Finland and Straits of Hormuz.

Pietrucha raises the intriguing possibility of using JDAM ER/Quickstrike to place instant defensive minefields in the face of an enemy amphibious assault. It's a threat that should give China pause. Should Beijing attempt to seize Taiwan or disputed Pacific islands, minefields could easily disrupt the landings. Pietrucha also suggests the next logical step, which is adding an engine to the Quickstrike ER/JDAM and thus creating a mine-missile with a range of hundreds of miles.

So what are the drawbacks of air-delivered stand-off mines? Unfortunately, there really aren't any. As always, mines are cheap, hard to detect and sweep, and create havoc out of proportion to their actual damage. True, there is always the chance of blowback from sinking neutrals, but for sheer cost-effectiveness, mines can't be beat.

Unfortunately, the country that has the least to cheer from stand-off mines is the United States. If America can stick wings on an underwater bomb, so can China, Russia, and even Iran and North Korea. Whether they will be as sophisticated as American equipment is immaterial. Mines don't have to be particularly sophisticated to wreak havoc or deny access to U.S. ships and amphibious forces, and the current mélange of American minesweeping capability--11 aging Avenger-class minesweepers, 32 planned Littoral Combat Ships with sweeper modules, old and accident-prone Sea Dragon helicopters--doesn't exactly inspire confidence.

On the other hand, while China is building minesweeping drones, mines might paralyze its export traffic. Perhaps nobody wins in this scenario.

Either way, the stand-off mine concept has slipped its tether. Naval warfare may never be the same.