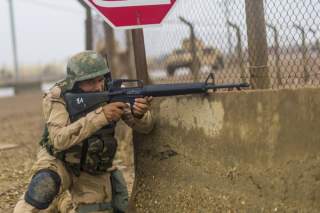 2016 continues to see young Muslims inspired by radicalism commit terrorist attacks across the globe. In Orlando, forty-nine were killed and fifty-three more injured at the hands of Omar Mateen, a single gunman who pledged allegiance to ISIS. In the Philippines, at least eighteen soldiers were killed and fifty-two injured in clashes with Abu Sayyaf militants. In Indonesia, eight were killed and twenty-four injured in several explosions directed by ISIS. The events, though unique in scale, felt eerily familiar for the United States and the rest of the world. They are a continuation of ISIS’s rhetoric falling on receptive ears, with social media often being the tool used in the recruitment process aimed at reaching even the lowest-end user, as seen by Orlando’s lone-wolf attack.

In fact, as ISIS loses territory and is driven off the battlefield, it is likely to further turn to social media to groom future lone wolves to carry out attacks at home. Look no further than ISIS’s official spokesperson and senior leader Abu Muhammad al-Adnani’s statement that “The smallest action you do in their heartland is better and more enduring to us than what you would do if you were with us.” Indeed, ISIS is evolving into a “virtual caliphate.”

Extremist groups today are particularly skilled at social media. The radical activity online includes Hollywood-quality videos that glorify violence, and offer a sense of brotherhood and belonging in hopes of reaching young Muslims who may be disillusioned with their current social position. These groups boast a social media presence that releases ninety thousand tweets and other media responses every single day. Social media may not be the decisive factor in the decision to radicalize and travel to the Syrian battlefields or downtown Jakarta, but the nature of terrorism requires only few to inflict large-scale damage and death to many.

A systematic and coordinated response to the narrative that groups like ISIS are trying to promote through social media is necessary in order to combat further radicalization and recruitment efforts. This counter-narrative can serve to glorify the successes of anti-extremist military operations, highlight the failures and embarrassments of ISIS, and expose the fallacies of radical ideology.

The Impact of Social Media

In Asia, the manipulation of social media and the spread of radical rhetoric are furthering the causes of extremist groups throughout the region. Anti-Vietnamese sentiments in Cambodia, which date back thousands of years to the Khmer Empire, have recently flared up again. Facebook is being used to fan xenophobia, where photos and even border treaties are being falsely edited online to draw further racist sentiments. In China, a country home to more than three hundred million social media accounts, more than ten million online signatures were gathered for a petition to oppose Japan’s United Nations Security Council bid in 2005, a result of rising anti-Japanese sentiment.

What is particularly concerning is the manipulation of social media by extremist groups that operate in the name of Islam. Southeast Asia is home to the largest population of Muslims in the world, claiming more than 220 million Muslims in Malaysia and Indonesia alone. This massive population, alongside an increasing internet-penetration rate (mostly through smartphones) and access to social media, provides fertile ground for extremist groups like ISIS to spread their message. While it is important to note that the vast majority of Muslims in Southeast Asia oppose the use of violence in the name of Islam and are against radical groups like ISIS, there remains a significant minority that may sympathize with such extremism. 2013 Pew Research findings state that 27 percent of Muslims in Malaysia think that attacks on civilians are sometimes or often justified, while Indonesians felt favorably toward the extremist groups Al Qaeda and the Taliban at 23 percent and 21 percent, respectively. These figures suggest that Southeast Asia allows ISIS the space to operate and to effectively radicalize at least those few needed to engage in acts of terrorism.

The stakes are high in Southeast Asia and the rest of the world, and the battle for hearts and minds will determine the effectiveness of recruitment campaigns. The virtual battlefield is a critical starting point, a space where extremism can falter to reason and reality.

The Muslim world overwhelmingly opposes extremist ideology and terrorism, putting ISIS in a minority. And an advantage in numbers, resources and capabilities means creating an anti-ISIS counter-narrative could be an easy win for the international community.

A counter-narrative social media campaign would need to consist of a broad international coalition that includes social media accounts belonging to both governments and civil society. The latter is important, given that many of those at risk of radicalization are inherently distrusting and displeased with existing governments and the current world order. Once this virtual coalition is established, the campaign can begin to function in three critical ways: glorifying the campaigns and successes of anti-ISIS forces, exposing the losses and embarrassments of ISIS, and mobilizing influential Muslim voices to lead the ideological battle against radicalism.

The allure of violence is undoubtedly an effective tool of ISIS’s campaign in reaching young men, seducing them with visions of power and adventure that may be lacking in their life. This helps to explain ISIS videos and images that boast about the group’s bloody deeds. This attraction to some of the most basic human behavior can be redirected to the realities on the ground: the overwhelming successful military operations of forces combating ISIS. The campaign should feature footage of Iraqi security forces closing in on both Fallujah and Mosul, the more than one thousand Russian air strikes that have destroyed an estimated five hundred trucks carrying oil, or the numerous victories of Shiite militias, Sunni tribes and Kurdish forces that are all pushing back ISIS in critical areas.

The 2015 U.S. raid to free seventy Kurdish prisoners held by ISIS in Iraq is evidence to the potential influence that the aforementioned victories could have though social media. The rescue operation was filmed through a helmet camera on one of the Kurdish soldiers. Leaked footage that ended up online through Kurdish media reached nearly seven hundred thousand views on YouTube in just five days. Another similar video that shows Kurdish forces capturing three ISIS members has reached nearly two million views. Neither of these videos were used by outside governments or media.

These types of videos are clearly an effective tool, especially when compared to the most popular anti-radical video released by the U.S. Department of State that peaked at 120,000 views. Unfortunately, this type of heroic footage is underutilized and often the exception rather than the norm.

Additionally, the counter-narrative should expose the embarrassing failures of ISIS both on the battlefield and within their own ranks. Given the lack of training and experience that exists among many ISIS fighters, self-inflicted fatalities from botched explosives as well as a lack of basic understanding of advanced weaponry are frequent occurrences. Also, the high number of defections and killings among ISIS ranks can provide further fodder for a counter-narrative to expose embarrassing realities.

For some potential recruits, the appeal of ISIS may be ideological, with those with a weak grasp of Islam being particularly at risk. Because of this, the role of influential voices and organizations in the Muslim world are critical. Thankfully, there are models of success that can be expanded. Nahdlatul Ulama, an Indonesian Muslim organization that claims more than fifty million members, preaches a message of tolerance in its online campaign against jihadism. NU, which releases a plethora of anti-jihadism videos and posts in both English and Arabic, may be an important variable in the fact that Indonesia, home to the highest population of Muslims in the world, has experienced some of the lowest numbers of fighters traveling to the Middle East to fight for ISIS.

But other influential groups are lagging. Muhammadiyah, Indonesia’s second-largest Muslim organization with twenty million members, has yet to engage in a similar counter-narrative campaign—despite its longstanding support for secularism. And Malaysia, home to twenty million Muslims, seems more concerned with which political party is more Muslim than preaching tolerance and peace.

It is imperative that large and influential Islamic voices join the virtual counter-narrative and help to fill in the gaps in other countries that are home to large populations of Muslims. Those governments, which place antiterrorism high on the political agenda, have a role to play in mobilizing these religious groups and working with them to communicate their messages.

ISIS’s marketing efforts are sophisticated and appealing, and can be expected to increase as they shift into a virtual caliphate—but it remains a tiny minority of the Muslim world. An international counter-narrative that combines governments and civil society can effectively flood the virtual space that ISIS operates in, drowning out radical voices and replacing them with the sobering reality that society has no place for extremism.