Get Ready for North Korea's Next Summit Showdown 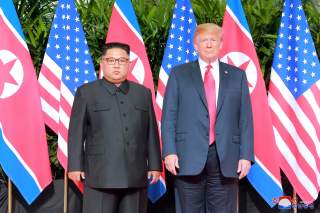 North Korean spymaster Kim Yong-chol came to town and a summit announcement resulted. The White House tweeted that President Donald Trump “looks forward to a second summit with Chairman Kim.” The meeting is supposed to occur before the end of February. Vietnam has been suggested as a possible location.

Cynicism about the planned summit is rife in Washington. The first meeting last June resulted in dramatic images but little denuclearization. Neoconservatives are frustrated that the president has yet to send in the bombers. Leftish critics who a year ago complained that he was about to start a war now insist that he has been played by the North’s Kim Jong-un. However, denuclearization should not be seen as the upcoming summit’s principal, if not only, objective.

Despite Trump’s apparent confidence in North Korea’s supreme leader, no one in Washington other than the president appears to believe there is much chance that the Democratic People’s Republic of Korea intends to disarm. That is one reason for why Pyongyang desired another summit. If an agreement is possible, the DPRK believes, then it is through the president, not the secretary of state and certainly not the national security adviser. Last week a North Korean diplomat complained to me about the current diplomatic impasse but expressed hope that “if the summit occurs it will contribute to breaking the stalemate.”

In fact, it should surprise no one if Kim proves unwilling to yield weapons so costly to develop, as well as the capability to construct them. Nukes offer international status that much larger nations lack. The weapons also reinforce the regime’s domestic meme of protecting its people from foreign enemies, while rewarding the military for its loyalty. Most important, as my North Korean interlocutor argued, the weapons are “the last option for simple deterrence.” Well-deserved skepticism of the DPRK’s claims notwithstanding, Washington’s overwhelming conventional military strength combined with its penchant for regime change make nuclear weapons the only effective guarantee for any government on Uncle Sam’s naughty list.

However, denuclearization should be seen as a means to an end: peace and security. That is why the Republic of Korea has so avidly embraced what appears to be a new course under Kim. One could end the threat of North Korean aggression by reducing willingness as well as capabilities. In this sense reconciliation, if genuine—a major condition, of course—is an existential issue for the South. South Koreans could sleep more comfortably if convinced that the North, though still armed with nuclear weapons, was unlikely to use them.

Ironically, the same holds true for the DPRK. Indeed, in Pyongyang’s expressed view, reconciliation is the precondition for denuclearization, which makes sense, or as my North Korean colleague put it, is “logically sequential.”

If Kim Il-sung was willing to start a war, then he almost certainly would have been willing to use nukes in any renewed conflict. But that doesn’t change the fact that he may have seen the nuclear program as fundamentally defensive. The North always sought to retain its independence from its two large communist neighbors, with which its relations often were uneasy.

Nor did Pyongyang want to rely on them for protection against America. As the North Korean diplomat put it, “We are now prepared to achieve peace and prosperity on our own. A security guarantee cannot be provided by outside.” And the DPRK had much to fear: Washington military strength continued to grow throughout the Cold War and beyond. Moreover, the United States considered using nuclear weapons during the war and later stationed them on the peninsula. Even after their withdrawal they remain within easy reach for use in any conflict.

Pyongyang lost its allies with the Soviet Union’s collapse and China’s transformation. Its position ever more dominant, the United States became more willing to use its conventional might against small nations, most recently and dramatically Afghanistan, Iraq, and Libya. In the latter case the regime abandoned its missile and nuclear programs in return for Washington’s promised beneficence. Regime survival is North Korea’s highest objective, so the brutal internal repression and dangerous external provocations of the Kim dynasty do not change the fact that it similarly fears America’s capabilities and willingness to use them.

That is why the North Koreans point to what they insist is the conscious ordering of provisions in the June 2018 summit statement:

1. The United States and the DPRK commit to establish new U.S.-DPRK relations in accordance with the desire of the peoples of the two countries for peace and prosperity.

2. The United States and the DPRK will join their efforts to build a lasting and stable peace regime on the Korean Peninsula.

3. Reaffirming the April 27, 2018 Panmunjom Declaration, the DPRK commits to work toward complete denuclearization of the Korean Peninsula.

Argued my North Korean colleague, “logically speaking, numbers one, two, and three are sequential. If there are no number one and two, logically there should be no number three.” Even granting the skepticism which should be accorded any North Korean pronouncement, this contention makes sense. Unless Kim wants to share the fate of Muammar el-Qaddafi, the former needs to be convinced that the United States does not intend to use its military might if the North disarms.

How to do that? Demonstrate that relations are friendly. Engage one another and declare the war to be over. Such steps include a mix of self-evident (with combat over, replace the armistice), cheap (eliminate ban on travel both ways, encourage official meetings and private exchanges), and otherwise useful (establish diplomatic relations and a modest, to start, presence in Pyongyang). Doing so would fulfill the president’s commitment. It also would allow the U.S. to insist on movement on point number three, denuclearization.

The upcoming summit should become the catalyst for preliminary negotiations to set forth a number of specific steps for both sides to take that would ease the relationship and move down the path of denuclearization. In doing so, Washington should not let the perfect be the enemy of the good. That is, there are many important gains that the United States might make well short of denuclearization: making the missile/nuclear test freeze permanent, dismantling specific facilities, providing for even limited inspections, reducing the North’s conventional menace, and more. Such benefits should be pocketed while pressing for additional concessions. Thus, even if the pessimists (including me!) about full nuclear disarmament are proved correct, the peninsula still would be a more stable and peaceful place.

On foreign policy Trump has a penchant for doing the right thing in the wrong manner. That characterizes his approach to Kim Jong-un. Nevertheless, the president has created an unprecedented opening which offers the hope of ending the peculiar Korean cold war. If he tempers his expectations, the president might achieve much more.