Get Ready: Syria Will Need Peacekeepers 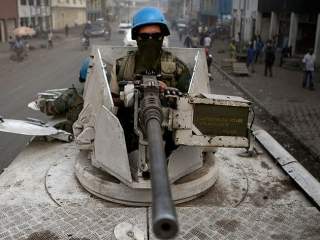 The most recent tragic attacks in Brussels as well as the thousands of Syrian immigrants that continue to arrive in Europe underscore the need for an improved strategy in Syria. Defeating ISIS in Syria is crucial to the broader struggle against this brutal group that still draws many recruits from a vague argument that it is somehow “winning” its broader fight against the West. Relying on Assad and Putin will not, of course, work. The recent success of the Syrian army in Palmyra, while not intrinsically unwelcome, could further inflame passions of Sunnis against a regime that most see as itself virtually genocidal, and wind up doing little net good.

One key to a serious Syria strategy is recognizing that an international peacekeeping force will almost surely be needed someday, in order to uphold any peace deal that eventually emerges. A demonstration of willingness to deploy such a force may, in fact, improve the chances of peace, while making the international community and the parties to the conflict more realistic about what kind of peace is possible—and what kinds of other steps, including greater Western military aid for the moderate opposition, will also be needed to effect peace.

Understanding how civil wars end and the factors that spark their recurrence is one of the bright spots of political science, an academic discipline often derided by policy practitioners as too arcane and abstract to be of much practical use. Happily, that is not the case for this subject. Employing a blend of methods—sophisticated statistical analyses of many past wars, case studies informed by field research, interaction with policymakers who wrestled with specific conflicts over the years—researchers including Nicholas Sambanis at Yale, Michael Doyle and Page Fortna at Columbia, Barbara Walter at the University of California at San Diego, Stephen Stedman at Stanford and a number of others have advanced our knowledge in ways that speak directly to the current situation with Syria. Yes, there are differences in their arguments, but there are also key common threads that can guide policymakers as they seek a way out of the current morass. Among the key insights are the following:

• Wars with high casualties, ethnic or sectarian components, and multiple actors are particularly hard to stop. Syria, of course, suffers from all three afflictions.

• Peacekeeping or peace enforcement tends to improve the odds that any agreement ending a war will survive. To the surprise of many researchers, including Paul Collier of Oxford, evidence strongly suggests that peacekeeping reduces the risk of countries backsliding into violence in post-conflict settings. Page Fortna of Columbia puts it thus: peacekeeping works.

• Peacekeeping forces are most often sent to the hardest wars—those where the risk of war recidivism is highest.

• Detailed peace agreements, with numerous stipulations that allow for confidence to be built up among various parties gradually and in step-by-step fashion, do better than simpler deals.

• UN or other peace operations deployed to a complex conflict zone to uphold a peace deal need multiple tools at their disposal: economic resources, strong political leadership, an ability to pressure recalcitrant parties to comply with earlier deals, and enough military force to protect themselves, providing a credible presence for monitoring a cease-fire and other stipulations of any accord, such as partial demobilization of combatant forces.

• Certainly, when it comes to the size of forces, evidence suggests that more is better. Fortunately, the literature also suggests that not every successful peace operation need have a huge force. The U.S. military favors muscular missions as a matter of doctrine, as attested by its counterinsurgency and stabilization manuals, written late in the Bush presidency. To be sure, there are good arguments in favor of raw strength. But the preferred U.S. method of deploying at least one peacekeeper for every fifty citizens of the country being stabilized, which in Syria would imply a force of at least four hundred thousand, is not essential in all cases and may not be politically practical for Syria.

• As such, a force in the range of thirty thousand to sixty thousand peacekeepers, empowered by firm rules of engagement, backed up by the right kind of strike force to deal with extremist spoilers, and reinforced by a modern command, control and logistics system, may have a good chance of success, especially if it is able to concentrate its main efforts in those parts of the country where conditions are most tense.

These basic tenets suggest at least a partial path forward for Syria. The writing is on the wall: we will almost surely need a peace operation, under the auspices either of the UN or NATO and the Arab League, if any ultimate deal is to succeed. All the variables present in Syria’s tangled conflict suggest that, however the war may end, it will reignite without a viable external entity. While a muscular force is ideal, a more modest one would still have solid odds of success, though it would need to be well protected and resourced, and be able to concentrate efforts in certain parts of the country.

The size of the force obviously depends on the nature and design of any potential settlement. These arguments may favor a confederal model for Syria with autonomous regions that largely police themselves in many parts of the country, allowing peace operations forces the ability to focus primarily on intermixed areas.

Furthermore, this means that whether or not the United States participates with its main infantry units in such a force, its logistics and command structures will be needed. And finally, since ISIS will likely remain a threat even after any deal, and since spoilers may try to disrupt any agreement, a strong counterterrorism capability of at least several thousand troops will be needed in the region over the longer term; that force will almost surely require U.S. backstopping and participation.

So we should brace ourselves. Syria need not be America's third big war of the twenty-first century in the Middle East; indeed, it should not be. But to have a chance of solving that acute threat to regional security—and to deprive ISIS of what is still its most compelling and important sanctuary in the world today—America needs a new strategy that includes willingness to contribute (in at least some capacity) to a substantial postwar military operation to stabilize the country. The sooner the United States says so, the sooner it can get serious about a broader strategy, and the sooner others will realize it and shape their own actions accordingly.

Michael O'Hanlon is a senior fellow and director of research in the foreign policy studies program at Brookings.

Sean M. Zeigler is an associate political scientist at the RAND Corporation.