Get Ready for a War Over the Nile River 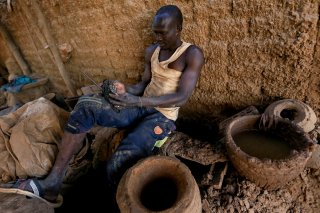 The Grand Ethiopian Renaissance Dam (GERD), which began construction in 2011, is nearing completion, including the filling of a reservoir necessary to provide water flow for an electrical power project. This development provides Ethiopia with major leverage over the countries downriver and could boost Addis Ababa’s power throughout Africa. The GERD also raises the delicate long-term issue of food security for Egypt and Sudan, two countries with large and growing populations that have long histories of drought, famine and flooding. Egypt regards the reservoir as threatening a reduced water flow at its end of the river, which constitutes a national security problem. Supporting Egypt is Sudan, which is where the Blue and White Niles converge and continue their voyage to the river’s delta in the Mediterranean Sea. Diplomacy thus far has failed to resolve the issue. The coming completion of the GERD and its reservoir is a game-changer for Africa and is likely to have long-term consequences for the region’s geopolitical and economic landscape.

The Nile River is the longest river in Africa, possibly the world. In Egypt, it plays an important role in providing water to drink and to irrigate crops as well as transportation. This is critical considering that agriculture accounts for 14 percent of GDP, remains the largest employer (over 31.2 percent of the total population), and consumes 80 percent of all freshwater. Indeed, Egypt’s identity is closely entwined with the river; around 97 percent of the population lives on 4 percent of Egypt’s total land area in the Nile Valley and Delta. The concern in Cairo is that any radical reduction of water flow over time could have major socio-economic consequences, especially during a period when the country is grappling with the ill-effects of the coronavirus and a global economic slowdown (which has hurt tourism, another key sector).

The GERD must also be considered in the context of Egypt’s environmental fragility. According to the World Bank, Egypt is one of the most vulnerable countries to climate change.  As the multilateral development bank observed: “Egypt’s Nile Delta and its coastal front on the Mediterranean are considered vulnerable to shoreline changes due to erosion and accretion, subsidence and sea-level rise due to climate change. Heavy rains often result in flash floods in Egypt.” The Egyptian government’s concern is that the Nile Delta is already struggling with a rising sea level; what happens if the flow of water in the Nile declines? Does the penetration of seawater into key agricultural land accelerate?

While in a historical sense it has been said that Egypt was the daughter of the Nile and that Sudan was her handmaid, the latter country is not a mere aqueduct between the uplands where the Blue and White Niles originate and the Egyptian border. With forty-six million people, Sudan is an important riparian proprietor. It needs a steady flow of water, considering its struggle to overhaul its economy and restore a degree of political stability. The country has experienced protracted social conflict, civil war, and, in July 2011, the loss of three-quarters of its oil production due to the secession of South Sudan. The oil sector had driven much of Sudan’s GDP growth since 1999. Without the oil sector, Sudan has been seeking to develop or improve other sectors, including agriculture.

Although it is less dependent on the Nile than Egypt, Sudan still needs the river as a source of water and transport. This is especially the case considering that Sudan is also regarded as one of the countries most vulnerable to climate change. Over the past ten years, it has hit repeatedly by floods and droughts, though its earlier problems have included extreme temperatures, epidemics and earthquakes. Consequently, any arrangements concerning the Nile deeply concern Sudan.

It will be difficult for Ethiopia to walk away from its position on filling up the reservoir. Much of this has to do with the country’s history from the 1970s to the present. Although Ethiopia was one of the few African countries to escape a lengthy colonial period, its postwar political life was thrown into considerable upheaval, beginning in 1974 when a Marxist revolution violently overthrew Emperor Haile Selassie. This was followed by the Qey Shibir (a Red Terror which killed an estimated fifty thousand people in 1976–1977), famines in the 1980s (which killed over one million people) and rebellions. The Marxist regime was finally brought to an end in 1991. Two years later, Ethiopia lost its coastline when Eritrea finally seceded, while its neighbor to the southeast, Somalia, fragmented in the aftermath of the Siad Barre dictatorship, with some regions giving birth to radical Islamic groups affiliated to al-Qaeda or the Islamic State.

Despite the loss of a coastline, the 1990s marked the beginning of an Ethiopian revival. As David Pilling, Africa editor for the Financial Times, noted: “For the past 20 years, its economy has grown annually at close to 10 percent. This has transformed what had been one of the world’s poorest states into a country with a fighting chance of reaching middle-income status by 2025, despite its own deep political instability. The mega-dam on the Blue Nile, financed by patriotic bonds, is a potent symbol of Ethiopia’s renaissance.”

The importance of the GERD is made all the more understandable by the World Bank assessment of Ethiopia’s environmental vulnerability: “Ethiopia has a high degree of risk to hydro-meteorological hazards and natural disasters. Vulnerability is exacerbated due to the country’s high level of poverty and its dependence on key sectors most likely affected by climate change: agriculture, water, tourism, and forestry. While the country is at high-risk to natural disasters such as flooding as well as drought, its topographic diversity and highly marginalized segments of the population, make it additionally vulnerable.” In this context, the GERD gives Ethiopia a badly needed infrastructure to deal with everything from increasing population to providing regular power generation.

One more factor at play is that Ethiopia’s political situation is fragile. Prime Minister Abiy Ahmed came into office two years ago, following a period of considerable political unrest. Elections were initially to be held in 2020, but have been delayed to 2021 due to the coronavirus. However, this has left the country’s politics on edge, a situation not helped by the recent shooting of a popular singer, which stirred up ethnic tensions. If Ahmed were to back down on filling the reservoir, then this could hurt his party’s chances at the ballot box.

Looking ahead, the GERD is likely to remain a major problem in Ethiopia’s relations with Egypt and Sudan.  While it would be a considerable challenge for Egypt and Ethiopia to conduct military operations against each other (Sudan cannot afford a war right now), they are likely to use external pressure from friends and allies. U.S. pressure has remained on Ethiopia to sign a water-sharing agreement to allay Egypt’s apprehension over the Nile. In turn, Washington is under pressure from Saudi Arabia to help Egypt. For its part, Ethiopia has played the United States against China, which has been a major investor in the East African country and is its major trade partner.

Egypt’s geopolitical position is complicated. While it remains strongly opposed to Ethiopia moving ahead with the filling of the reservoir, it faces pressures in Libya, which it shares a lengthy border. Libya’s political disorder has left the country open to the formation of radical Islamic groups, which the Egyptian government of President Abdel Fattah el-Sisi is strongly concerned about considering that it came to power in a coup against the Islamic party, Muslim Brotherhood, in 2013. Cairo is also concerned about Turkey’s intervention in Libya. Turkey is supporting the government in Tripoli, which is recognized by the United Nations, while Egypt, along with Russia and the United Arab Emirates, back a rival eastern government. Sisi in June indicated that Egypt might enter Libya if the Tripoli government and its Turkish allies renew an assault on the central Sirte-Jufrah frontline, which is regarded as a strategic gateway to the country’s main oil export terminals. Egyptian concern over Libya has no doubt been seen as a positive development for Ethiopia as North African geopolitics stand a greater chance of some type of armed conflict.

Ethiopia appears set on filling the reservoir, which is going to raise tensions and probably accelerate geopolitical jockeying by China, the United States, and Saudi Arabia as well as other countries seeking to gain influence in the Red Sea and the Horn of Africa, including Turkey and the United Arab Emirates. But this does little to resolve the issue. Ethiopia, Sudan and Egypt all face the same problems—large and growing populations, fragile economies and environmental vulnerabilities—which means all three countries need the river to flow. Unless there is some type of eventual agreement, the issue will increase regional tensions and sour relations between two of Africa’s largest states. It could also cause deeper environmental problems in a region with little margin for error.  A major reduction in the flow of Nile water could indeed lead to the issue of death on the Nile.