Get Ready World: China and Russia Are Getting Closer 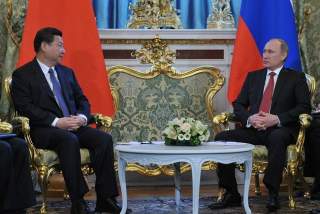 Whenever Russian president Vladimir Putin meets with his Chinese counterparts, there is always dramatic talk about the intensifying special relationship between the two countries and the enunciation of bold goals to double trade and further expand security, political and diplomatic ties. There is just as often a noticeable lag between the rhetoric of summits and what is actually achieved. Of course, both countries have moved closer together in recent years, but Moscow and Beijing have also traditionally hedged their relations with each other. China, of course, does not want to damage its much more lucrative ties with the West by joining Russia on a bold anti-Western crusade, while Russia is fearful of being drawn into the Chinese orbit and eventually reduced to the position of Beijing's junior partner.

Has the Ukraine crisis, however, changed the dynamic of the Sino-Russian relationship? If Russia's traditional "European vector" is now likely to be compromised—inhibiting further trade and investment—and if relations with the United States are more likely to be characterized by a "cold peace" rather than a reset for strategic partnership, is Putin now coming to Beijing as a supplicant, anxious to show that he is not isolated by Western pressure and has options? Or is he planning to offer the Chinese the vision of a new world order where the two great powers of Eurasia can, in concert, work to rewrite many of the rules of the international order laid down by the Euro-Atlantic world?

When president Xi Jinping welcomes Putin on his return to the Middle Kingdom this week, we will have a better idea as to how to answer these questions. In particular, outside observers should consider utilizing the following checklist:

1. Is the long-awaited Russia-China natural gas deal—ten years in the making—finally consummated on this trip? Tantalizing announcements continue to declare that the deal is nearly finalized and almost ready—but the sticking points remain price and quantity. If the deal is announced, pay close attention to the price. Is it a neat 50/50 compromise between Gazprom holding out for a near-European level price and China's wish to pay rock-bottom prices? Is China willing to give on price in order to lock in a longer-term guaranteed supply of gas? In particular, has Xi decided that it is worth it for China, as a sign of goodwill to Moscow, to pay a higher-than-preferred price for Russian gas—in order to significantly reorient Russian natural gas markets away from Europe—and to ease Russia into greater dependence on the Chinese market?

If the price is lower than what the Russians want, is this a sign that they are willing to give China the price breaks Beijing desired in order to get reassurances that Beijing will be a long-term consumer—or because China has decided, in return for a lower price, to finance much of the new investment needed to modernize the Russian energy industry? Just as important, does Putin sign a contract with China that may be disadvantageous to Russia because of an assessment that European markets will continue to diminish as the West finds other alternatives to Russia?

Thus, a delay in announcing a final gas deal may suggest that Russia is not yet willing to completely foreclose on its European markets—and that Gazprom believes that the present day uncertainty over Ukraine is but a blip that will pass in time—and thus Russia should not agree to fire sale prices on its gas to China.

2. Beijing has not been particularly thrilled by Russia's decision to annex Crimea, but its criticisms have been muted. The real test, however, is whether Xi signals that China is willing to continue with the extensive plans it had for developing port and transport facilities on the peninsula as part of its own Silk Road Strategy—and as outlined in agreements signed with the ousted Ukrainian president Viktor Yanukovych. Are Chinese state companies planning to continue those efforts—and is Moscow agreeable to a stronger Chinese commercial presence in Crimea?

China has also been cultivating strong links with Ukrainian agribusinesses, and has increased its food imports from Ukraine. Certainly, Beijing will want reassurances that its investments in Ukraine are not imperiled by Russian action—and that Ukraine's ability to ship goods to China via Russian transport routes is not jeopardized.

3. Both China and Russia have made strong noises about wanting to diminish the use of the U.S. dollar and their dependence on the greenback as a means of exchange and settlement. China would be happy to pay Russia in yuan for raw materials, while Russia has mulled requiring payment for exports in rubles. However, Russian economists remember the Cold War era well and the limited utility of the Soviet transfer ruble as well as related mechanisms for accepting payment in Indian rupees—holding currencies that could only be used in certain markets and were not transferrable elsewhere. Certainly some of the income that Russia receives from energy sales to China would be recycled back to Beijing to pay for goods and services—but Russian companies want to be able to also use their proceeds to buy things from Western firms that will probably not want yuan. But China is not going to want to let the yuan float freely against the ruble. So can the two presidents make progress on creating a durable exchange-rate mechanism and clearinghouse for payments that would allow both of them to move beyond using the dollar?

4. During the course of the visit, the Chinese and Russian navies will hold joint maneuvers, accelerating the trend of the last decade for both countries to hold significant military exercises. But China has decreased its purchases of Russian weaponry while Russian defense industries are loath to sell their most advanced designs to China for fear of Chinese reverse engineering (and subsequent competition from Chinese firms offering Russian knockoffs at lower prices). Will this change after this summit? Is the result of the Ukrainian crisis a shift in Moscow's threat perception, away from the long-term challenge a rising China poses to the short-term horizon of a return to strategic competition with the West in Eastern Europe and western Eurasia? Does reinforcing Chinese capabilities to challenge U.S. technological advantages allow Moscow to redirect U.S. attention and resources away from Europe towards the Pacific basin—a continuation of the same strategy the USSR pursued in redirecting Japan, prior to World War II, away from Siberia as a target for acquisitions towards the wider Pacific basin? Whether any new significant weapons deals (or agreements to pursue joint development) are broached in the coming months after the summit may provide some answers.

A final related question: Putin travels to China in the wake of Narendra Modi's massive victory. Modi may be more amenable to Putin's vision of world order—and the Chinese will be curious to learn whether or not the new government is more likely to cut a deal with Beijing that reduces strategic competition between New Delhi and Beijing and makes it less likely that India will become an anchor for the U.S. "pivot to Asia." If Russia and China are confident they can continue to build on their strategic partnership, can Xi and Putin do more to pull Modi closer into their camp and away from the West?

Putin, before leaving for Shanghai, declared, "Russia-China cooperation is advancing to a new stage of comprehensive partnership and strategic interaction. It would not be wrong to say that it has reached the highest level in all its centuries-long history." The outcome of the Xi-Putin meeting will demonstrate whether the limits have been reached.