Get Ready, World: Ukraine Is Being Torn to Shreds 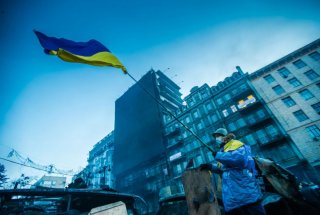 The results from the Ukrainian parliamentary elections on October 26, which saw nearly three quarters of the seats go to ostensibly pro-European parties, was the cause of much rejoicing among America’s stalwart Euro-Maidan enthusiasts. According to a National Review editorial, “it will be hard for ‘realist’ commentators to spin the results of Ukraine’s parliamentary elections as another triumph for the bare-chested Machiavellian Vladimir Putin.” And indeed it would, in the rather unlikely event any realists were interested in so doing; for realists, however, facts and honest analysis will suffice.

It is no doubt true that the pro-European parties walked away with a convincing plurality and, according to NR, “a pro-Russian opposition bloc, including politicians from the former Regions party . . . won less than 8 percent of the vote.” A further bonus: “Communists won’t be in the next parliament at all.” Left unmentioned by Lexington Avenue’s new generation of cold warriors was that in the run-up to the election, members of the Ukrainian opposition parties faced serial incidents of violence and intimidation by Ukraine’s putative standard bearers of Western values.

Nevertheless, the view of the Washington establishment was reliably reflected by a Foreign Policy headline that flatly declared: “Ukraine Wins.” And apparently, much like at NR, the specter of Communism still haunts the halls of FP, which dutifully informed readers that “The election was historic for several reasons, not the least of which is that it will be the first Ukrainian parliament since the Bolshevik Revolution that doesn't include the Communist Party.”

And yet, despite the long-delayed defeat of those insidious Ukrainian Reds, the rejoicing may be premature for two reasons, the first having to do with the other story the election results tell. Far from showing a united Ukraine, the results show a deepening of the divisions between the pro-EU West and the rather more skeptical populations of the country’s south and east. The turnout helps tell the tale. Nationally, turnout was just over 52 percent, yet on average, tracked lower in both the southeastern oblasts and in two western oblasts with significant populations of ethnic Romanians and Hungarians. The turnout in the northwestern oblasts, the primary base of support for Prime Minister Yatsenyuk’s People’s Front, was significantly higher, reaching 70 percent in Lviv.

A second reason the October 26 results should be viewed with a healthy dose of caution is that the party more disposed to pursue a peaceable policy with regard to the breakaway regions—President Petro Poroshenko’s eponymously named Poroshenko Bloc—did rather less well than had been expected, coming in a close second to the People’s Front. While it is true Poroshenko quickly pledged his party’s support for Yatsenyuk to remain in his post as prime minister, the maneuvering between the rival Yatsenyuk and Poroshenko factions echo the unhappily arranged marriage between Viktor Yushchenko and Yulia Tymoshenko in the aftermath of the Orange Revolution in 2004-05. We have, I’m afraid, seen this movie before.

The contest, then, could reasonably be characterized as a contest won by the war hawks, led by Yatsenyuk, over the doves, led by Poroshenko. Little noted in Western media is the true extent of Yatsenyuk’s anti-Russian hawkishness. According to the University of Michigan’s Pietro Shakarian, “Yatsenyuk’s main pet project has been the construction of a large Berlin Wall-style rampart along the entire Russo-Ukrainian border.” And so while it is true that pro-EU parties did resoundingly well, what is also true is that the elections show a hardening and deepening of the divisions within Ukraine.

Making a bad situation worse, the self-proclaimed People’s Republics of Luhansk and Donetsk held their own set of parliamentary and presidential elections this past Sunday. European leaders were quick to condemn the elections as a violation of both the September 5 Minsk ceasefire agreement and the Ukrainian constitution. Russia, worryingly, though not surprisingly, has recognized the results. The ramifications of the two elections—one legitimate, one not—are clear.  The partition of Ukraine is now—barring the extraordinarily unlikely event of a full-scale military intervention by the West—an established fact that will not be undone for the foreseeable future.

Meanwhile—the bills for Kiev’s “European choice” are coming due. On October 24, a deal was reached between Russia and Ukraine over the supply of gas for the coming winter. Responding to news of the deal, the Carnegie Endowment’s Dmitri Trenin tweeted: “EU-Ukraine-Russia deal formula: Ukraine gets gas, Europe gets Ukraine (to support), and Russia gets money.” What Mr. Trenin should have added was “. . . from the American taxpayer,” because that is exactly what is about to happen. The deal stipulates that Ukraine will pay Russia $1.45 billion immediately to settle its outstanding gas bill, and will make an additional payment of $1.65 billion by year’s end. According to EU Energy Commissioner Gunther Oettinger, who helped broker the deal, the money will come courtesy of the IMF (read: the American taxpayer) and European Union.

And then there is the even more complicated, to say nothing of expensive, issue of Ukraine’s sovereign debt. Interestingly, the Ukraine crisis has managed to align the “conservatives” at National Review with a longtime bête noir of the American right, George Soros. In a much-discussed essay to be published in the November 20 issue of the New York Review of Books, Mr. Soros, revealing himself to be equal parts Russophobe and plutocrat, urged the United States and the EU to, in effect, bailout holders of Ukrainian sovereign debt. According to Soros, large private holders of Ukrainian debt, like Franklin Templeton—which holds roughly $7 billion of it—should not “have to take losses on their investments as a precondition for further official assistance to Ukraine.”

Soros says the IMF should “provide an immediate cash injection of at least $20 billion, with a promise of more when needed.” Further, the assistance package should be accompanied by a debt exchange through which Ukraine’s $18 billion Eurobond debt would be “transformed” into less-risky, long-term bonds which “would be guaranteed—but only partially—by the U.S. or Europe.” One benefit to such a scheme—left unmentioned by Soros—would be to shield current holders of Ukrainian debt from the consequences of their decisions. So much for moral hazard.

Of course there’s a certain irony to Soros acting as a defender of the established order in Europe, after all, as a respected fixed-income analyst tells TNI, “you might argue that Soros has done more to destabilize fragile EU financial markets with speculation than he can claim to support them with political action.”

In any event, it bears repeating that all of this: the partition of a modern European state, the billions of dollars that American and European taxpayers are now on the hook for, the thousands of war dead and nearly one million refugees could and should have been avoided, but for stupendously unwise European and American diplomacy. As Vladimir Putin (no innocent bystander in all of this, to be sure) noted in his recent speech to the Valdai Club, in the run-up to last November’s Vilnius summit, at which Ukraine was to sign the EU Association Agreement:

Nobody wanted to listen to us and nobody wanted to talk. They simply told us: this is none of your business, point, end of discussion. Instead of a comprehensive but—I stress—civilized dialogue, it all came down to a government overthrow; they plunged the country into chaos, into economic and social collapse, into a civil war with enormous casualties. Why?

We may not like the “bare-chested Machiavellian,” but there is something to his version of events; too bad that at this point, neither the West, nor Russia manifests much of a willingness to hear the other out.