Get Real or Get Outpaced: Reality and the Future of U.S. Navy 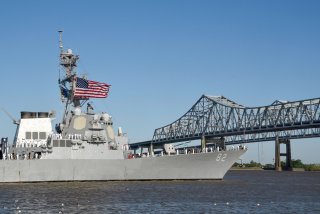 If domestic pressure is not enough, then the Department of Defense should consider joint production instead of merely joint development with partner nations. Allies such as Japan, the Republic of Korea, Italy, France, the United Kingdom, and Spain possess proven designs and capable production facilities and capacity well beyond that of the United States. The joint production of specialized platforms would also provide a more comprehensive network of available repair facilities, replacement parts, and technical expertise for onboard tech assists when issues go beyond the ship's force. Increasing such an economy of scale would likely drive down cost per unit due to more significant buys of hulls and parts. Finally, this would foster competition in the shipbuilding industry and motivate it to continuously reinvest in its infrastructure and improve its efficiency and proficiency at building and repairing ships or risk losing future contracts or facing potential financial penalties.

Small Steps as Part of a Longer Journey

Changes such as the above do not provide an immediate or complete fix to the realities and challenges that face the fleet. However, they are steps in a direction that should be explored. The facts of failed modernization will have far-reaching consequences that will eventually come. We must get honest about these, shift our platform, and force a new design mindset. We must get real about the systemic issues plaguing the capacity and the effectiveness of the United States industrial base. China is the pacing threat, and the United States is in danger of falling (further) behind. Still, we must change our approach to regain our pace and maintain an advantage in strategic competition. What we have been doing, particularly in naval shipbuilding and platform design, has not been working. We must focus on attainable goals, proof of concepts, successful employment, and then spiral development to provide a force capable of winning the nation's wars. That might also mean a reduced focus on deterring aggression, as reality dictates that force designs might not always be able to deliver both. It is time to establish an enduring maritime strategy and force design, acknowledge the collective shortcomings of all stakeholders, and embrace the change needed to succeed in a changing world. That is how we truly get real and get better.

Commander Mike Knickerbocker is a Surface Warfare Officer and Federal Executive Fellow for the Clements Center on National Security at the University of Texas at Austin. He has written on matters relating to national security for the Center for International Maritime Security and the Defense Post. He previously served as a member of the shipyard modernization team for the USS Gerald R. Ford.

The opinions reflected in this article are those of the author. They do not represent the official policy of the Department of Defense, Department of the Navy, Clements Center, or the University of Texas.