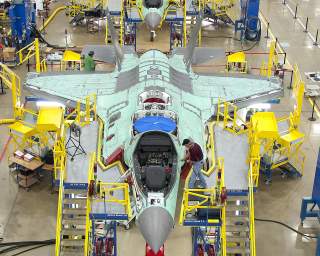 In today’s changing geopolitical environment, concerns in Washington that the United States is falling behind in critical emerging technologies are commonplace. China and Russia—both identified as great-power competitors of the United States by the current administration—are forging forward with critical investments in technologies ranging from quantum computing to artificial intelligence.

But the United States is still by far the most innovative nation on earth. America’s strengths run from its fundamental pull to brilliant minds the world over through its relatively open immigration system to the unparalleled resources of its universities. The free-market structure of the economy, vibrant venture capital ecosystems, world-class universities, and government support of R&D combine to form the most innovative ecosystem in the world.

However, when it comes to defense and positioning for future competition with Beijing and Moscow, the government has not figured out how to tap this flow of innovation emanating from the civilian sector.

Commercial firms that do little business with the U.S. Department of Defense have much to offer in the way of expertise, but often have little idea where to start when it comes to the byzantine acquisitions process that longstanding defense industry stalwarts have grown accustomed to navigating.

There’s already some awareness of this among the community of China-watchers in Washington, many of whom have watched China pursue its strategy of “military-civil fusion”—a top-down, stage-managed marriage between the country’s fast-growing and increasingly innovative technology sector and the Communist Party-led government.

The United States isn’t China—and it shouldn’t be. A top-down, government-managed effort to wring out every last drop of innovation in Silicon Valley is anathema to American values and to the rugged, do-it-yourself spirit of free enterprise that has been the engine of American innovation. The challenge is not how to improve innovation, but rather, how to facilitate innovation finding its way into applications in defense—as needed?

Promoting private-public partnerships in defense must begin by reducing the transaction costs of doing business with the U.S. government and making the acquisition process easy to navigate. For smaller commercial players in particular, many of whom are at the cutting edge of innovation in a range of critical technologies, the prospect of doing business with the federal government—the Department of Defense, in particular—can be daunting.

The prescription for the current predicament in the Department of Defense’s procurement system should not be to throw away all that is currently in place; for instance, the Federal Acquisition Regulation, for better or worse, codifies the current operation of the acquisition machinery. Without it, the acquisition workforce in the Pentagon would need to start from scratch—creating more inefficiencies, sowing process confusion, and proving a nightmare for promoting private-public partnerships.

Rather, the onus going forward should be to stay the expansion of unnecessary bureaucratic red tape that—even if well-intentioned—will serve as a deterrent to firms seeking to enter the defense space. Congress could lead by example here, by holding the line and choosing not to add substantial acquisition legislation in the next National Defense Authorization Act. American commercial firms working at the cutting edge of emerging technologies need to see that the barriers-to-entry are reasonable when approaching the U.S. government.

At some level, the Department of Defense has recognized this. Former Secretary of Defense Ash Carter, for instance, took an interest in actively merging the worlds of American high-tech innovation and defense; the Defense Innovation Unit, launched in 2015 and headquartered in the heart of Silicon Valley, was tasked with tearing down unnecessary barriers to entry and streamlining the U.S. military’s adoption of innovation in critical technologies.

This strategy correctly recognizes that the problem is not just about finding sources of critical advances in unusual places. The problem is that many of the technological advances are discovered by companies that are, in their essence, profit-seeking enterprises. These enterprises are put off by the defense acquisition’s excessive regulatory environment. The answer then is to remove unnecessary layers of regulations to attract companies to the defense innovation and industrial base.

One of the salutary effects of a moderate regulatory environment for new entrants will be to allow for the organic emergence of a greater degree of comfort and cultural understanding between Silicon Valley and the Pentagon. Such an understanding of national security issues will be increasingly necessary for the civilian technology sector if the United States is to effectively maximize its competitive potential. This is clearly still a barrier; even a giant like Google found thousands of its employees opposed to collaborating with the U.S. military on artificial intelligence via “Project Maven.”

The blowback within Google over Project Maven—a contract that would have seen Google engineering expertise in computer vision toward the analysis of surveillance imagery collected unmanned aerial vehicles—may occur elsewhere, but it’s revelatory of just how large the gap between the tech and defense sectors has gotten.

Even American progressives, who may see little reason to relax regulatory burdens, should give this issue a second thought. Recent years have shown that China, for instance, gives little thought to happily proliferating its advanced technology in areas ranging from facial recognition to offensive weaponry to a range of countries.

If the United States is unable to maintain leadership in critical emerging technologies, then not only are Beijing’s clients unlikely to give up their interest in the technologies that might underpin their own twenty-first-century authoritarian aspirations but Washington’s own ability to credibly offer an alternative—or to push back on China—will be compromised as well.

There’s little doubt that Washington wants to compete, but the competition—especially technological competition—requires a reckoning with processes. Streamlining incentives for civilian commercial firms that find themselves traditionally far from the Pentagon to swing inwards should be a top priority.

The U.S. government and the Department of Defense have long excelled at managing top-down innovation—as the story of so many twentieth-century technologies, including the internet itself, makes clear. To be successful in the next century, the government needs to learn how to excel at managing innovation from the bottom—where the innovation is happening—up.

Ankit Panda is an adjunct senior fellow in the Defense Posture Project at the Federation of American Scientists, where he works on defense technologies and security issues. Follow him on Twitter at @nktpnd.