Getting Freedom of Navigation Operations Right in the South China Sea 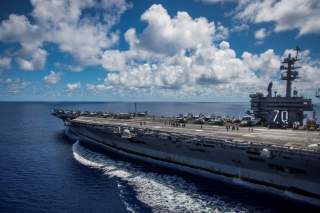 There is a growing consensus among experts that freedom of navigation operations (FONOPs) are necessary but insufficient to safeguard U.S. interests in the South China Sea. In recent years, China has built artificial islands and military installations in the region and has pursued its maritime claims with more voracity. In response, the United States has sailed warships near land features claimed by China to ensure that the surrounding waters remain open in accordance with the law of the sea. These operations are neither designed to roll-back Chinese construction activities nor arbitrate territorial disputes in the South China Sea; instead, they are meant to preserve the navigational rights of all countries, and they have been conducted by the United States around the globe since 1979. Experts have thus recommended a variety of additional policies that the United States should adopt to address Chinese advances in the region, such as strengthening ties with local allies.

Yet FONOPs remain the poster child of U.S.-China competition in the South China Sea, and inadequate attention has been given to the need to better align public expectations with the limited but important goals that these operations are meant to achieve. Despite concerns that China will use their artificial land features to assert ownership of the surrounding seas, FONOPs have rarely been used to challenge territorial sea claims in the region, even when U.S. warships sail within twelve nautical miles (the maximum outer limit of a territorial sea) of these land features. For the public to understand this logic, and to deflate unnecessary expectations of FONOPs, officials and media reports must provide more clarity and information about the operations when these operations are made public. Failure to do so not only promotes an overblown image of FONOPS, but it perpetuates incentives to avoid more vigorously addressing Chinese advances in the region and sets up the stage for the operations to appear as failing in their mission.

One detail that is often missing from media reporting on FONOPs is “innocent passage.” According to the UN Convention on the Law of the Sea, innocent passage is a right that foreign ships have to sail within another country’s territorial sea as long as they traverse the zone in a swift and direct manner without conducting any prohibited activities, such as military exercises and surveillance.

Many experts, including U.S. officials and analysts, are familiar with this legal subtlety, but it is inadequately identified in the public eye. For example, in a controversial case in 2015, the United States conducted an innocent passage while transiting within twelve nautical miles of Subi Reef—an artificial land feature controlled by China in the South China Sea. This operation, therefore, did not challenge territorial sea claims around that feature. Then U.S. Secretary of Defense, Ashton Carter, later justified the U.S. action in a letter that clarified that Subi Reef is close enough to a larger land feature that may entitle Subi Reef to a territorial sea.

Moreover, the annual FONOP reports by the U.S. Department of Defense reveal that most operations that were conducted within twelve nautical miles of Chinese-controlled land features in the South China Sea were innocent passages. In these cases, U.S. Navy ships, therefore, did not challenge territorial sea claims, but many official statements and media reports are not crystal clear on this point.

To be sure, innocent passage can achieve important limited objectives. For instance, it can challenge countries—such as China—that ask foreign military vessels for “prior permission” to transit their territorial sea. The United States views such requests as inconsistent with international law and conducts innocent passage within twelve nautical miles of Chinese-controlled land features without asking for prior permission. In this way, innocent passage plays an integral role in the broader U.S. strategy to maintain freedom of navigation.

Nevertheless, since conducting innocent passage does not challenge territorial sea claims—let alone the build-up of artificial islands and military installations—the lack of attention to such detail can raise false hopes about FONOPs among the public.

There are at least two dangers of such inflated expectations. First, by making the operations appear tougher than they are, it makes it more difficult to address ongoing regional challenges. The increasing militarization of artificial land features and “gray-zone” advances by China are among the many challenges that require hard decisions, not hype.

Second, it sets up the stage for FONOPs to appear as failing to counter the Chinese. For instance, the U.S. public may mistakenly come to believe that China’s continued island-building and advances in the region are a failure of FONOPs. This eventual public disenchantment may prompt new U.S. policies in the region but at the cost of delaying until the challenges have become greater. By deflating unrealistic expectations now, officials can preempt such a public disenchantment with FONOPs and proactively address the challenges in the region as they arise today.

However, official statements are often ambiguous and media reports rarely attempt to unpack the legal justifications that are offered in such statements. For instance, officials frequently refer to challenging “excessive maritime claims,” but this expression is so broad that it often obscures how limited the challenges are. Even when operations are conducted within twelve nautical miles of land features in the South China Sea, in some cases, challenging “excessive maritime claims” can mean to protest against a prior permission requirement (by conducting innocent passage), yet in other cases, it could mean to challenge an unlawful territorial sea claim. Media reports, however, do not always clarify which excessive claims the official statements refer to and instead quote the justifications verbatim.

At other times, official statements are more transparent. In May 2017, U.S. officials revealed that a FONOP was conducted during a military “maneuvering drill” known as a “man overboard” exercise when sailing within twelve nautical miles of Mischief Reef—an artificial land feature under Chinese control in the South China Sea. This level of information obviates the possibility that the operation was an innocent passage, and U.S. officials unequivocally stated at the time that “[t]he ship’s actions demonstrated that Mischief Reef is not entitled to its own territorial sea.” This demonstrates that sufficient details about the scope of the operations can be provided by official statements without divulging classified information. Moreover, it shows that even small additional details can be provided to help deflate unnecessary public expectations of the operations.

We thus argue that U.S. officials must proactively provide more clarity and information about the operations when those operations are made public. Similarly, media reporting on FONOPs must decipher the legal lingo of official statements.

To the credit of U.S. officials involved in FONOPs, in recent years, they have more frequently emphasized the routine nature of the operations and have provided more specifics about the objectives of each operation in the South China Sea.

Yet, the information we have is not enough. The law of the sea remains elusive to many, and when territorial seas—or the build-up of artificial islands or military installations—are not being challenged, that should be made clear. Although the operations need not be publicized as they are conducted, if they are, they should be accompanied with the requisite details to accurately convey the scope of the challenge.

FONOPs play an integral role in the broader U.S. strategy in the South China Sea, but they should be appraised for the limited but important goals they are meant to achieve.

Hyun-Binn Cho is a Stanton Nuclear Security Postdoctoral Fellow at the Center for International Security and Cooperation (CISAC) at Stanford University. His book project explains the dangers of provocation in foreign policy crises, with a focus on the Asia-Pacific.

Umut Yüksel is a Ph.D. candidate in International Relations at the Graduate Institute, Geneva. He is currently a visiting researcher at Stanford University. His research examines the drawing of maritime boundaries in the aftermath of the Second World War, paying special attention to the impact of legal uncertainty on state policies and interactions.