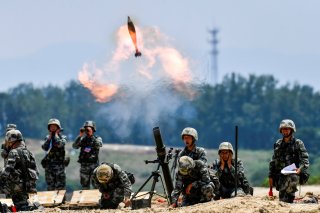 In a decade or so, we’ll have all the answers. Either this will be recognized as the latest age of the great American strategists following in the footsteps of Alfred Thayer Mahan and George Kennan—or we will all be speaking Chinese and bowing to the West.

America is in an era of great-power competition where there is a real possibility that we won’t come out on top or continue to be able to serve as the world’s safety patrol, the guarantor that conflict and confrontation won’t spin out of control. The United States will prevail only by making better hard choices than its enemies will, and sticking to them over time.

That combination of acumen and will is the essence of strategy—and good strategy has to start with strategists. If America doesn’t find that guiding lifeline of an idea, then it will remain hamstrung in the global competition.

What is probably already apparent is that the current administration won’t deliver the next Clausewitz. Even before the Biden team published its national security and national defense strategies, it was abundantly clear that all this administration has in the brain bank is stale, recycled ideas from the Obama administration that have already been tested and failed.

President Joe Biden will likely do exactly what Barack Obama did. After his ideas fail to deliver in practice, he’ll come up with a variety of ad-hoc responses, hoping it’s enough to get him through the next election.

More likely, the next big idea will come from something outside what is blessed by the West Wing and be implemented by leaders other than those currently in office. One aspirant of fresh thinking is The Strategy of Denial: American Defense in an Age of Great Power Competition, by former Trump defense official and scholar Eldridge “Bridge” Colby. This is a book well worth reading, packed with fresh paradigm-cracking ideas, breaking all the china in thinking how to handle China.

Make no mistake: the foundation of American grand strategy, Colby argues, is putting Beijing in its place. That reflects a general strategic consensus among U.S. candidates for the next great strategists. Colby, however, argues that dealing with China is not just the most important thing. He pretty much argues it’s the only thing that matters.

In crafting a strategy for China, Colby offers more than the stale “pivot to Asia” and “compete where we must, but cooperate where we can” approach concocted by Obama and recycled by the Biden boys and girls.

For starters, “pivot to Asia” was never a real plan to begin with. The Obama team was just looking for a hook to argue that it wasn’t abandoning foreign policy as they rapidly sought to disengage from the Middle East. China was the new thing. Obama wanted to look like he was dealing with Beijing—without antagonizing Beijing too much. Biden looks to be doing much the same.

Colby calls for a more proactive, forceful, and deliberate strategy. He argues that America must stop the rise of China in its tracks. He recommends focusing on a core objective: denying any other state hegemony over one of the world’s key regions in order to preserve Americans’ security, freedom and prosperity.

Colby also argues “the structure of global power has changed.” The United States lacks overwhelming advantages and will have to compromise in virtually every theater to focus the overwhelming bulk of its hard power in Asia against China. In short, the United States has to establish “military dominance” in the Indo-Pacific region.

The bulk of The Strategy of Denial focuses on developing military strategies that will checkmate China, from Taiwan to the Philippines and other key potential flashpoints in the theater. The core of Colby’s approach is to focus on defeating “China’s best military strategies rather than simply pleading ignorance and preparing for all eventualities or focusing on China’s likeliest or most destructive potential strategies.”

In the end, Colby’s call is for a strategy that will forcibly deny Beijing its hegemonic design. If done forcefully, swiftly and well, he contends that, rather than fighting wars, the United States will be able to achieve a “decent peace and acceptable détente.”

There is a lot of hard thinking here that deserves a hearing. Colby offers a powerful rebuke and a clear alternative to arguments that retrenchment, disengagement, appeasement or even the ambivalent mediocre status quo are adequate to protect U.S. interests.

There is a debate to be had whether the United States can pretty much denude all its other alliances and security obligations to focus on the Indo-Pacific theater and not create as many problems as it solves. But at least Colby is facing the hard question at hand squarely. China is a country that can be checked only with hard power. Where is the United States going to find the resources and the will to get the job done?