Getting It Right: The U.S.-Japan Alliance 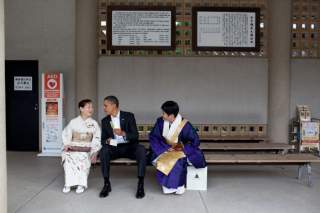 As President Obama kicks off his Asia trip this week with a visit to Japan he will likely discuss with Prime Minister Shinzo Abe ways to modernize the U.S.-Japan alliance and maintain its role as a vital cog in Washington’s rebalancing strategy. Obama and Abe will also try and overcome the remaining hurdles—largely focused on U.S.-Japan tariff and nontariff barriers—to a successful conclusion of the Trans-Pacific Partnership (TPP). A renovated security alliance, wedded with enhanced economic integration via the TPP, represents the pillars on which Washington and Tokyo will base their future partnership. Indeed, Daniel Russel, U.S. Assistant Secretary of State of East Asia, recently referred to the alliance as the “cornerstone” to peace and prosperity in the region.

In many respects, the U.S.-Japan alliance has never been in a stronger position, as Japan under Abe has shed years of political futility highlighted by its “twisted diet”. Abe has also exorcised some of the demons from the Democratic Party of Japan (DPJ) years and spent the necessary political capital to finally resolve the delicate issue of a replacement facility for U.S. marines based in Futenma, Okinawa. The Abe 2.0 administration has also taken politically risky gambles on the economy and in the political-security realm through a suite of economic reforms and a retrofit of Japan’s antiquated national security infrastructure. Washington has long desired all of these reforms.

These reforms and their relevance to the U.S.-Japan alliance, especially in light of the revision of bilateral defense guidelines currently underway, will form a solid foundation for discussion between Obama and Abe. But, while maintaining these pistons in the alliance is significant, it would be a mistake for Obama’s trip to narrowly focus on the logistical challenges and opportunities of the alliance and sidestep the gradual trust deficit that is growing at the leadership level. This trip to Japan needs to have a strong focus on building the personal rapport between Abe and Obama, whose relationship does not match the warmth and depth of those at the working levels in Tokyo and Washington.

The relationship between Obama and Abe started out well after the latter’s stunning political comeback cemented by his electoral victory in December 2012. Abe came out of the gate with purpose and arrived in Washington two months later declaring that, “Japan is back”, and supported his assertion with an announcement of his bold policy of “Abenomics” and decision to enter into TPP negotiations. Moreover, despite some harsh campaign rhetoric, Abe remained largely pragmatic with regard to Japan’s territorial disputes with its neighbors and resisted the temptation to break this patience with regard to China’s sustained intrusions into Japanese territory in the East China Sea. These developments, along with the more logistical reforms discussed above, provided a fertile environment for a strong rapport between Abe and Obama.

Unfortunately, domestic horse-trading in Japan and geopolitical uncertainties in East Asia have resulted in a number of incidents that have eroded this trust. Where did things go astray? The first hiccup in relations came as a result of Abe’s originally vague remarks on whether his government would standby the Kono and Murayama statements, which serve as landmark expressions of Japan’s contrition for crimes it committed before and during World War II (Abe has since publicly reaffirmed Japan’s support for both statements). Adding fuel to this fire were comments made last spring by Osaka Mayor Toru Hashimoto who seemingly appeared to justify Japan’s use of “comfort women” during the war: “When soldiers are risking their lives by running through storms of bullets, and you want to give these emotionally charged soldiers a rest somewhere, it’s clear that you need a comfort-women system.”

Hashimoto further inflamed the situation by making a broken analogy, saying a larger sex industry was needed in Okinawa in order to deter further incidents of sexual violence by U.S. marines stationed there. These remarks were not only harmful to Japanese-Korean ties, but they also gained attention in the White House and caused a minor setback in Tokyo’s ties with Washington, which had been blossoming under the return of the Liberal Democratic Party. The “comfort women” issue remains problematic for the United States on two fronts: first, on a moral level, as the issue provoked a strong stance from former Secretary of State Hillary Clinton and some attention in Congress; and second, on a strategic level, as the lingering issue has been one of the factors stifling much-needed trilateral cooperation between the United States, Japan and South Korea.

But, while the Hashimoto gaffe was quickly resolved, the sting of Abe’s visit to Yasukuni shrine this past December remains. Abe’s decision to go to Yasukuni lifted a seven-year, self-imposed moratorium in which Japanese leaders avoided the shrine in order to prevent deteriorating ties with China and South Korea. Before last December’s visit, Abe had repeatedly stressed his failure to go to the shrine during his first premiership in 2006 as one of his deepest regrets. Up until that point however, Abe also had been opaque when answering questions from the press about a potential visit to Yasukuni. Moreover, it seems that U.S. Vice President Joe Biden was angered by the visit as he spent hours trying to secure a commitment from Abe to refrain from going to the shrine.

Despite its unhappiness with Abe’s decision, the United States had a measured reaction to Abe’s visit through its Embassy in Tokyo, expressing “disappointment that Japan's leadership has taken an action that will exacerbate tensions with Japan's neighbors.” On the surface, Washington’s statement was a calibrated public criticism of Abe’s decision. In reality, however, this belied a more frustrated sentiment in the White House that felt let down by Abe’s move. As Sheila Smith, Japan scholar at the Council on Foreign Relations, noted: “The U.S.-Japan alliance remains a powerful tool for Prime Minister Abe, but the alliance cannot thrive in a state of uncertainty or frustration. On this side of the Pacific, of course, there will also be frustration about the deliberate decision to ignore U.S. concerns.”

And this gradual widening between Abe and Obama also resulted in some failed messaging from Washington. One of the most acute examples of this was the U.S. acceptance of the term “great-power relationship” to reflect its ties with Beijing. The move, which came out of the Obama-Xi summit at Sunnylands, resulted in bewilderment in Japan, among other places in Asia, and has contributed to fears that the Obama administration may acquiesce to China’s salami-slicing tactics in the East China Sea. While the United States insists that its interpretation of the “great power relations” is different than that of Beijing, the perception in Tokyo remains that this was a critical mistake. These cracks were heightened once again when the United States and Japan appeared out of sync with regard to the compliance of their commercial airliners to China’s unilateral imposition of an Air Defense Identification Zone in the East China Sea last November.

Admittedly, all international relationships, even those between allies, have weak spots. The U.S.-Japan alliance is no exception. Therefore, it is not necessary for Obama and Abe to pose for a photograph outside a thatched house in Shirakawa-go. The two need not replicate the Graceland Summit between their predecessors. But, while the two may not become confidants, it is important for planners on both sides to carve out a significant portion of the two-day schedule to give Abe and Obama the chance to develop a personal relationship that will be integral to weathering future challenges to the alliance.