Getting out of Afghanistan, with Russia’s Help 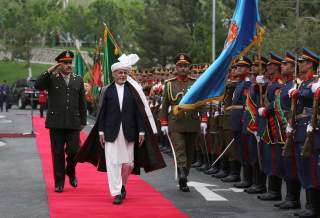 To say that the United States and Russia find themselves on opposite sides of some of the world’s most significant disputes would be a vast understatement. From Syria’s civil war and Ukraine’s internal conflict to arms control and election interference, the modus vivendi between Washington and Moscow can often seem destined for eternal damnation. U.S.-Russia relations may very well be at their lowest point since the U.S. and Soviet missile buildup of the early 1980s.

The endless war in Afghanistan, however, has the potential to bring the two rivals together.

While U.S. and Russian national security interests in the violence-plagued Central Asian state certainly aren’t identical, both countries share the objective of ensuring Afghanistan does not descend into a terrorist playground that presents a long-term threat to its own people. Both appear to be cognizant that diplomacy amongst the Afghans themselves is the only way to achieve this goal. A continuation of the war is not only a detriment to a country that has seen four consecutive decades of bloodshed, but also provides terrorist groups like Al Qaeda and the Islamic State with the opportunity to spread their tentacles deeper into the Afghan body politic.

During a meeting on April 25 in Moscow, the United States, Russia, and China issued a trilateral communique expressing their intention to “support an inclusive Afghan-led, Afghan-owned peace process.” The Russians, to their credit, have attempted to organize and facilitate some of these discussions. There have been three intra-Afghan conferences in Russia since last November, including discussions between Taliban officials and high-ranking Afghan opposition politicians on the sidelines (the Taliban remain resistant to speaking directly with Afghan President Ashraf Ghana’s government). The latest of these meetings occurred last week, where the delegates spent two days delivering speeches about the necessity of peace in Afghanistan and reportedly exploring ways to end the logjam that has slowed official peace talks to a crawl.

While the Taliban’s contention that “decent progress” was made in Moscow should be taken with a grain of salt, it shouldn’t be entirely dismissed either. The blunt truth of the matter is that a negotiation—inevitably difficult on the best of days—is the only alternative to another forty years of fighting.

It is always an extremely hard task to assess Russian motivations clearly. Vladimir Putin is a wily individual with a Machiavellian streak whose strategy is typically difficult to discern. Moscow has been unhelpful in Afghanistan in the past; Gen. John Nicholson, who handed over command of the U.S. and NATO war effort last September, has publicly accused the Russians of militarily aiding the Taliban through the delivery of weapons across Afghanistan’s northern border (Russian officials have denied these claims as frivolous and unsubstantiated). And there is no question that Putin, ever mindful of expanding Russia’s power in what he regards as a long-term geopolitical competition with the United States, likely views the Afghan talks in Moscow as a way to increase his influence over the process at Washington’s expense.

And yet despite all of this, the United States should be clear-eyed and open-minded about what the Russian government is doing. Some in the Trump administration will likely look at the intra-Afghan discussions in Russia as a sinister plot designed to undermine or even kill U.S. Ambassador Zalmay Khalilzad’s months-long diplomatic effort with the Taliban. There could very well be some truth to this allegation.

But if the meetings organized by the Russians succeed in laying the groundwork for the comprehensive peace negotiations the Afghan people need and indeed deserve, Washington should let the process play out and see where it leads. This, of course, does not mean that the Trump administration should pull the plug on its own dialogue with the Taliban in Doha. Khalilzad should continue to impress upon the insurgent movement the importance—in fact, necessity—of speaking with their fellow Afghans in Kabul about their country’s future.

But at the same time as these discussions take place, it’s important to remember that any forum that encourages Afghans of different ideologies and backgrounds to interact with each other in the same room is far better than any of the alternatives.

The war in Afghanistan has gone on for such a long period of time that the youngest U.S. recruits now preparing for deployment were in diapers when the conflict first started. The American people are tired of the war. Many have simply become apathetic.

Peace remains a distant prospect. But when an opportunity comes along, the United States must seize it and nurture it—even if it isn’t in charge of the process and may have to share the limelight.

Ambassador Charles Ray (retired) is a twenty-year veteran of the U.S. Army and a fellow at the American College of National Security Leaders.