Getting Rid of Generals Won't Save Much Money, But It's Still a Good Idea 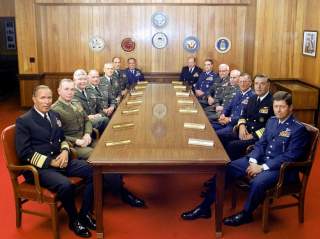 Proposed reforms to the U.S. military command structure designed to save money likely won't save enough to matter. They could, however, be a good idea anyway.

Six years ago, then-Secretary of Defense Robert Gates announced plans to, among other things, shut down Joint Forces Command (JFCOM) and move to cut at least fifty generals and admirals and 150 Senior Executive Service positions over the next two years. This was in reaction to the new “austerity” facing the Department of Defense and was ostensibly going to provide cost savings that could be “reinvested” in the warfighting forces. JFCOM was ultimately absorbed into the Joint Staff and the personnel cuts never came.

Gates' successor, Chuck Hagel, ordered a 20 percent cut in his own staff at the Pentagon as a “first step.” His uniformed counterpart, then-Chairman of the Joint Chiefs of Staff Martin Dempsey, made vague promises of similar cuts in his staff as well as those of the Combatant Commands and the service component staffs that support them. Thus far, little has happened to implement these plans.

Now, Congress is getting involved.

John McCain (R-AZ), chairman of the Senate Armed Services Committee, has been especially vocal for the need to revisit the iconic Goldwater-Nichols reforms. That law, which celebrates its thirtieth anniversary this October, went a long way to breaking down the provincialism between the military services (the Army, Navy, Air Force and Marines) by elevating the role of the Chairman and the geographic combatant commanders (the heads of Central Command, European Command, etc.).

His chamber's version of the National Defense Authorization Act for fiscal year 2017 would, among many other changes, increase the power of the Chairman to reallocate forces between the GCCs and to require the Secretary to “select one combatant command and direct the commander to replace the service component commands with joint task forces focused on operational military missions” in hopes of “improving the integration of operational efforts across the command, streamlining unnecessary layers of management, and reducing the number of staff."

Additionally, the Senate bill would reduce the number of generals and admirals 25 percent across the board., contending that “the size of the general and flag officer corps has become increasingly out of balance with the size of the force it leads” and noting that “Over the past 30 years, the end-strength of the joint force has decreased 38 percent, but the ratio of four-star officers to the overall force has increased by 65 percent.” But, again, the main focus is on budgetary savings to allow leadership to “shift as many personnel as possible from staff functions to operational and other vital roles."

As Brian Palmer noted back when Gates proposed the cuts, getting rid of generals and admirals doesn’t really save much money in the grand scheme of a $600 billion annual Defense budget. That remains true even when one factors in the accompanying support staff that goes with each of those billets.

Further, as Senator Tim Kaine (D-VA) rightly notes, the 25 percent figure seems “pulled out of thin air” rather than as the basis of any serious needs assessment.

Still, the proposals are a step in the right direction.

While planning staffs are an essential part of large military organizations, there has been massive bloat in the three decades since Goldwater-Nichols. Partly, that's a function of the law's requirement that officers complete a qualifying joint assignment before being selected for general or flag rank. That, naturally, creates institutional pressure to create qualifying billets. More significantly, the law rightly stripped much of the power that the service secretaries and chiefs had in the budget process. The bureaucratic work-around was to increase the size of the service component staffs at each of the combatant commands in order to ensure service “equities” were constantly looked after in the planning process. While understandable, it not only led to much larger and more expensive staffs than necessary but undermined the chain of command. The (usually four-star) commanders of Army, Navy, Marine and Air Forces in a theater report directly to the four-star geographic combatant commander. But they also answer “indirectly” to their service chiefs, who have Title 10 “man, train, and equip” authorities. The two masters are in constant tension.

The pilot program is a step toward mitigating that problem. Take the current Pacific Command organizational chart as an example. The four-star commander has a three-star deputy and a two-star chief of staff. There are nine J-code staff directors, who range from two-stars to colonel/captain rank, each of whom have a subordinate staff. There are three subordinate unified commands (Japan, Korea, and special operations) commanded by three-, four-, and two-star generals, respectively. Then there are four subordinate component commands, representing the services. The Army and Navy each have four-stars, while the Air Force and Marines have three-stars. There's also a separate standing task force commanded by a rear admiral and a handful of special headquarters. And that's just the top level of the organization.

Not only is that a lot of overlapping staff, with several four-stars reporting to one another (and in some cases to yet another) but it's not even a warfighting headquarters. In the old days, a General Norman Schwarzkopf would run the war as the CENTCOM commander. Nowadays, we form a joint or combined task force, typically assigning either the deputy GCC or one of the component commanders as the task force commander and then designating a joint/combined ground force, maritime force, and air component commander. Why not just operate that way all the time rather than creating a new organization on the fly when it's time to actually fight the force?

Relatedly, the Senate plan would cut the number of four-star officers from the current 41 to 27, limiting the billets to the most obvious posts ("Chairman, Vice Chairman, and other members of the Joint Chiefs of Staff, including the head of the National Guard Bureau; the Combatant Commanders") plus “the Commander of U.S. Forces– Korea; one additional joint billet for which the President could nominate for advice and consent by the Senate an officer for a four-star joint command (such as the current mission in Afghanistan); and three additional four-star billets each for the Army,

Navy, and Air Force to be filled as they choose."

Indeed, from a pure unity of command perspective, the three “filled as they choose” slots for the services seem superfluous. It makes sense for the Joint Chiefs to be four-star officers. Ditto the combatant commanders, whether geographical or functional. They're the core uniformed leadership of the armed forces. Likewise, it makes sense for commanders of especially large long-term task forces, such as the commanders in Korea and Afghanistan, to hold four-star rank, since they have multiple three-star subordinates.

It's not obvious, however, why the vice-chiefs of the services need to also be four-star officers. Or the service-level component commanders at each of the combatant commands. Let alone the service-level Materiel Commands. The Director, Naval Nuclear Propulsion Program?

Again, reducing these posts to three-star billets would have negligible impact on the budget. Because their pay is capped based on the Executive Schedule, they're all paid the same, so all we'd save is a bit on the staff-related perquisites. But, aside from truly large warfighting commands nested under a geographic combatant commander, there's no obvious reason to have four-stars report to four-stars, let alone have three and four layers of that.

Among the other proposals in the bill are 25 percent reductions in staffing of DoD and Service-level headquarters, including a 25 percent cut in senior executive service civilians employed by them, and a modest realignment of bureaucracy at the assistant-secretary level. Given that “25 percent” seems to be the figure that they arrived at in every instance, one strongly suspects that Kaine's “thin air” was indeed the source. Still, the nature of bureaucracy is to increase with the addition of new problems and areas of emphasis, but not to go away once the problem at hand is solved or minimized. An order from Congress, combined with corresponding funding cuts, is not a bad starting point for Pentagon leadership to conduct a thorough reassessment of their staffing structure and seeing what's really needed.

The House version is much less ambitious. Its main reforms are to the acquisitions process, which is beyond the scope of both this essay and my expertise, and to end strength. Additionally, it has similar language with respect to the role of the Chairman and modifying the formal strategic-review process. We shall see how much of the Senate vision makes it through the conference process. And, of course, there's always the potential for President Obama to veto the bill over completely unrelated issues.

It's long past time to decrease the bloat in our military command and staff structure. While the cost savings that are driving reform are likely illusory, streamlining the process and sharpening the lines of command are valuable in their own right.