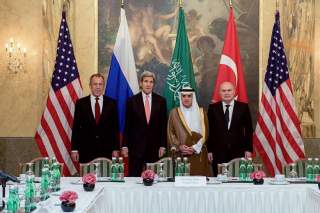 With the second round of Syrian peace talks in recent weeks about to take place in Vienna, the United States and other participants need to raise their sights from a narrow focus on the specific modalities of a negotiation between the antagonists to incorporate a broader strategy for confronting the underlying dynamics of this entangled conflict. Unless these underlying dynamics become central to a strategy, it is unlikely that a diplomatic track will bring the Syrian civil war to a halt. Confronting these dynamics should be the focus of U.S. and Western policy, and the basis for exploring whether the Russians and Iranians can be levered into playing parallel, constructive roles.

One of the primary underlying dynamics that needs to be addressed before settlement terms can even be set is the battle over competing ideas. In fact, to make matters even more convoluted, there are actually two battles for ideas raging at once. The first is being waged by ISIS in the northeast part of the country (and in Iraq). In this battle, ISIS is trying to smash the idea of Syria and a Syrian national identity. The idea that they are trying to propagate is not just that Syria has ceased to be a viable going concern, but also that it is illegitimate. By wresting away Syria’s most vital border crossings with Iraq, it is reinforcing the narrative that the boundaries set through the treaties of Sevres in 1920 and Lausanne in 1923, when the Ottoman Empire was dismembered (based partly on earlier secret dealings between the British and French), are artificial, illegitimate and deserving of being destroyed. It is also battling the idea of Syria and Iraq by sowing Sunni-Shia tensions, thereby destroying any basis for nationalist cohesion within society that could possibly rise up and pose a challenge to the harsh reality of ISIS’s Salafist, jihadist variant of a Sunni caliphate. This ISIS creed is a critical challenge to be overcome: keeping alive the idea of Syria as a viable entity—even on life support—is a necessary exit ramp for this conflict, just as the negation of Syria (and Iraq) has been instrumental in recruiting and mobilizing ISIS followers in the first place.

The second battle of ideas is taking place further south in Syria, and is being waged by the Assad regime, the Russians, the Iranians and Hezbollah against a complex and incoherent mix of anti-regime rebels. While in the north ISIS propagates an anti- or supra-nation-state creed that rejects the existing territorial order of states in the Middle East, including Syria, that creed is not shared by the other “sides” fighting in the south and elsewhere in the country. In fact, the pro-Assad regime forces in the south are indirectly confronting ISIS’s creed against the reconstitution of Syria, not through an ideological narrative as ISIS is doing, but instead by fighting for the survival of the Syrian state apparatus and battling rebel groups of all stripes and colors.

But by focusing more on keeping Assad in power than on battling ISIS, it appears as if the war is being fought more over the spoils of what is left of Syria than about reconstituting the idea of Syria as a nation. While questions about Assad’s fate will obviously be important, the danger of making who will govern Syria the focal point in the negotiations at this juncture is the loss of focus on the bigger battle to salvage and restore the idea of Syria itself. In Vienna, this question about whether the priority should be the fate of Assad or the broader challenges to the notion of Syria is important, as it provides the potential basis for the eventual ideological marginalization and isolation of ISIS, and the reintegration of the country.

This polarity over creeds and ideas should be the entry point for U.S. policy. It provides the basis for systematically testing the intentions of other participants in the conflict. This should frame the question of priorities, and be the level at which the debate between Russia and the U.S. takes place in Vienna. If they can agree that the primary threat comes from those challenging the creed and idea of Syria itself, namely ISIS, then the question of who governs Syria and how to establish transitional arrangements becomes less of an intractable obstacle to negotiation.

The role for the U.S. should be to reframe the debate in these terms at the negotiating table, while at the same time using the Saudis and Turks to make clear to the Russians, Iranians and Assad himself that the early Russian splash in Syria notwithstanding, the anti-Assad forces (with our support) will be using powerful means to prevent a rout of rebel forces. It will be important to keep some pressure on the Russians and their proxies, even while keeping alive a diplomatic track and opening the door to constructing a more broadly based coalition of the willing against ISIS. None of the Vienna parties supports the destruction of the Middle East’s state system, a point that should provide some common ground amidst all the factional and sectarian mix.

It is likely that military campaigns will continue even if the talks in Vienna go well. But what the diplomatic track in Vienna can do is provide context for the battles that will likely ensue. There will continue to be two distinct military struggles: the struggle in the northeast part of Syria against ISIS and the battles being fought in the southwest and northwest parts of the country by Assad, the Russians, Hezbollah and the Iranians against other rebel groups. But with successful diplomacy these two military fronts can become inextricably linked. Unless ISIS can be pushed back, the idea that Syria is an historical anachronism could gain traction and alter the stakes for the protagonists in the south. It will determine whether they are fighting for the viability of the state, or just the spoils of the state that once was. An acknowledgement in Vienna that what is at stake is the survival of Syria, and the Arab state system more generally, could shift American and Russian military efforts on the ground towards achieving that goal.

If the focus moves to Syria as a sovereign state, this sets the later stage for questions about how the country will be ultimately governed. With discussions focused on Syria’s survival, the agenda moves far beyond Assad’s future and transition timetables. And it goes far beyond avoiding unintended military encounters—that is, deconfliction. It addresses the issues of who can best help mitigate Syria’s social and economic disaster, how to maintain and adapt Syria’s state institutions, how to restore the distribution and transport systems and to stabilize populations, how to monitor ceasefires and how to begin the hugely complex process of demilitarization. And it moves toward discussions on how to enable Syrians to begin envisioning a multi-confessional, secular social compact.

The second dynamic of the Syrian conflict that needs to be confronted in order to pursue peace involves the logic of security systems. By definition, when civil wars commence the system of security and order that had once maintained the state apparatus in some form of equilibrium collapses, and something else evolves to take its place. This was certainly the case in Syria. A new system filled the gap consisting of a largely regionalized “conflict system” of competing interests between Iran, Lebanon-based Hezbollah, Turkey, and Saudi Arabia and other GCC members. In other words, Syria became a microcosm of the region, importing its conflicts, rivalries and fissures.

This is not to say that this proxy-war dynamic was completely imposed by Syria’s neighboring powers, as it wasn’t just the ambitions of the Iranians and the Sunni states that have driven the conflict. To the contrary, various factions to the conflict in Syria (and Iraq) looked to outside powers to help shore up their respective positions. Local actors, trying to jockey for position, looked for support from the regional (and now the international) actors, inviting in the neighbors to build leverage for their positions. In other words, in addition to a “push” dynamic, there was also a “pull” dynamic wherein the vortex of the local conflict drew in these regional powers. But regardless of who was invited, or came uninvited, this dynamic has created a negative security system that is fueling the conflict, not mitigating it. And while in the beginning the proxy regional powers had a semblance of control over the dynamics, that control has now been lost.

In order for conflict management to take place, the momentum of this negative security system has to be broken, with international and regional actors opting to convert their conflict intervention into conflict mitigation. While some parties are much more powerful and central than others, none of them alone can master the scene and impose their will. Unless the international powers and bodies (i.e., the UN and EU) can find a pathway to help the regional powers in this regard, Syria will remain adrift with all its horrendous human consequences and challenges to regional security.