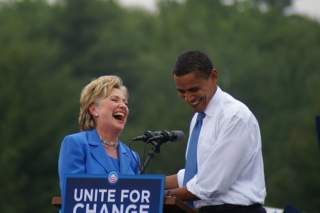 Out of date, partisan ideas

Of course, as bad as the Obama-Clinton foreign policy has been, her single biggest vulnerability is probably on domestic issues. The Obama years have been notable for a regimen of hyper-spending, hyper-regulation, out-of-control political correctness, and shrill identity politics. Most normal people are getting fed up with it, but left-liberal political activists are now whipping themselves into a fervor arguing for the continuation and expansion of this regime. There is no indication that Hillary Clinton—always to the left of her husband, ideologically—disagrees with any of this. On the contrary, when confronted with the failures of current liberal policies, her typical answer is they haven’t been pushed far enough. Indeed she appears eager to reassure her activist base that there are few practical differences between the socialism of Vermont senator Bernie Sanders, and her own longstanding liberal convictions.

“Fresh thinking,” indeed. More likely: too liberal, for too long. But within the left-liberal echo chamber, if you call yourself fresh for long enough, apparently you start to believe it. Voters in 2016 may be less easily convinced.

Hillary denounces the prospect of “cowboy diplomacy.” But what does she have against cowboys? In real life, the typical North American cowboy is often deliberate and measured while truly tough-minded. This doesn’t sounds like a bad mindset or combination for U.S. foreign policy.

Conservatives, like all Americans, have reflected for several years now on the lessons of the 2003 invasion of Iraq. There is, for example, a greater sense of skepticism today, and justifiably so, as to the ease of democracy promotion within the Middle East. But this hardly means we have given up on combating jihadist terrorism. On the contrary, we observe that the scope of territories controlled by such terrorists has only expanded under Obama, and that his policies have therefore been inadequate.

Perhaps one real lesson of Iraq 2003, in keeping with the lifelong experience of military professionals, is that if the United States is going to engage in armed intervention overseas, it should do so only with the most thorough preparation—and then with true decisiveness.

Yet this is a lesson, by the evidence of his own half-hearted policies in Libya, Afghanistan, and Iraq, that Obama has never learnt.

Observing the results of the Obama-Clinton foreign policy over the past six years, most American conservatives are converging on the following commonsense conclusion: if we distance ourselves from international allies, and focus on accommodating America’s adversaries, as Obama has, then obviously the United States will end up with stronger adversaries and fewer allies. The current need therefore is not for reckless international decisions, including reckless retrenchments or accommodations, but instead bolstered deterrence, determined American leadership, restored friendship with U.S. allies, a strengthened national defense, and firm counter-pressure against a number of serious authoritarian adversaries—a foreign policy that is deliberate yet tough-minded.

Call it genuine cowboy diplomacy. And if Clinton wants to oppose it, she’s free to do so.

Clinton loves to pretend that Republicans are engaged in what she calls “reckless warmongering.” But what specific war is she referencing? Presumably, as always, the invasion of Iraq more than twelve years ago.

Only one problem here: she voted in favor of and supported that invasion. So what exactly is her argument?

There is not a single case internationally where any Republican presidential candidate calls for the introduction of U.S. troops into combat where they are not already on the ground. This includes America’s half-hearted engagement against ISIS, where Obama launches pinprick airstrikes and deploys U.S. boots on the ground while—like Clinton—disingenuously denouncing “boots on the ground.”

Incredibly, the current view at the left wing of the Democratic Party is that Obama’s foreign policy has been much too tough in relation to international adversaries. And this is not a small minority view among Democrats. One of the great under-reported facts of the Obama years has been deep divisions over foreign policy and security issues among Democrats. According to the polls, whether the issue is drone strikes, Iran, counter-terrorism, military spending, ISIS, or Afghanistan, a large percentage of the Democratic Party feels that Obama has been much too hawkish. This is the segment of the party for which Bernie Sanders speaks today. Clinton of course is well aware of this feeling, and eager to reassure leftist anti-war activists that she has no fundamental disagreement with them. This helps explain her demonization of Republicans as warmongers, to rally her own base. But it puts her in a difficult position insofar as she must simultaneously lay out a serious case on national security heading into 2016. Whether she can walk this tightrope remains to be seen.

Altogether, when it comes to foreign policy, Clinton wants to have it both ways. She wants shared credit for whatever went right internationally under Obama—but no responsibility for all that went wrong. She wants left-liberal party activists to believe her heart is with them—but she also wants genuine moderates to believe the same thing. She wants credit for being hawkish and tough on national security—except when it’s more useful to be a dove. She wants to launch withering criticisms of Republicans—but not be subjected to them. Whether the issue is foreign policy, e-mail servers, Benghazi, or political fundraising, the pattern is very clear: there’s one set of rules for the Clintons, and another for everyone else. People have long since caught on to this, which is why most say they do not trust her. You might say she lacks cowboy directness.

Heading into 2016, Clinton will no doubt try to distance herself from some of Obama’s more obvious foreign policy failures. Yet insofar as she was his secretary of state, and participated in those failures, any such distancing will not be credible. Like it or not, she is inextricably tied to this president’s international record marked by weakness and frustration. Moreover, she must contend with increasingly serious divisions among Democrats over national security matters. What Clinton really promises, on foreign as domestic issues, is simply four more years. But since the general public now views the president’s international leadership as ineffectual, four more years is not appealing. If Americans continue to disapprove of Obama’s foreign policy to the extent they do now, they will hold Clinton accountable, regardless of what she says or does—and rightly so, since she was a leading player in the implementation of those policies, and offers nothing different.

We can all expect to be bombarded by the Clinton-industrial complex over the next fifteen months with dire warnings that anyone who resists Hillary’s uninspiring march toward the White House must be an enemy of world-historical progress. Perhaps some will be intimidated by this nonsense. Meanwhile, Republicans can point out the obvious: Obama has proven to be a blinkered, unsuccessful foreign policy president, and Clinton only promises more of the same. Further pursuit of an overseas policy so deeply informed by liberal ideological bromides, in spite of hard evidence it’s not working, would be genuinely reckless. Having failed for all practical purposes since 2009, the Obama-Clinton international approach is now officially out of date.

Colin Dueck is associate professor in the School of Policy, Government, and International Affairs at George Mason University, and the author of The Obama Doctrine: American Grand Strategy Today (Oxford, 2015.)