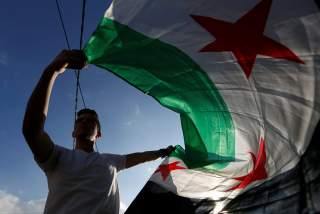 Compare the satellite images of Eastern Ghouta before the war and what the area looks like today, and the cluster of farmland and suburbs to the east of Damascus is literally unrecognizable. The suburbs encircling Bashar al-Assad’s seat of power are a mix of debris, dust, smoke, economic destitution and dead bodies. Entire districts have been wiped out and tens of thousands of buildings have been destroyed: in Zalmaka, a town in Ghouta, 59 percent of the buildings have ruined or partially damaged. In Jobar, closer to downtown Damascus, the number goes up to 93 percent. UN Secretary General António Guterres’s description of the situation as “hell on earth” doesn’t even begin to describe it.

What Assad has done to Daraya, Zabadani, East Aleppo and Madaya in the past he is now doing to Eastern Ghouta. Since the regime escalated its offensive on February 18, upwards of one thousand civilians have been killed, with the death toll going up every single hour of every single day; over a dozen hospitals have been attacked; food, water and medicine have slowed to a pittance; and the violence has been so ferocious that a full account of the dead and wounded won’t even begin to be known until the fighting stops. When the regime discovers a modicum of decency and decided to grant aid shipments into the area, medical equipment is stripped from the convoy and humanitarian workers are constrained by artificial deadlines to unload their cargo.

The damning irony of this situation is that we all know how this horror movie will end. The Assad regime’s bomb-and-strangulation tactics are beyond brutal and criminal, but they have also proven to be effective in routing the armed opposition in major cities across the country. Surrounding an enclave, bombing the area mercilessly, preventing the most basic humanitarian goods from entering, and the desperately wounded from leaving forms the backbone of the regime’s collective punishment strategy to grind down rebel units until they have no will left to resist. The objective; make daily life so impossible that the men with guns sue for a ceasefire or a forced evacuation.

Sooner or later, this is precisely how the operation in Ghouta will end. Assad is mimicking the playbook he used in East Aleppo in the fall of 2016, and it is a certainty that the outcome in Ghouta will be precisely the same: more indiscriminate pounding from the air, a ground offensive to split rebel-controlled areas into smaller and smaller pockets to be followed by an unrelenting siege until regime opponents wave the white flag and succumb to the government’s terms. With pro-government forces reportedly clawing back territory in Ghouta from the east, it is only a matter of time before the area falls back into Assad’s control.

The questions left to be answered are how long will this process take? And how many more civilians will be killed before that day arrives?

While it may sound perverse and downright counterproductive, the one policy likely to save the most lives between now and then is finding a way to make the regime’s takeover of Ghouta as peaceful as possible. As Aron Lund of the Century Foundation has written, the worst possible course the United Nations can take is allowing the fighting in Ghouta to follow the trajectory of the fighting in East Aleppo, when the Security Council was forced into a last-minute mandatory evacuation of civilians and rebel fighters in order to stave off a continued humanitarian catastrophe.

What the residents of East Ghouta need now more than anything else is a return to normalcy—or a future as close to normalcy as one can get after a five-year siege. This, however, won’t occur as long as rebels in the suburb continue to delude themselves into believing the United States will save them from defeat or believing they have a chance in keeping the enclave under their dominion. The armed factions in Ghouta may like to think that they can hold the frontline in perpetuity against a far superior Syrian government force, but the history of the conflict throws a cold glass of water on that hope. In every instance rebel units find themselves in the position of being surrounded, deprived of food and medicine, and hit hourly with dumb bombs and barrel bombs, these same fighters have had no option but to resign themselves into an evacuation-for-surrender deal.

Opposition fighters will no doubt be kicking and screaming at the prospect of evacuating the last major toehold they hold close to Bashar al-Assad’s seat of power. The thought of giving up this area to Assad and recognizing that handing over the territory would complete the regime’s control over the Damascus suburbs is disturbing and depressing for these men to accept. But accept it they must; there are no other alternatives other than resisting to the last man and guaranteeing the deaths of hundreds of additional civilians, all for the same result.

Any deal ending the violence and suffering in the suburb will obviously require Assad’s blessing to be successful, so the terms will need to be advantageous enough for him. Even so, counting on Bashar al-Assad to cooperate is an open question; he has reneged on countless deals throughout this conflict, the most significant being the 2013 agreement brokered by Washington and Moscow requiring him to destroy his chemical weapons stockpile. Nationwide ceasefires declared between the government and the armed opposition tend to be violated as quickly as they are signed. Russia has been either powerless to hold Damascus to its commitments or has been uninterested in doing so.

The international community, however, has a duty to try. As soon as possible, the major foreign players in the Syrian conflict should approach both sides and explore whether a managed and verified surrender-for-amnesty deal is possible. If Assad agrees to let civilians remain in their homes and grants an unconditional amnesty monitored by foreign observers (perhaps a hybrid of Russian and U.N. peacekeeping forces or Russian-Turkish troops) in exchange for government control of the suburb, then the 350,000 civilians who are currently being terrorized will finally be able to come out of their basements.

An Assad-controlled Ghouta is not a development most would want. But foreign powers don’t have the luxury of viewing the world through rose-colored glasses. Sooner or later, the Syrian government will win the fight in Ghouta. The only question is how many civilians will have to die before it becomes a reality.