Gina Haspel Has Reignited the Torture Debate in America 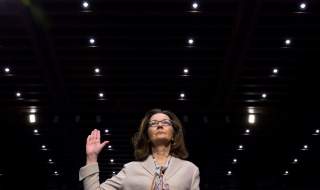 Until a few days ago, few people, even in Washington, had heard of Gina Haspel. Now she is the talk of the town for her nomination to direct the Central Intelligence Agency. Though a woman at the head of the Agency would be unique, the principal factor drawing large scale attention to her has to do with her involvement in the Agency’s “enhanced interrogation” (e.g., waterboarding) program following 9/11.

Predictably, it has reopened a serious debate about when, if ever, torture is permitted in the name of national security. Political and public opinion before the first decade of the twenty-first century had rarely if ever focused on this question. Now it has returned to the front page.

As the only member of Congress to have suffered torture, Sen. John McCain, emerged in the opening of the debate and regarding the Haspel nomination as the conscience of the nation on the question. He has argued not only that it doesn’t work, that is does not produce serious, actionable intelligence, but more importantly that it demeans and degrades America’s moral standing in the eyes of the world.

The broader question has to do with America’s role in the world. During the first quarter of the Trump presidency, we have seen what many foreign policy experts deem this the end of the post–World War II Western democratic consensus, disengagement from trade, environmental and security agreements that have defined the Western coalition since 1945.

The counterpart to disengagement is the Lone Ranger policy in Iran and North Korea whose effectiveness and ultimate outcome will not be known for some time.

Throughout the seven-decade era of engagement under U.S. leadership–much of it dominated by the Cold War–U.S. national leaders relied heavily on intelligence much but not all of which was produced by the CIA. Published reports suggest that the incumbent president, unlike his ten predecessors, pays little attention to the daily intelligence briefings, insists on compression of the world’s dangers to a page, and prefers graphics to text.

Back to Ms. Haspel. This is what she has to look forward to, presuming she is confirmed. Many Americans, this writer included, wish her to denounce torture as an instrument of intelligence gathering. It would ease the minds and consciences of many were she to do so. But the even greater burden she bears is to find a way to focus the president’s attention on the serious realities of the day embodied in the daily brief.

Foreign policy by dart board, when the dart thrower is blindfolded, is fraught with peril to say the least. If she was questioned on how she intended to attract the president’s attention and convince him to read or listen, it did not show up in media reports.

If the diplomat-in-chief seriously intends to continue disengagement from the world, then perhaps attention to daily realities is less important. But, to paraphrase the old formula: the president may not be interested in the world, but the world is interested in him.

The so-called foreign policy establishment, National Interest readers very much included, is wise enough and experienced enough to know that the world is changing fast, that it does not wait for us to catch up, that power centers in Moscow and Beijing especially are dynamic, that climate change is real and threatens mass migrations from all the coasts worldwide, that pandemics are just around the corner, that a nuclear arms race in the Middle East is just unleashed, and a host of other emerging new realities. To not understand them and consult widely with experts in and beyond the two parties is to court disaster.

Reams of pages have been written about foreign policy challenges in this new century. They do not require rehearsal here.

But the next director of the Central Intelligence Agency, Ms. Haspel or whomever, must find a way to gain the president’s attention. Otherwise, the Agency and the broader intelligence community is just wasting its time. The nation cannot depend on the vice president, secretaries of state and defense, and the National Security Advisor to get the president to focus on immediate and looming dangers.

We apparently are seeing a new approach to America’s role in the world, America first disengagement with occasional exceptions. That is problematic enough. But that approach also disengaged from serious intelligence information risks very serious mistakes.