Give China a Chance to Improve America's Transit System 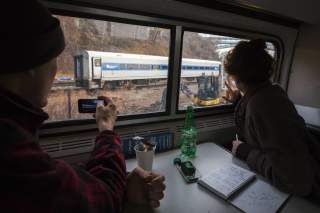 In today’s day and age, we have no shortage of things to fear. Chinese hackers bugging buses or taking control of rail cars is not one of them.

Yet a provision in this year’s National Defense Authorization Act would ban the use of federal mass transit funds for the purchase of any rail cars and buses that come from manufacturers owned or subsidized by the Chinese government. Proponents of the ban argue that if it’s made by a Chinese company, it’s hackable, and therefore poses a threat to national security. As Rep. Harley Rouda (D-CA) has said, “Mak[ing] sure we have viable rail and bus industries,” and that we protect our public transportation systems “from spying and sabotage,” is “in the national interest.”

In the last couple of months, the ban has gained support from the White House, and versions of the proposal have passed both the Senate and the House. Yet this approach would be a massive overreaction to something that is not likely to happen. If passed, then it would harm public transportation agencies in major cities across the United States.

The ban targets two companies in particular: BYD and the China Railway Rolling Stock Corp. BYD is a publicly-traded company that produces electric buses for some of the nation’s largest transit agencies—including the Los Angeles Metro. Despite being Chinese-owned, 60 percent of BYD’s stocks are owned by U.S. investors. CRRC is the world’s biggest railcar manufacturer. It has contracts to build railcars for cities including Boston, Philadelphia, Los Angeles and Chicago. It was awarded these contracts through competitive bidding processes, beating out other foreign rolling stock manufacturers.

Since no domestic companies make train cars, the ban could eliminate hundreds of jobs at the factories that these companies have set up in the United States. It would also severely limit the options of transit agencies and could raise the price of production across the country.

But more to the point: The fears of Chinese-built railcars are dramatically overblown. The threat is real but hacking into or launching a cyberattack on transit vehicles is not the only—or even the easiest—way to create a security vulnerability in our nation’s transportation systems. After all, staff members are still using removable hard drives on transit agency computers and still failing to install security updates regularly.

The proposal also raises questions about the value of any data a railcar or bus might have to a hacker. Setting aside the possibility of Chinese intelligence officials having a laugh about how infrequently we run our buses or how often our trains break down (or catch fire), there is simply no national security threat inherent to the Chinese government knowing whether your bus is going to be late. And if foreign officials really cared about this information, then they could find it through public data anyway. In short, the likelihood of foreign hackers gathering priceless intelligence by monitoring the daily commute of thousands of people slogging to and from work every day is minimal.

As manufacturers of transit vehicles, Chinese companies already know how what they made works; they don’t need to use cars or buses to spy on our transit networks. And even if we did ban these rail cars and buses, bad actors could always find a way into the system—no matter who manufactured the vehicles used.

Instead of caving to the knee-jerk impulse to ban Chinese-made rail cars and buses, we should consider the risk of using foreign-made products in our American transit systems on a cost-benefit spectrum. In some situations, even the slightest risk to national security or cybersecurity is not acceptable. But in other situations, such as that foreign-made rail cars and buses, the risks to our nation’s security are outweighed by the cost of complete prohibition. In the case of transit vehicles, the costs are also compounded by the fact that the financial burden of increased security is borne entirely by taxpayers.

But what if a train or bus is taken over, causing some kind of derailment or another incident? Here, an answer already exists: The American National Transportation Safety Board would be on the case, with the resources to figure out what caused any crash that might occur and reveal who is to blame. If the threat is substantial enough, then spot inspections like the ones used to ensure general railcar workmanship could also catch any adulterated cars before something goes wrong.

We can never guarantee 100 percent safety, no matter who supplies our railcars and buses. But forcing American transit agencies to spend more taxpayer dollars on cars built by non-Chinese manufacturers is a solution in search of a problem. The threat is limited, and a purchase ban would do nothing to mitigate what little danger remains. It’s time to stop worrying and start enjoying the money we save on new trains.

Ann Phelan is Associate Director of Communications at the R Street Institute. Previously, she worked as a communications manager for the Eno Center for Transportation.