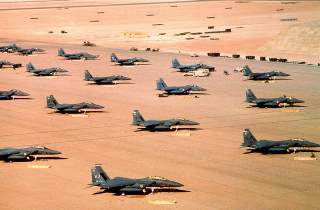 In a recent National Interest essay, “Don’t Let the DC Blob Guide Trump’s Foreign Policy,” Gordon Adams and Richard Sokolsky argue that the new administration shouldn’t follow what the Obama administration dismissively termed the foreign affairs “blob” of ex-officials, think tankers, NGO leaders and media commentators who allegedly press for an interventionist foreign policy. So far so good, who wants another Iraq or Vietnam? But in writing this important piece, they appear to advocate not just ending regime change efforts, but seemingly the substance of America’s global security leadership role. This would truly be the “revolutionary change” they urge, but an extremely dangerous one, especially since Donald Trump, Bernie Saunders, at times President Obama, and as the authors cite, much of American public opinion, seem open to their arguments and similar ones by Hugh White, Jonathan Rauch and John Mearsheimer.

The danger begins with imprecision in describing the policies against which the two authors argue. At various points they take to task using force “to topple governments, influence the outcome of civil wars, and promote democracy and human rights.”

Adams and Sokolsky might encounter more support than they suggest with the Blob if they stopped there. But they instead continue on to challenge much of American foreign policy since World War II. To their “not likes” they add: a “hyperactive and muscular approach to dealing with the world’s problems”;  “‘global cop’ responsibilities”; and most explicitly, the “faith” that the United States should be the “global leader” and “indispensable” nation “to shape regional and global security, to maintain its domination of other regions, and to secure the safety and well-being of the globe.”

But these last American missions, even given the negative description, are not the same as the first set, which involve intervention inside states. Rather, this latter set is the core of U.S. policy since World War II, which has kept the world basically at peace after two world wars.

By conflating the latter with the former, the authors project the shadow of our unnecessary, costly, unsuccessful interventionist policies onto our role as leader of a global collective security community, which, with American power at its core, has had great success in securing peace.

It is true that both impulses—that of leading the international community and shaping global security, and that of overthrowing regimes and “imposing democracy and human rights”—have long coexisted in American foreign policy.  Both reflect Americans’ faith in liberal values at the international and societal levels, and the two are complementary: a peaceful international order encourages liberal societies; such societies in turn (think the EU) support such an order. But these impulses are separate, and our success with them dramatically different.

A review of specific cases, which Adams and Sokolsky avoid, can help. U.S. engagement to deter and repel aggression as the center of our global security role has been extraordinarily successful:

• The liberation of South Korea in June-October 1950

• Defense of Taiwan and South Korea over decades

• Protection of Israel from defeat and Soviet intervention in 1973

• Pushback of the Soviet Union in Afghanistan, and Iran in Iraq in the 1980s

• The “Tanker War” with Iran

• Against al Qaeda and later ISIS

The foregoing do not exhaust all the efforts by the United States and the international community to secure peace. Arms control accords, UN resolutions, peacekeeping, economic and military assistance all complemented these actions. But they were the “hard cases,” and a similarly vigorous American response was what was fatally missing in the 1930s.

In contrast, where America has consistently failed (a few interventions in the Western hemisphere notwithstanding) has been with regime change, “armed” nation and state building, and intervention in internal conflicts:

• The Bay of Pigs

These failures generated almost all of America’s ground combat operations, 95 percent of its casualties and most of its exceptional defense costs since World War II.

The global leadership “cop” role has worked because the United States consistently had international law and a large number of allies on its side. Most of the time it worked largely through global and local partners or surrogates. Military operations focused on air and sea power with ground forces usually in a deterrent role. The only major U.S. ground combat operations — liberating South Korea and Kuwait — involved clear, feasible missions and quickly succeeded.  As the United States at no time threatened the existence of any foe, resistance to essentially a “defensive” U.S. role was limited. America’s interventionist adventures in contrast violated most of these principles.

Adams and Sokolsky could argue that actually they oppose the interventionist rather than global order missions. But that is certainly not clear in their piece. It’s easy to extend legitimate criticism of the interventionist impulse to America’s larger, notably successful global role. President Obama himself has had difficulties differentiating between the two. Thus leaders in the Middle East, East Asia and Europe have been urging him to act, not to overthrow states, but to better protect the perimeters of what once we call “the free world.” If a Trump administration were to strengthen this already dangerous disengagement, the resulting world would look like the nineteenth century, as advocated by Putin and Xi. We saw how that ended up.

James F. Jeffrey is the Philip Solondz Fellow at the Washington Institute for Near East Policy.  He is a retired foreign service officer who served as Ambassador to Albania, Turkey and Iraq and as Deputy National Security Advisor.