Global Power Puzzle: Why China’s Rise Doesn’t Cause a Problem 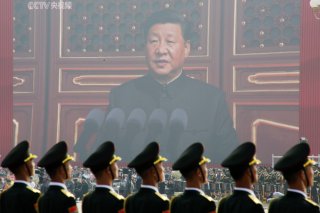 China is increasingly classified as a threat to the world order by the United States and Europe. A kind of behemoth harboring evil designs. This image makes light of its domestic problems epitomized by its struggle since unification 221 BC to achieve peace, prosperity, and harmony. Recipients of policy statements are the Chinese population, not the United States and Europe. Formulations and vocabulary are chosen to that effect. It is Sino-centric and entails no tradition for imperialism as adopted by Western powers over the past five hundred years.

The Duke of Wellington always wondered what was “on the other side of the hill.” In 1946 George Kennan took a look with the “long telegram,” which he later expanded into an op-ed published by Foreign Affairs in 1947 under the title The Sources of Soviet Conduct. These two great men acted sagaciously trying to figure out what opponents were thinking and planning, whether they constituted a threat, and if so, then how to respond.

China’s history rotates around a string of dynasties with the emperor as the son of heaven. They all came into power by putting an end to the chaos, initiating economic progress, and ensuring meritocracy through the mandarin system. As time passed, the country descended into mediocrity, nepotism, a self-serving elite living at the imperial court and not caring about the livelihood of the peasants who turned against the dynasty. The emperor was seen as having lost his blessings. He had been disowned. The dynasty was godforsaken. The door opened for the next dynasty.

This pulse defines China’s history. A mindset going back thousands of years does not disappear overnight. The Chinese Communist Party (CPC) is today’s dynasty and fully aware of the revolving door. Any kind of interference from abroad, however innocent it looks in Western eyes, is judged by its impact on stability. Social unrest must not be allowed to do to the CPC what it did to every single one of the preceding dynasties.

The result is a prism turned inwards, preoccupied with various domestic problems. Politics ranks above any other consideration including economics. The CPC has examined the collapse of the Soviet Union and the dismembering of the Soviet Communist Party thoroughly to forestall something similar. Apparently, the conclusion drawn is to strengthen the prerogative of the party and stop any kind of uncertainty about its right to govern China on the basis of “we know best.”

The Western political model is deemed totally unsuitable for China. Additionally, the CPC does not harbor ambitions of exporting the Chinese model. It does not see itself as a messenger of a new social and political system destined to conquer the world as the Soviet Union did. Marxism-Leninism was adopted as a suitable instrument to awake the country after two hundred years of hibernation, but basically, the CPC looks for a Chinese model justifying its role as the son of heaven.

To step into that role the CPC carries investments along three axes: The environment, rising living standards, and better transport. All three are geared to solve problems that have harassed the country throughout its history. That makes them easy to understand making opposition or dissent a remote risk.

China was basically forged around two river systems: Hwang Ho in the north and Yangtze in the south. The rivers carry sludge with them making the lower part of the systems fertile. They are difficult to tame and almost continually flood parts of the countryside often with devastating consequences such as famine. When the famine occurred the emperor had lost his blessings and the demise of the dynasty was in sight.

The CPC’s determined effort to combat pollution, ameliorate the environment and fight climate change comes naturally for any Chinese dynasty as it conforms to endeavors by the rulers over thousands of years to tame the river systems. All dynasties fought ferociously to do so, but to no avail, as nature was too strong.

The family was the cornerstone of Chinese life and anchored in the villages. The dynasty’s role was to promote a peaceful political environment delivering prosperity making it possible for the families and the villages to blossom. If anything disturbed this lifestyle, then the dynasty/emperor was held responsible. The villages—the peasants—rebelled.

It was difficult almost impossible for the central power—the emperor—to alleviate problems in one region by transporting food from well-off regions. First, in ancient China, it was unusual for regions to have more than needed. Second, geography formed an almost insurmountable barrier for transport.

China’s foreign policy is an extrapolation of domestic policies. In its long history, China has recurrently been the victim of aggression from the outside—from its northern border and from the sea—while at the same time going through domestic turmoil. In between, it has enjoyed spells of peace and prosperity nurturing a culture and civilization second to none. Another spell of peace and prosperity is ambition.

Military threats from the outside have the potential to derail this ambition. To pre-empt this risk, China has sought a zone to protect it against potential aggressors (cordon sanitaire). In Chinese eyes the risk is real. The U.S. military is present close to China’s borders. Warships sail through the South China Sea. Intelligence aircraft flies close to its borders. China’s military presence is confined to the homeland. It is difficult to find much evidence of ambitions to project power globally.

China’s large population and phenomenal economic growth manifest themselves in policies vis-à-vis the outside world often depicted as aggressive. China needs resources that are limited on Chinese territory. It needs energy. It cannot feed its own population. China’s access to the global economy is vital to keep its economy humming. Also, its drive for modern technology makes it interested in acquiring technology from more advanced countries.

No other large country in the world faces a quandary comparable to China. And it does not ask for much knowledge of arithmetic to realize that the scale of China’s predicament spills over into problems for the global economy. China encroaches on other countries need to stoke their economies, conducive to making adversaries or even enemies.

China’s perpetual struggle to overcome natural disasters and scarcities is the key to understanding its policies. The CPC acts as any other dynasty. It strives to secure its hold on power—its survival. This requires access to the global economy and resources abroad. Established powers may view the CPC as aggressive for the simple reason that China asks for a share of what it thinks it is entitled to without squinting at the policies it chose to obtain its goals. In reality, China’s rise and posture are compatible with Great Britain and U.S. behavior as global powers. The sole differentiation is that China is now doing it.

Any comparison between the Soviet Union and China is piffle. Containment will not work. Instead, adjustment and adaptation of the global system reflecting the size and needs of the Chinese economy stand a chance of success. It can be done. China is not a systemic enemy. It wants to be part of the global system.

Such a policy connotes a Western retreat from its hitherto privileged role in the global system. It may hurt and be costly but the price for such a policy will definitely be lower than confronting China, which risks leading to a military conflict.