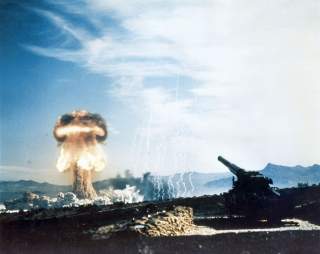 The North Korean state is a national gulag. The regime is illegitimate, unstable and totalitarian—and a proliferator of nuclear-weapons technology. It brings nothing to the world but misery, widespread death to the Korean people, suffering and political instability.

Foolishly, the state is sustained by China, which thinks that it would be better to sustain North Korea than to facilitate its collapse, which might lead to a larger U.S. presence on the Korean Peninsula. But this thinking is politically shortsighted: the collapse of the North Korean regime would allow the Republic of Korea to absorb the North, thereby ending the entire reason U.S. forces are on the Peninsula. American forces would likely leave Korea, not grow, once the Pyongyang regime collapses.

Further, it was China that gave North Korea many of the ballistic-missile technologies that it uses to threaten us and our allies. China is not timidly and reluctantly standing with North Korea; it is, as usual, actively contributing to the North Korean mess. China uses North Korea to shove the United States away from Asia and keep Western diplomacy off balance, defensive and uninitiated.

Since China would greatly oppose Japan becoming a nuclear-weapons state, should Japan declare its intention to start a nuclear-weapons program in response to these repeated, unjustified and deeply threatening provocations by the Pyongyang regime, China might finally realize that it is in its interest to facilitate the collapse of the totalitarian regime in Pyongyang and allow the Seoul government to absorb the North. The United States could reassure China that U.S. forces are in Korea only to defend the South Koreans. And Japan could assure China that its program is entirely defensive and would likely be suspended, should the North Korean regime collapse and the peninsula become completely denuclearized. A Japanese nuclear-weapons program would be entirely within Japan’s constitutional rights, given the North Korean nuclear-weapons program.

The U.S. nuclear umbrella for Japan is made credible by the presence of U.S. forces in Japan (which is declining, given our indebtedness and weakening of alliances), the presence of U.S. naval forces in the region (which is being challenged by China) and a strong commitment by the U.S. government (which is questioned these days). But if, of course, North Korea successfully develops an intercontinental ballistic missile and a compatible nuclear warhead that could be delivered to U.S. soil, then the same threat to the U.S. nuclear umbrella that occurred in Europe will occur for Japan and the Republic of Korea: North Korea might have the capability to strike either with a nuclear weapon and then deter the United States from retaliating with the threat of a North Korean nuclear weapon on top of an ICBM. The North Korean ballistic missile program threatens the credibility of the U.S. nuclear umbrella. Japan and the Republic of Korea have every right—in fact, a duty and a UN-protected right—to self-defense.

Since the initiation of a Japanese nuclear weapons program would provoke China into concluding that North Korea is far more trouble than it is worth as a buffer against U.S. forces in the South, the people of North Korea would benefit the most, since they suffer daily. The goal is to collapse the Pyongyang regime peacefully, much like the East German regime collapsed. This is also the best means to effect true nuclear counter-proliferation; without it, the world will have to live with one more totalitarian nuclear state—a nuclear North Korea—forever.

If the Chinese played chess and not tic-tac-toe on the Korean Peninsula, they would maneuver to collapse the northern regime by first opening Chinese borders (like Hungary did to East Germany) and then provide asylum to the Northern political leadership and general officer corps and ask Seoul to assume economic and political responsibility for the entire Korean people, in exchange for a nuclear-free (and U.S.-military-free) Korean Peninsula. The Koreans (and Japanese) would jump at the deal. And the Japanese nuclear-weapons program would end.

At present, the Chinese wrongly think that they can tolerate the North’s antics and provocations, because they assume the Kim Jong-un regime is not serious with its threats to start large-scale conflict, and North Korea serves a purpose of keeping the Americans in the South. The North acts out with these threats to secure its continuation and appearance of legitimacy with the rest of the world, seeking a peace treaty/agreement with the United States that will allow it to continue unthreatened and deter Western designs for the Pyongyang regime’s collapse.

The Chinese government must conclude that North Korea is far more of a strategic danger to China than a unified and strategically neutral Korea under the governance of Seoul. A Japanese and South Korean nuclear-weapons program would bring a geostrategic situation clearly less favorable to China. At present, politicians in the West are too timid to recommend such a step, and cling to shallow arguments that the world should be rid of nuclear weapons—so that only rogue states will have them.

James Van de Velde is Adjunct Faculty at the National Intelligence University, the Center for Advanced Governmental Studies, Johns Hopkins University and the Edmund Walsh School of Foreign Service at Georgetown University. The views expressed in this article are those of the author and do not necessarily reflect the official policy or position of the U.S. government, the Department of Defense, or the National Intelligence University.