God, Realism and the Limits of Power 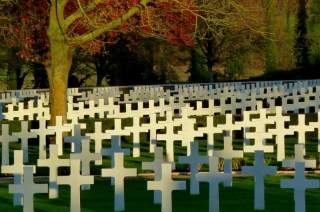 Last week, The American Conservative hosted a half-day conference on foreign policy “Realism & Restraint,” together with George Washington University’s political science department and the Charles Koch Institute. One of its panels was dedicated entirely to “What Religion Means for U.S. Foreign Policy”: a timely recognition of religion’s role in the global anarchy of 2015.

Realists believe war can be a necessary evil in the defense of core interests; Abrahamic religion affirms that God and morality constrain the legitimacy of violence. At the same time, some say that religious motives blind actors to their true self-interest, threatening to overshadow and prolong deadly and intractable wars.

Damon Linker concentrated in his remarks on the specter of just war theory. The centuries-old Catholic framework for assessing military action has haunted American foreign policy over the past fifteen years—becoming, for Linker, “a moral, theological and intellectual fraud” as exercised by the Washington establishment. America’s “default setting,” Linker said, is simply “to careen toward conflict,” and a thoughtful bureaucrat is far likelier to invoke jus in bello (the rules for proper conduct in battle) than jus ad bellum (the stringent standards for going to war in the first place).

“Americans are already too ready to believe in their own righteousness,” Linker claimed. “They certainly don’t need theologians telling them their good intentions entitle them… to appoint themselves the world’s benevolent despot.”

Panelist Samuel Goldman, of George Washington University, traced that attitude back to America’s own founding, tracing the explicit ties between early American Puritanism and latter-day Christian Zionism. Seventeenth-century Massachusetts preachers Peter Bulkley and Increase Mather linked American settlers’ piety to the eventual fulfillment of God’s covenants, made with both the Jews and the Gentiles.

The same spirit later imbued twentieth-century Protestant theologians who transfigured the U.S.’ founding theologies into a moral obligation to support a Jewish state. According to Goldman, the ugliness of the Vietnam War broke that spirit in mainline Protestantism—and revived it for evangelicals and fundamentalists.

In modern Israel, politics and history continue to tangle with idealism. TAC’s own Noah Millman posited that while the Israeli-Palestinian dispute was once primarily a realist’s dream, based on cut-and-dried national territorial interests, the conflict has become far murkier in recent decades. The founders of modern Israel were secular Jews, and early Arab nationalism was led by Christian intellectuals. It wasn’t until 1967 that partisans of both sides came to sacralize the conflict. Today’s loudest voices are the Palestinian groups forged in the first intifada and the Likud party’s religious-nationalist fusionism: each mobilizes closely held religious aspirations to politically intransigent ends.

For Millman, the key is that “there’s nobody in charge of these religious movements”; the internet in particular has allowed legitimate authority to weaken and devolve into the court of public opinion. The conflict’s religionization, together with the increasing decentralization of religious authority on each side, deepens the dilemma for U.S. policy makers who try to stay hopeful. As an officially secular country, “we don’t have the standing to take sides in internal religious disputes,” and as the stakes move from the material to the supernatural, mediators’ jobs get tougher and tougher. This is not territory where hardheaded realists know how to tread.

The last speaker was Fr. Thomas Zain, a representative of the U.S.’ Antiochian Orthodox Christians, whose administrative roots lie in Syria and Lebanon. In contrast to the others, he offered not a treatise but a plea—for recognition of the Middle East’s Christians, who remain caught between some of the region’s most obdurate threats.

Much has been said about this population, in light of muddled U.S. policy toward Syria and Iraq as well as other great powers’ interests in the region. Zain suggested that decision makers have been blinded by their own ideals: Washington knows who its supposed enemies are, including Bashar al-Assad and ISIS, “but who are we for? Some imaginary moderates that don’t really exist?”

Meanwhile, the humanitarian toll on some of the region’s most vulnerable people has led to calls for a protective enclave, or a preemptive transitional government to push out Assad. But for Zain, the only just goal for Syria is peace—from which a tenable modus vivendi can presumably emerge.