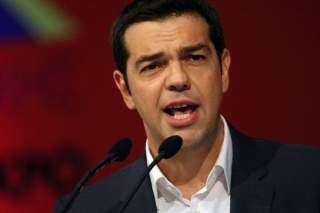 Alexis Tsipras’ Syriza party came to power in Athens with promises to end austerity and to renegotiate the terms of Greece’s economic assistance from international creditors. But six months of seemingly endless rounds of talks with the IMF and leaders of the eurozone countries have produced nothing—except, perhaps, additional evidence that heavily indebted Greece lacks whatever it would take to squeeze meaningful concessions from those sat across the table.

In a dramatic bid to end the stalemate and bring matters to a head, Tsipras has decided to go for broke by calling a referendum on whether or not Greece should deign to accept the “humiliating” terms of the extended economic lifeline. On July 5, Greeks will vote in their first national referendum in over forty years to choose between the rock and the hard place: accept the creditors’ terms and swallow another round of swingeing cuts to public expenditure, or reject the deal and resign themselves to life outside of the eurozone.

A cynic might argue that this is Tsipras’ way of abdicating responsibility for Greece’s future. Unwilling for his Syriza party to take the blame for accepting the crippling diktats of the IMF, European Commission and European Central Bank, Tsipras and his outspoken finance minister, Yanis Varoufakis, might well have concluded that it would be better for Greek voters themselves to sign on the dotted line. And if Greeks vote against the bailout and implicitly for leaving the eurozone, then so much the better: Syriza will be free to lead the country back to true independence by resurrecting the drachma, setting a value on its currency that will allow the country to trade competitively with its neighbors, and begin the long march back to social and economic recovery.

The less cynical and more charitable retort, of course, is that it’s only right and proper that the Greek electorate have the final say on such a monumental decision. As the Syriza MEP Konstantinos Chrysogonos recently told the BBC, the government in Athens has absolutely no electoral mandate to impose further austerity on Greeks—quite the opposite, in fact. From this perspective, it would be an abuse of trust for Syriza to accept the deal. Still, it would stretch any conception of democratic propriety to argue that Syriza’s six-month old promises to the electorate mean that Greeks should not even be allowed to consider what is being offered to them by international creditors. Somehow, Greeks need to be allowed to deliberate. Absent fresh elections, a nationwide plebiscite is the natural solution to this conundrum.

Alternatively, the referendum plan might have less to do with domestic politics and more to do with international negotiating tactics. Tsipras’ hope, perhaps, is that another demonstration of Greek impatience with austerity—loud, proud and unequivocal—will remove any and all uncertainty regarding how far his government can compromise with its creditors. The plebiscite will clarify beyond doubt just how far Greece is willing to go—and, by extension, how far the Syriza government can be expected to compromise. Tsipras will have proven his government unable to accept the troika’s demands, deftly placing the ball in the creditors’ half of the court when it comes to finding concessions.

But if this is a last-ditch attempt to improve Syriza’s bargaining position, then it might not turn out to be a very successful one. Greece’s creditors are unlikely to take kindly to their proposals being decided at the will of the Greek people. This is not the way that the process was supposed to work, they will complain.

Indeed, the signs are that Tsipras’ move has only served to anger those whom he must ultimately bring around if Greece is to survive in the eurozone; the EU’s finance ministers have already refused to extend Greece’s existing bailout beyond June 30, so that it might stay in effect until the referendum can take place the following Sunday.

After all, the other eurozone leaders can be forgiven for asking why only Greek voters should be able to weigh in on a decision that affects the entire eurozone and, indeed, the wider world economy. After all, is it not the case that Angela Merkel and her fellow European heads of government must also answer to their own electorates? How are they to explain to their citizens that European-level policies are being set because of the intractability of Greek voters? Indeed, if the argument of Tsipras and Varoufakis is to be taken to its logical conclusion, shouldn’t important deals of this nature be subject to ratification by all of Europe’s national electorates? And if so, what is the realistic likelihood that any bailout—let alone one on the relatively generous terms desired by Syriza—could be put in place? The truth is that neither side has much patience left for the other.

These really are tragic and unforgiving circumstances for Greece. Unwilling to impose yet more cuts on their beleaguered citizens, yet unable to persuade their creditors to shift positions, there really are no good options left for the leadership in Athens. This referendum probably won’t help to loosen the constraints, but it might help to bring a new future into focus. If life inside the eurozone has become so intolerable, then life outside it must seriously be considered. And what better way to initiate that conversation?